(This is my article last week for thelobbyist.biz, Killers, the Police and the State)

The main function of the State is to protect the citizens’ right to life, right to private property, and right to liberty. When people have peace of mind that they can work until midnight if they have to, and worry little that muggers will accost them on the roads as they go home, or thieves will boldly enter their house at night, then people will become more productive. The economy will be dynamic, lots of jobs will be created, and poverty will be cut. Only the lazy and irresponsible will remain poor.

It is very important, therefore, that the justice system, from the courts to the armed forces like the police, are well-disciplined, well-motivated, and well-respected. If any of those pillars of the justice system are corrupt, then people’s respect for the system will decline if the rule of law – law against killing, against stealing, against kidnapping and hostage-taking, etc. – is not promulgated, people will be less productive as they have little peace of mind that the State can protect them and their family members from the bad guys. 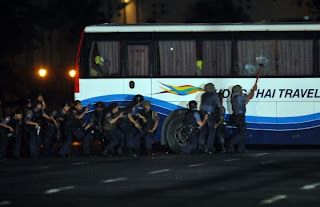 The handling of the hostage-taking by the Philippine National Police (PNP) was so bad, many people think that everyone was a loser.

Hong Kong lost eight of its citizens who came to Manila as tourists and visitors, and ended up as dead hostages. The others were wounded and hospitalized.

The Philippine tourism and investment industries lost thousands of potential foreign tourists and businessmen who were either scared to come or were discouraged by their governments to come to the country. From airlines to hotels, restaurants, travel agencies, travel guides, souvenir shops, to domestic investment, everyone was a loser.

The Filipino taxpayers who pay for the salaries, training, travels, guns and cars, pension and other perks of the PNP, are losers too. We taxpayers expect competent troopers who can deal with killers and hostage-takers quickly.

We taxpayers who are unskilled and scared to face people with guns, have to trust some guys who said they are brave enough to face armed killers, armed robbers, armed kidnappers, armed hostage takers. That is why they joined the PNP. 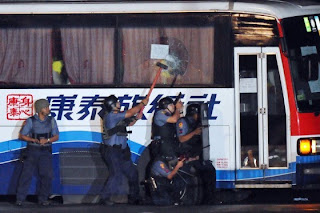 When those troops took so long to end a hostage taking involving many persons, much worse resulted in death of many hostages, we feel we are paying for incompetent troopers.

If the PNP sent a Rambo-type of policemen, they may have been wounded or killed while doing their job, the image of the PNP would have been different. The PNP would be seen as uncompromising brave heroes who kept their words in protecting the citizens’ right to life, even at the cost of their own lives.

But the PNP sent cops who were nervous even in breaking the bus door, in breaking the front glass. The cops who smashed those two doors lost grip of the ax they were using, most likely because they were nervous. If the hostage taker totally flipped his mind, he could have killed all the remaining hostages as it took several minutes more before the police resumed their assault.

A friend from Hong Kong asked, "what turned this ex-police officer to become a murderer? Is the system so corrupt that he had to do crazy thing to put the whole system into trial?"

Yes, the police system is corrupted. That ex-police official turned criminal was dismissed because of some extortion cases. Perhaps he felt bad being singled out and dismissed from the ranks, knowing that there are many other crooks in the police hierarchy but were not dismissed, some were even promoted to higher positions.

This was another instance where corruption causes more disappointment, triggering hostage-taking and caused national shame before millions of eyes around the world.
------