Government-sponsored housing (directly provided or financed or subsidized) is among the “human rights” and entitlements that many welfarists argue as a “basic government function”, along with “healthcare is a right”, “education is a right”, “agri credit is a right” and their various cousins and derivatives.

I am a month-end (or “trying-hard”) farmer and a lower middle class urbanite. Since I go to the farm (Pangasinan, northern Philippines) every 3 to 4 weeks to visit a farm that I manage (I don’t own it), my dogs (I used to have 7, now down to only 4) and our farm caretakers, I need to have my own house there. And since I want to live in Makati where I hold an office but I also cannot afford to buy a condo or townhouse, I have to continue renting a place. 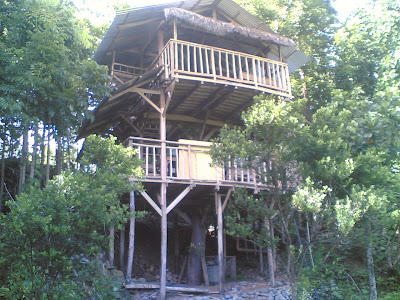 So I got no house in Metro Manila despite various government housing “programs” (to be discussed in future postings) but at least I got a house in the farm. It is easy and non-costly to put up a house there, an all-wood house, because we have lots of trees that we planted since the early 90s. And this is what I got there – a treehouse! 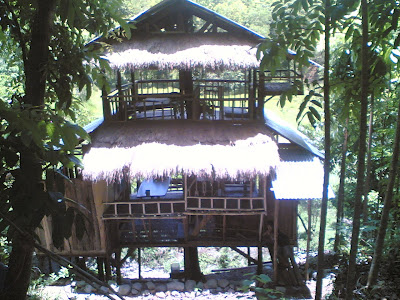 It’s a 2-storey, all-wood, no walls (except the toilet, of course), slatted-bamboo floor, house perched on a big and live mahogany tree. We built it around March 2005, so it’s more than 5 years old now. The tree carries the bulk of the weight of the house, but there are 8 smaller posts that help support the house and give it more stability. 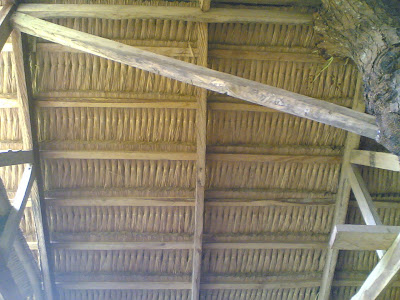 The roof used to be cogon, neatly tied and arranged. It’s cool, not hot on cloudless days and not noisy when it rains. But remember, this house is perched on a live tree. The tree’s trunk on ground floor is getting thicker but not rising. The second floor though is rising by about ½ to ¾ inch per year. And the trunk where the roof is clamped is rising by about 3 inches per year! The roof has to be repaired every 2 to 3 years as rainwater slowly seeps into the trunk and into the house. 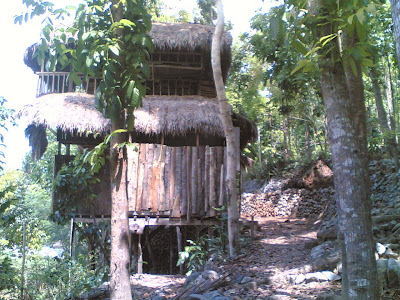 This is the house until early 2009, before we changed the roof to iron. Termites were able to climb up the house and they like munching the rain-soaked cogon roof a lot, contributing to the damage to the roof. The part covered by wooden slabs is the toilet. Notice the stone terraces on the right side, fronting the treehouse. 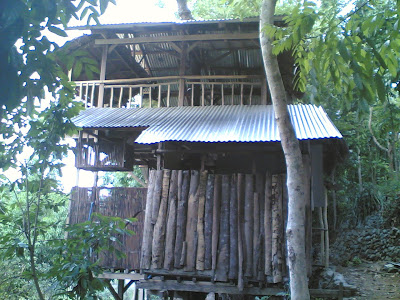 And this is the house this year. The cogon roof at the ground floor and second floor has been changed with galvanized iron. The termites on the roof are gone. It’s not so hot during cloudless days, mainly because of the surrounding trees and their leaves. But it can be noisy when it rains though. 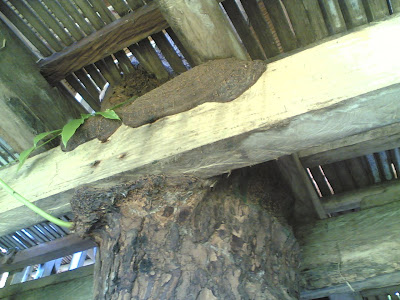 I mentioned above that the 2nd floor is rising by about ½ to ¾ inch per year. The tree’s trunk is rising and getting bigger there, it is trying to move apart the two huge 3 x 6 inches support beam of the 2nd floor. Since the beams are well-secured, the tree has tried a new tack: if it cannot push them away, it will swallow them! 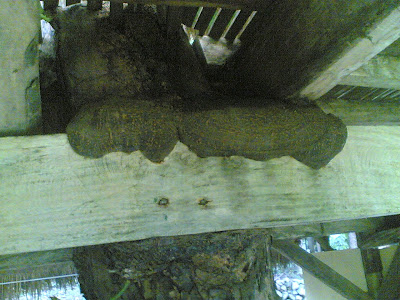 A close up view of the thick new “lips” of the tree. At the rate the “lips” are moving and expanding, this part of the wood will be entire swallowed in 3 to 4 years. I do not know if this will break the wood or it will strengthen it by then. 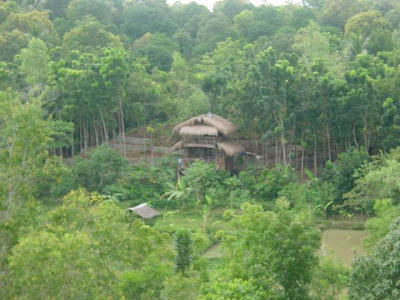 This is a view of the house 5 years ago, sometime in April or May 2005. Notice the trees surrounding it were still thin and small. 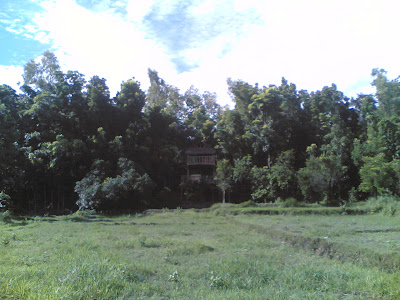 And this is the house last month. The trees surrounding it have become bigger and taller. At least two big and leaning trees have been cut already as they posed danger to the house during typhoon season. 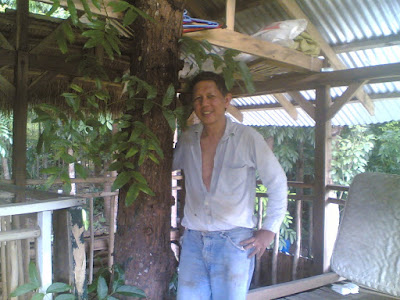 A view of the house on the 2nd floor. Yes, those are live new leaves and branches that grow on the trunk. We have to remove some of them; otherwise, they will grow even bigger and occupy the entire house. 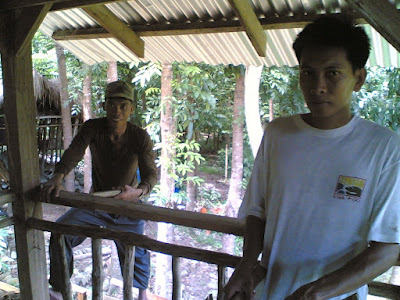 A tall, “Tarzan-like house” would need a Tarzan-like carpenter. That carpenter is Charlie Espinoza, the one on the left. Charlie is cool: a rice and vegetable farmer, tricycle driver/mechanic, carpenter, various other jobs, He’s the one who repaired and/or changed the roof. Assisting him, on the right, is Danny Paragas, who also assists his father, Nong Endring Paragas (not shown here) in taking care of the farm.

For those who plan to build their own treehouse too, the first thing to do is to have many trees near your area. Plant trees now on your private land, or take care of those that have grown naturally. Take note that the operative term is “tree growing”, not just “tree planting”. The former means planting trees for the long-term, the latter describes tens of thousands, of such activities every year. An average “tree planting” activity by various groups consist of 99 percent tree planting and 1 percent monitoring. After the picture-taking and being published in some newspapers or posted in some online sites, the newly planted seedlings are left on their own. After a week or a month, many of those seedlings are dead – choked by vines and tall grasses, or got burned in forest fires, or eroded by heavy rains and flash flood, or got trampled by farm animals, etc.

Note also that it is very bureaucratic to cut and transport trees even if you’re the one who planted them on your private land. To deal with the forest bureau of the Department of Environment and Natural Resources (DENR), at the central or regional offices, is time consuming and costly. A way to avoid such bureaucracy is to remove the need to transport by truck the wood that you need. Have the trees you need to cut someday be near the house that you will build.
--------