Not all types of coercion are unproductive, like when parents coerce their kids to stop watching tv late at night and sleep early. Or when government coerce criminals to go to prison.

But most coercions imposed by government are unproductive. Like high and multiple taxes. That is why taxation has to be done by state coercion, there are legal, political and armed components of the state to enforce taxation to those the state administrators want to run after.

Business taxation is among those taxes that many people hate to pay. The higher the business taxes, the more that the state is penalizing success and good performance. That is why many business people hide their real enterprise and personal income whenever possible. And one way to do it is to do business via the "underground" or "shadow" or "informal" economy. 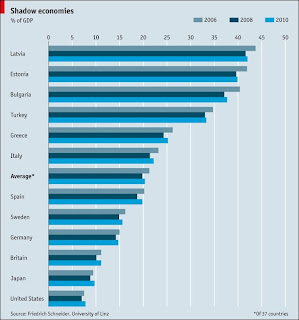 Here's a chart from The Economist magazine. It shows the (estimated) percentage of a country's GDP that is not covered by state (and federal/national) taxation. (

Note that while the figures for 2008 showed a decline from their 2006 levels, the figures increased again this year. The Economist has this explanation:

Mr Schneider attributes this reversal to the financial crisis, which seems to be pushing more people in OECD and EU countries to avoid the extra burden of taxation by resorting to informal transactions. The shadow economy, in other words, can act as a cushion when times are tough.

Right. And governments should recognize that. Any amount of money not siphoned off by the government through taxation will be used by the people for their personal or household or community or corporate needs, like expanding the business, hire more people. More jobs created by the private sector means less people expecting dole-outs or welfare from the government.
Posted by Bienvenido Oplas Jr at 9:51 PM