More rains because of global warming

That statement comes from the Philippines' top climate official next to the President, the Vice chairman of the Climate Change Commission (CCC), Heherson Alvarez. In a news report yesterday, Brace for La Niña, local gov’ts told, a DA official and Mr. Alvarez were quoted,

“La Niña is expected around September and October,” said Dr. Esteban Godilano of the DA’s Planning and Policy Officer. “According to studies, it may still be extended even up to February,” he noted. 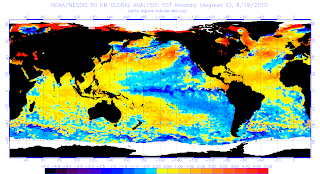 And this is the chart of the SST anomaly as of August 18, 2010. Global SST anomaly is not yet negative, just heading there, but Nino region 3.5 (East Pacific, South America) is already negative since last July or late June.

Graphs' sources are from Dr. Roy Spencer.
Posted by Bienvenido Oplas Jr at 10:35 AM