Strong structures, transparent and properly registered businesses are among the important protection of people against natural calamities like strong storms. An informal business tends to have informal physical structures in order to evade being noticed by government regulators as doing well, that way they can evade paying many taxes and business permits.

The tragedy of the Itogon landslide in Benguet that buried many small-scale miners living in shanties is an example of an informal business having little protection against big calamities like typhoon Mangkhut and landslides last week. It is a tragedy that may have been prevented or the damage could have been minimized if people live in stronger structures instead of shanties.

The issue of various business regulations and taxes affecting the mining industry is among those discussed at the Mining Philippines 2016 at Sofitel Hotel, September 18-20 this week.

Yesterday, one of the panel discussions was on “Opportunities and Challenges in the Mining Industry.” The speakers and their topics were (1) Ms. Rafaelita M. Aldaba, DTI Assistant Secretary, “Roadmap for the Mining Industry Development”; (2) Dr. Ronald U. Mendoza and Jerome Patrick D. Cruz of the Ateneo School of Government (ASOG), “Mining Through the National Security Lens”; (3) Mr. Gary Olivar of the Foundation for Economic Freedom, “Impacts of Federalism on Natural Resource Extraction”; and (4) Dr. Cielo Magno of the UP School of Economics, “Energy Cost and the Development of the Downstream Extractive Industry Sector.”

Heavy and sometimes irrational regulations like banning open-pit mining and closure of companies based on frivolous and non-transparent criteria, done by an ex-environment secretary who was rejected and discredited by the Commission on Appointments, create lots of uncertainties in the sector. Many big mining projects worth billions of dollars cannot proceed or come with great caution (see table). 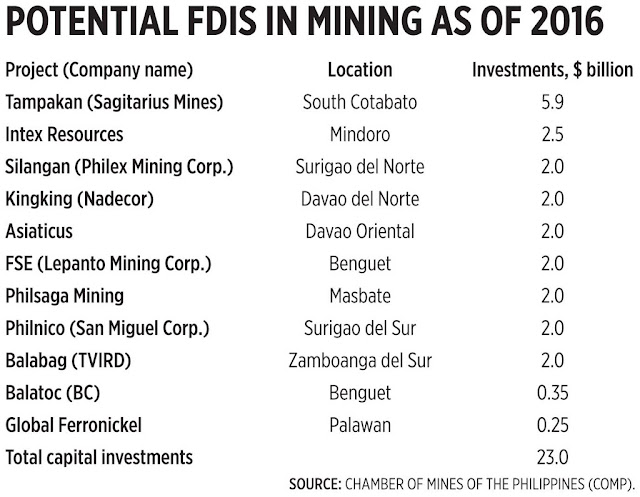 Government does not create wealth in society. It only regulates and taxes the wealth creators, businesses and entrepreneurs and their workers. It is important, therefore, that government regulations should be not too cumbersome and creating exemptions.

Government should enforce the rule of law. The law applies equally to unequal people and players. The law applies to both governors and governed, administrators and administered. No one is exempted and no one can grant exemption and favoritism. Making exemptions means the rule of men, not rule of law. And, speaking of the rule of law leading to economic development, wealth and prosperity for the people,as developed Asian economies exhibit this, like Japan, South Korea and Singapore.

Singapore, in particular, started as a very poor economy after it was kicked out of the Malaysian federation in the 1960s. Its first leader and strongman, Lee Kuan Yew, was very strict in enforcing the rule of law to instill discipline and respect of private property. In the process, he was able to attract lots of investors in the small and fledgling economy, make them stay for the long term.

Mr. Jose “Joey” Leviste, Chairman of Oceana Gold, one of the major sponsors of Mining Philippines 2018, published a book, “If the Philippines had a Lee Kuan Yew” (2015). Joey admired LKY’s “strong, competent, disciplined, decisive and principled leadership” and has collected volumes of articles and books about LKY or written by LKY himself.

And we go back to mining and the rule of law. The DENR’s and local governments’ strict regulations and monitoring of big mining companies should also be done with small-scale mining. Not only for taxation and environmental protection purposes, but also to protect the people’s and miners’ lives. Rule of law can secure private property, encourage more wealth creation, and help preserve human lives.
-----------