TOBACCO, alcohol and fossil fuel products are among the most demonized, most bureaucratized, most taxed products in the country and abroad. Thus, the excise tax for them on top of VAT, income tax and related taxes.

The hypothesis is that more smoking and drinking prevalence means more diseases for the people and hence, people live less healthy, live shorter and more miserable.

The Institute for Democracy and Economic Affairs (IDEAS), a free market think tank in Malaysia, in partnership with Minimal Government Thinkers, our counterpart free market think tank here in the Philippines, will organize a seminar, “Alternative Tobacco Product Regulations: The Role of the Consumers” on Sept. 14, 2018 at the Holiday Inn Makati.

This small-group, by-invitation-only event aims to bring together stakeholders to discuss ways where government regulation of tobacco and alternative products can be optimized — lesser public health harm, government gets revenues, and not encouraging illicit and smuggled products that are cheaper and product quality is unregulated.

Focus will be on e-cigarettes and heated products — should rising restrictions and taxation of the usual tobacco products apply to these alternatives?

Whenever the free market is severely curtailed and restricted, the black market always comes in and thrives. This is true for drugs, certain gambling, smuggling, gun-running, prostitution. All these products and services are legally banned and prohibited and yet all of them exist until today. The black market and illicit trade makes it very lucrative for government regulators and enforcers to allow the prohibited in exchange for handsome personal and financial favors. 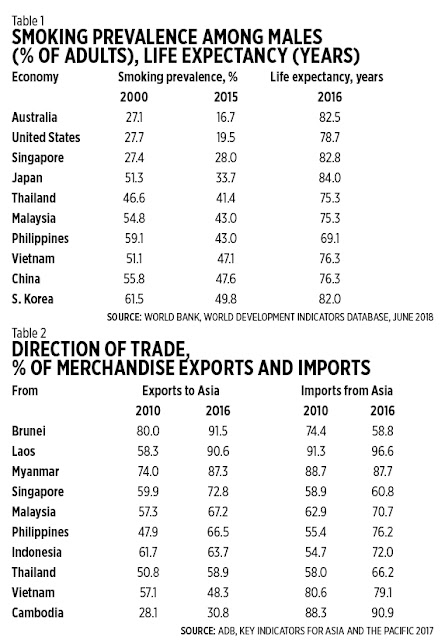 In the afternoon of the same day, IDEAS and the Economic Freedom Network (EFN) Asia will hold another small group, by-invite only roundtable discussion on “Economic integration within ASEAN” also at Holiday Inn Makati.

IDEAS is conducting a research project on two areas related to ASEAN. First, the implementation of the ASEAN Economic Community (AEC) 2025 Blueprint, and second, the prospects for deepening trade relationship between ASEAN and the EU.

As shown in the numbers above, many ASEAN countries are trading more with themselves and the rest of Asia, reducing the share of trade with North America, Europe, Oceania, South America and Africa.

For the Philippines, our high-trade dependence with the US before has significantly declined. Philippines exports to Asia rose from 48% of total exports in 2000 to 66.5% in 2016.

Which leads us to the current issue of “rice crisis,” “bukbok/weevil rice,” and “smoked/fumigated rice.” It is foolish for the government through the Department of Agriculture and National Food Authority (NFA) to retain rice protectionism when the two biggest rice exporters in the world are our neighbors, Thailand and Vietnam.


We should have free trade in rice, get cheaper rice from our neighbors, give cheaper rice to our poor consumers, instead of asking them to endure bukbok/weevil and smoked/fumigated rice. Abolition of NFA as a huge and costly bureaucracy is a good proposal.
-----------------