PRIVATE property rights is among the cornerstone of a free and dynamic economy. If people have no sense of control and ownership over their house, car, cellphone, appliances, savings, they will not work hard, invest, and accumulate wealth both at the household and macro or country levels. They will be in perpetual stress and fear that some bullies can claim and expropriate such properties away from them.

There is a measurement of global property rights protection worldwide being done regularly by the Property Rights Alliance (PRA), a Washington DC-based think tank. It is the International Property Rights Index (IPRI) annual reports.

PRA partners with 100+ independent and market-oriented institutes and think tanks worldwide in producing and propagating this report. In the Philippines, PRA partners are Minimal Government Thinkers and the Foundation for Economic Freedom. 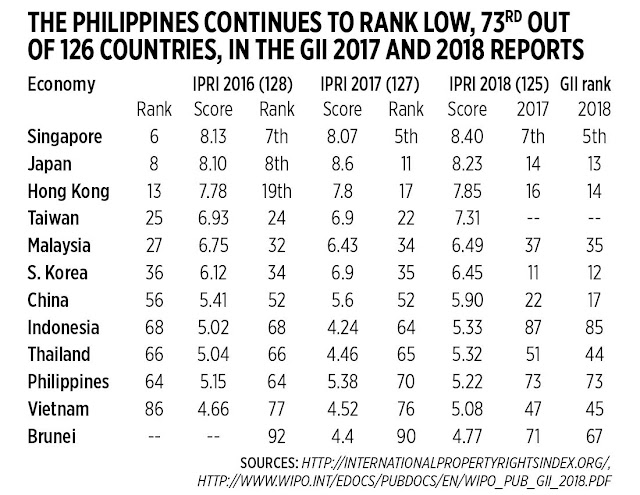 IPRI 2018 was released and launched two weeks ago and out of 125 countries covered, the Philippines ranked 70th, a decline of six notches from 64th in the IPRI 2016 and 2017 reports out of 127 countries covered.

Complementing the results of IPRI report is the Global Innovation Index (GII) 2018 report that was released about two months ago. GII is jointly produced by the World Intellectual Property Organization (WIPO), INSEAD, and Cornel SC Johnson College of Business.

Let us focus on the IPRI 2018 report. The main reason for the decline in the Philippine score and ranking this year is the big drop in the country’s score in LPE, only 3.81 vs 4.14 in 2017. Which means there is a decline in the rule of law, decline in control of corruption, and more political uncertainty.

Countries that are strong on rule of law (the law applies equally to both governors and governed, administrators and administered, little or no exemption) are also the more developed, less-corrupt economies.

The Philippines seems to be moving away from more property rights protection as the current administration veers towards political leftism — rising taxes, rising welfarism, rising corruption, arbitrary closure of businesses like those in Boracay, and disrespect of certain provisions of the Constitution.

Government should focus on improving the legal and political environment, making the rules more stable and predictable. Property rights protection is inconsistent with political leftism.
----------------