Indonesia and Vietnam had more than five times that number, Thailand more than six times and Malaysia had ten times more vehicles than the Philippines. Bulk of these countries’ vehicles though are two- and three-wheeled, like motorcycles and tricycles/tuktuk (see table). 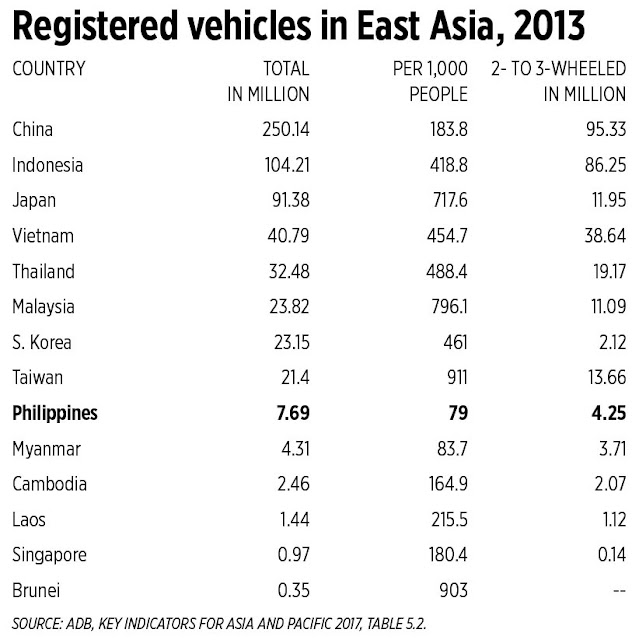 These numbers indicate two implications for the Philippines.

One, our numbers were understated because many vehicles here were not registered with the government — LGUs for tricycles and kuligligs, and LTFRB for motorcycles, cars, jeeps, buses, etc.

What does this imply?

Many vehicle owners no longer bother to register their vehicles because doing so involve complicated and expensive procedures involving national and local bureaucracies.

Land transport modernization and the bureaucracy

Compare this with Japan, Taiwan, and South Korea.

All these three countries offer convenient rail-based mass transportation but they still have high vehicle to population ratios.

This is probably because vehicle owners aren’t discouraged by lengthy and tedious bureauractic procedures when they register their vehicles.

Last week, the agency reiterated its fare “rationalization and streamlining” TNVSs and TNCs.

As a result, fares which it deems “non-rational” will be disallowed and in the process, innovation and modernization by private players will be discouraged.

Those who choose to ride TNVS are those with specific needs, not the LTFRB officials and bureaucrats who ride in taxpayer-funded vehicles and gasoline/transportation allowance.

No one put a gun to force commuters to ride “expensive” ride-sharing vehicles — they do so because they have specific needs (i.e., they’re either carrying huge amounts of cash, important documents, or equipment or must rush a patient to a hospital emergency).

So when LTFRB continues with its fare control policy like disallowing per minute charging in heavy traffic or flooded streets, they discourage the supply of vehicles in those areas where demand for such transportation is high. LTFRB is the agency to penalize commuters and trap them in those areas.

Also last week, the Philippine Competition Commission (PCC) has approved the Grab-Uber deal but imposed several conditions under “Commitment Decision” with high penalties for any violation.

Among the conditions are:

• service quality, pricing (Grab to bring back market averages for acceptance and cancellation rates before acquiring Uber, penalty up to P2M in routes with extraordinary deviation from minimum allowed fares);

• driver/operator non-exclusivity (Grab will not introduce policy that will prevent drivers and operators from operating with other TNCs);

I think the better option for the PCC is to talk to LTFRB, DoTr, SEC, etc. and ask how other big global and regional players like Lyft, Didi, GoJek can come to the Philippines and compete with Grab. Or how to hasten the merger of existing new but small players so that they become big soon and compete with Grab. 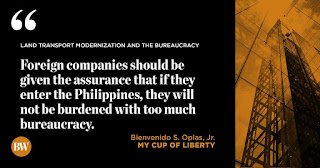 If PCC makes the business harder and more bureaucratic for Grab, that is a signal for other big players like Lyft and GoJek to think twice going into the Philippine market. They put big money, time, and resources here and they can be subjected to difficult and bureaucratic conditions like what the LTFRB and PCC are doing to Grab now — why bother to invest here?

Let Grab and new domestic players introduce various innovation in pricing and marketing, show the other big players abroad that if they do business here, government will not over-bureaucratize them. They will be allowed to do many things except to use their accredited vehicles to commit crime or terrorism.

Government should step back from increased fare and price control and allow the customers penalize the abusive and greedy players by boycotting them and move to other bigger, more efficient players.
-------------