Lion Rock 24, Is everything under control?

I am reposting another good article from a friend, Nick Smith of Lion Rock Inst. in HK. This was published in March 2018. 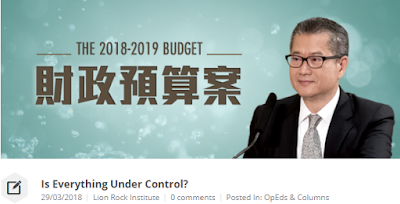 Is Everything Under Control?

You may not think it from my title but this piece is about the Budget. Let me explain. Human beings, when faced with the chaos of nature, crave some degree of certainty. Governments respond to that innate desire with welfare programmes, the promise to outlaw or regulate all unpopular behaviour, and other measures that promote the idea of keeping society “under control” for the public good. What, you may ask, has the budget got to do with that?

Let’s take a step back from the myriad individual tax changes, Government subsidies, incentives and the other minutiae that the media tend to obsess over with any budget. The immediate news round is taken up by a litany of groups who didn’t get a handout or received too little. Our local Santa Claus never gives out enough presents to satisfy those with their begging bowls outstretched. But behind the usual post-budget noise what longer term trends can we discern?

Budgets can be broken down into three parts. How much does the Government take from individuals and businesses? What does it spend it on? Can the first element fund the second? In much of the world, the third question gets most attention. How big is the “deficit”? Is the borrowing or money printing required to make up the difference a problem? Because Hong Kong typically does not have this problem, attention can move to the first two. On the face of it, since the government takes much more than it currently spends, an obvious solution would be to cut taxes. Yet this is not seriously considered by Government, nor by commentators or political parties. Of course there is a debate about “handouts” but not about tax reductions. (The idea of “giving back” something the Government took in the first place is rather odd. If I take $100 from your pocket and then give you $20 back, is that a handout?)

Instead of thinking about a lower tax economy, the debate and pleadings are about how the cash is spent by Government. The Government has the wherewithal to do “more” for society. The assumption is that it is a positive thing for the government to be able to spend more, without thinking that the private sector is thereby spending less, because of the excess taxes paid. In a Western economy, this focus on spending would hardly be a surprise. But Hong Kong’s reputation as a free economy has been built on low taxes and small government. These principles have the combined effect of leaving a large portion of daily life in the hands of individual choice. Moves to reduce the size of the private sector and grow the Government ought to attract a lot of attention here. But since the handover, and with increasing frequency since C Y Leung’s tenure as CE, voices have been raised against free market principles. These voices now come from within the Administration as well as from political parties. Positive non-interventionism had already been denounced as out of date long before this budget. Now two more nails have been hammered into free market’s coffin.

The risk that pressures would grow to increase the size of the public sector was recognised by the Basic Law drafters. A number of lines in the sand were drawn, in an attempt to provide some barriers that might help administrations resist these inevitable political pressures. I use the metaphor “lines in the sand” advisedly. Such lines can, after all, be erased by a rising tide. And a tide in favour of a bigger role for government is now creeping ever higher up the beach. Two of those lines in the metaphorical sand were that Government spending should not exceed 20% of GDP and that should not increase faster than the growth of the economy. This budget erases those lines from the sand. It does so without any expressed concern or excuses. Instead, the Administration appears to be proud of getting rid of these tiresome barriers to more Government. Yet here was a great opportunity to reassess the overall burden of taxation. A ten year projection could have been made which concluded that a balanced budget could be achieved with, say, taxes reduced to 10% on both individuals and companies. Businesses large and small could then have been able to plan investments with the expectation of higher  returns. But instead of increasing the number of investments driven by private decisions, Government bureaux will guide an ever larger portion of our economy. The IT sector is a classic global example of how entrepreneurial investments can create huge value. The idea that Government committees can help decide what is “right for Hong Kong” in this area by favouring some startups over others is astonishing. Despite a hundred years, and counting, of the failure of state decisions over those of individuals to create sustainable growth, the call for Government to intervene to save us from ourselves never seems to die.

Where does this perennial call come from? At the beginning of this piece I hazarded a guess. The idea that Government can take away risk, make the right choices, protect us from “bad things”, runs very deep. In economic choices this is very damaging. Governments protect the status quo and delay adjustment to change. This disincentivizes new ideas and risk taking. Yet many people crave it. Like a life-long parent, the government makes decisions, allocates pocket money, protects us from harm. This temptation; to expect Government to create a city-wide “safe space” for all citizens; is massively damaging. It disincentives accountability and self-reliance and makes it much harder for our city to adjust to change and cope with threats, because – after all – the Government does that, doesn’t it? But it cannot and it will not. We each need to be accountable for ourselves, to plan for our own futures, to take our own risks, and not think we can outsource these to our bureaucracy. As Hong Kong grew to maturity in the postwar period, these personal accountabilities were widely respected and shared. Step by step they are fading away.

Someone once said “democracy dies in the darkness”, now on the Washington Post masthead I believe. However my concern is that in Hong Kong “freedom will die in the clear light of day”! Freedom can of course be lost at the hand of oppression. But it can also be lost because ordinary people ask, even require, their governments to take charge of their lives; to “take control”. Without the worry of rising taxes (and without asking for them to be reduced), many people spend their time pushing government to get involved in more and more aspects of our lives. The uncertainties of life, which create freedom and opportunity, are rejected in favour of safe spaces of all types. The ultimate “safe space” is a padded cell however.

If calls for the Government to “take control” continue to grow, freedom here will wither like leaves in autumn. It is crucial that these risks are recognised and discussed in our society. Change can happen very fast. In high summer, autumn seems impossibly far away. Yet if you look closely, the leaves are already reddening. In Europe, Estonia has blossomed from a communist winter to a wonderful spring of free enterprise within two decades. Don’t think Hong Kong cannot equally quickly wither from its free market glories to a limp socialist-style economy with too little enterprise to generate the wealth an aging population will need.

The announcement of a huge surplus, with cash handouts everywhere may look like the wrong time to play the fiscal Cassandra. I disagree. The leaves are turning colour in Hong Kong. Don’t assist by pulling them off the tree yourselves.
--------------