The “sharing economy” involves strangers sharing several services among themselves without being forced or mandated by a government to do so. They do so voluntarily, allowing suppliers to earn income for services they are willing to provide to consumers who are willing to avail of them at a price both have agreed upon.

A new report, the first edition of the Timbro Sharing Economy Index (TSEI) 2018, was published last week by several free market think tanks in the world. It was produced by Timbro, the biggest free market think tank in Sweden and the Nordic countries, co-sponsored by other free market institutes like the Americans for Tax Reforms (ATR), Center for Indonesian Policy Studies (CIPS) and the Institute for Democracy and Economic Affairs (IDEAS, Malaysia).

Timbro defines the sharing economy service (SES) as “a platform that facilitates agreements between identifiable suppliers of marketable services and identifiable customers demanding said services. The transaction may not involve any transfer of ownership and is conducted on a case-by-case basis, where neither party is bound to engage in future transactions. The SES activity must lower the costs of transactions beyond merely providing advertisement.”

The index is compiled using traffic volume data and scraped data and some 286 worldwide were classified as SES. Monthly traffic data was collected for the services in 213 countries. The largest company in their data set is Airbnb with almost 1.5 million suppliers judged as active in an average week.

Of these 286 SES companies, one-third supply housing and one-half fall into the broad category of business services.

One drawback of the construction of their index though is that the database is not shown and it underestimates app-centric services. Thus, ride-sharing services like Uber and Grab have not contributed much to the ranking and scoring.

The index scoring seems suspect so I add a factor, individuals using the internet as % of population from the World Bank’s World Development Indicators (WDI) database 2018 since SES is highly dependent on internet connectivity and use. This somehow reduces the pessimism implied by TSEI (see table). 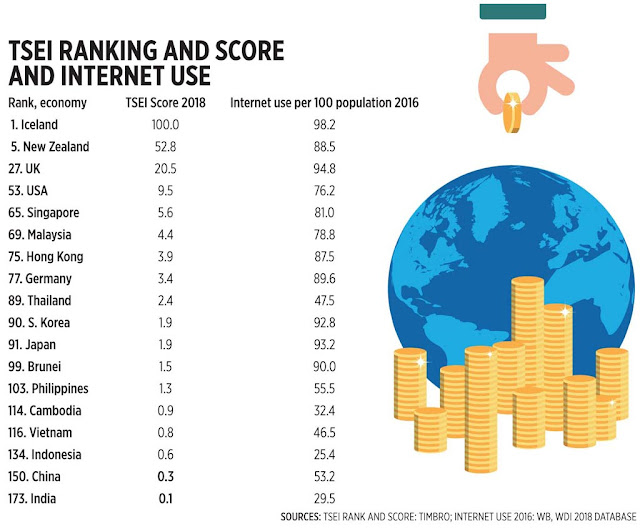 We go back to SES in public transportation in the Philippines and other Asian countries. Buses and taxi are also part of SES but they are not internet-based and hence, lack the transparency and safety that are available in internet-based companies like Grab and Uber. In the latter, even before the car arrives, the passengers already knows the name of the driver, the car model, and plate number. The driver also knows the name/s of the passenger/s even before they meet. This helps establish trust between driver and passenger.

Since SES is a voluntary arrangement between service providers and customers, the providers should be free to expand or reduce their services/vehicles, and free to set its pricing and the customers are free to agree or decline the pricing offered by the providers.

The three levels of control and restrictions practiced by LTFRB — (1) franchise control or limited number of accredited TNVS, (2) surge price control, and (3) abolition of per minute pricing in heavy traffic or flooded areas — are policies that distort the incentives system in a sharing economy.

The agency’s intervention diseconomy can only result in (a) less TNVS supply when demand for them is high and hence, (b) more people stranded in streets and offices unable to go home or their next destinations earlier.

Does LTFRB derive pleasure and contentment seeing thousands of people unable to get safe and comfortable rides daily?

After all, it continues to implement its irrational intervention diseconomy policies. Of course it will not admit this, always providing the alibi that it is “protecting public welfare” even if its policies result in the opposite effect.

A regional player in ride-sharing, Go-Jek, plans to enter the Philippine market.

This is good news on several levels — good for customers because it strengthens competition and expands choices, good for the dominant player Grab because it will deflect or disprove accusations of being a monopoly, and good for new small players because an opportunity for merger with a new regional multinational will allow them to learn more about the sector.