Interest rates ‘will go to hell’ under federalism – Dominguez
Published August 9, 2018, 7:33 AM
By Chino Leyco
https://news.mb.com.ph/2018/08/09/interest-rates-will-go-to-hell-under-federalism-dominguez/ 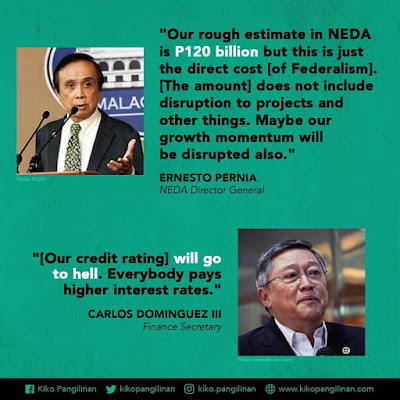 "I was wrong, totally wrong. I had confidently predicted that the consultative committee would be forward-thinking and liberal in its devolution of a new, modern constitution."
-- Peter Wallace, August 9, 2018, http://opinion.inquirer.net/115230/they-didnt-understand

"the draft Constitution is full of social justice gobbledygook, from land reform to housing and urban land reform (the latter section could be interpreted to mean encouraging squatting.)

Yet there’s no modernizing vision: how the country can modernize its politics, economics, and culture and in the process increase the productivity of its economy"
-- Calixto Chikiamco, August 12, 2018,
http://www.bworldonline.com/the-draft-constitution-is-terrible/

"If government does not give our underdeveloped regions the infrastructure and time they need to develop, federalism will consign them to further poverty.
This is why federalism cannot be taken lightly. This is why it cannot be rushed."
-- Andrew Masigan, August 12, 2018, http://www.bworldonline.com/federalism-whats-the-rush/

“The Charter change and federalism initiative of the Duterte administration should be rejected by the people, if they wish to have less bureaucracies, less egocentric politicians like the Speaker, fewer taxes, and more freedom in their lives.”
-- me, July 19, 2018, http://www.bworldonline.com/federalism-cha-cha-and-more-government/