This title is rooted from three recent reports in BusinessWorld:

Report #1 is the realization of a provision in Electric Power Industry Reform Act (EPIRA) law of 2001 that an independent market operator (IMO) be created to operate the Wholesale Electricity Spot Market (WESM), which was created in June 2006. For more than a decade, the Philippine Electricity Market Corporation (PEMC) as market operator was a DoE-chaired and controlled body and hence, was not an independent entity.

I attended the PEMC Chairmanship Turnover Ceremony last July 31 at the PEMC office in Ortigas.

DoE Secretary Cusi has officially turned over PEMC Board Chairmanship to Mr. Jose Aboboto, one of the private industry players in WESM. Atty. Oscar Ala remains as PEMC president.

The IMO technical and secretariat function will be done by the Independent Electricity Market Operator of the Philippines (IEMOP) headed by its first President, Atty. Francis Saturnino “Nino” Juan. In the ASEAN, only the Philippines and Singapore have an electricity market between power producers and distributors/suppliers.

Report #2 may send alarm bells to the climate alarmism and anti-coal movement as if Philippine coal consumption is already substantial and may yet increase. Our coal use in 2017 of 13 million tons oil equivalent (mtoe) was only 1/9 of Japan, 1/7 of South Korea, 1/4 of Indonesia’s 57 mtoe, 1/2 of Vietnam’s 28 mtoe.

In addition, our total primary energy supply (TPES, sum of domestic production plus imports minus exports) is also very small at only 0.52 tons of oil equivalent (toe) per capita in 2016, or only 1/10 of South Korea and 1/9 of Singapore. 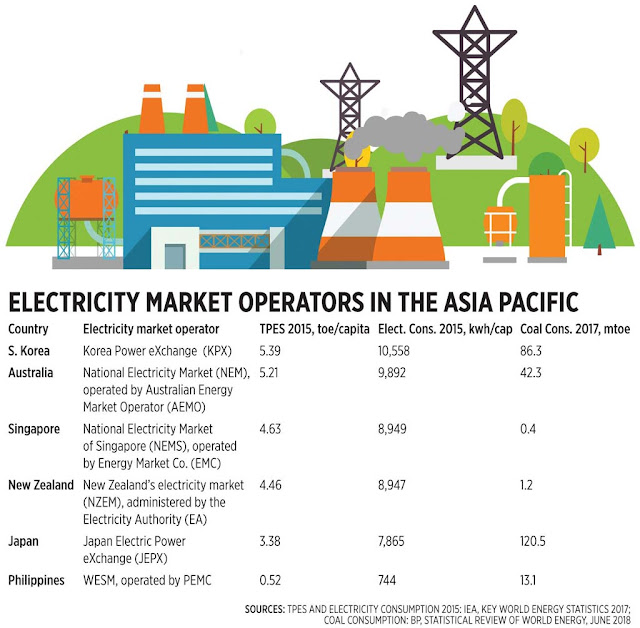 One can conclude that among the big reasons why South Korea, Japan, Singapore, Hong Kong, others are developed is because they have huge energy and electricity consumption. Energy precedes development that is why it is foolish to over-regulate and over-tax power generation, transmission, distribution and pricing. When power supply is huge relative to demand, there is no other way for the price to go but down, resulting in cheaper electricity for consumers.

Singapore has very low coal consumption because it is largely using natural gas, about 98% of its total power generation. New Zealand is more dependent on hydro and other renewables like biomass, geothermal.

Report #3 is about the fear of renewable energy (RE) developers especially wind-solar that the DoE will insist on a competitive selection process (CSP) instead of a “Swiss challenge” for distribution utilities and electric cooperatives in getting their power supply contract. Related to this is the fear of the RE lobby that their tax perks like exemption from VAT, income tax holidays, etc. will be removed under TRAIN 2 bill now in Congress.

A good compromise between expensive, unstable electricity by the RE lobby vs cheaper, stable electricity by the consumers, is to have a uniform feed in tariff (FIT) for all variable REs — wind, solar, biomass and run-of-river hydro — to the lowest FIT level of P5+/kWh. Solar-wind currently get P9+ to P10+/kwh of FIT or guaranteed high price for 20 years.

Solar-wind developers and campaigners keep repeating the mantra of “wind-solar technology are improving very fast, their prices are declining very fast.” If so, their high FIT should be adjusted downwards because high FIT automatically negates that mantra.

If the EPIRA was implemented without distortions like RE law of 2008, we should have cheaper and more reliable electricity market in the country by now. Which reiterates the fact that more competition, not state favoritism, is more conducive to the economy.
-------------