Why Green Energy Experts May Have It All Wrong
By Dr. Ricardo G Barcelona    August 20, 2018
https://impact4all.org/column-why-green-energy-experts-may-have-it-all-wrong/ 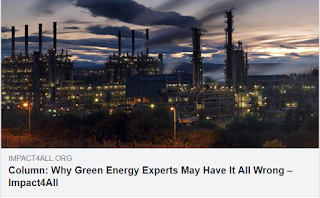 In an eerily familiar narrative, solar power is taking centre stage today in much the same way as nuclear energy was the 1970s. “Too cheap to measure” ushered in an age of energy abundance of limitless possibilities.

Three years into solar power’s volume surge, prices from reverse auctions have reached record lows, with 2018 volumes expected to fall by 25 per cent.

But beyond the rosy headlines, two underlying realities are being missed by policy and investors: Gas remains a viable bridge to achieving secure, affordable and low-carbon energy futures. Renewables’ futures lie with hydro, geothermal and wind, with substantially reconfigured solar and storage a later stage addition….

Today’s policy makers are looking for the silver bullet, where none exists; policy’s well-intentioned benevolence could turn its aspirations into unfulfilled promises. The remedy? A portfolio of supplies should be drawn from available resources in respective markets.

Geothermal is geography specific, good for some countries in the “pacific ring of fire”. Wind is industry-killer nearby (no houses, resorts, hotels, industries, near those giant wind towers as those wind blades, turbines can get burned, fall down, towers can collapse). Solar is anti-green, ALL trees in and near a solar farm should be cut and murdered because solar hates shades, from clouds, rains and tall trees.

Natgas is viable like Singapore is about 98% reliant on gas, Brunei about 100% gas. In Europe and N. America, gas is transported via long and huge gas pipes stretching for thousands of kilometers. This removes the need to liquify then regassify it later.

For some countries far away from gas-exporters like the Philippines, imported LNG and related facilities can be costly: gas to liquid, transport by huge ships, store as liquid then re-gassify when used to fuel a power plant.

Nuke power should be the most viable, very high energy density but many people are paranoid of nuke. That leaves coal power the most optimal source. Easy to transport and store because it is solid, unlike gas.

A commentary by Prof. Dr. Joachim Weimann on Germany’s renewable energies flop appearing in German flagship daily the Frankfurter Allgemeine Zeitung (FAZ) underscores how wind and sun are delivering nothing of what was originally promised.

Weimann describes how politicians and proponents like boasting that “much has been accomplished so far”, but points out that CO2 emissions have not fallen in close to a decade, despite the whopping 25 billion euros that are poured in through feed-in tariffs each year.

Weimann calls the claim that one third of the country’s electric power is being supplied by green energies misleading, and reminds readers that wind and sun in fact supply only 3.1 percent of Germany’s primary energy needs, which he characterizes as: “Gigantic effort, ridiculously low returns – that is the reality of German climate policy.”
-------------