On Aug. 16, 2018, Thursday near-midnight, a Xiamen Airlines plane skidded at the Ninoy Aquino International Airport (NAIA) and caused the runway closure for some 36 hours. The result was a nightmare for thousands of passengers. Many arriving flights were rerouted to Clark and Mactan-Cebu airports while passengers departing from NAIA were stranded for a day or two or even more as it was not easy to rebook a flight.

Among the issues and questions that came out of the incident are the following:

1. The DoTC-DTI Joint Administrative Order No. 1, s. 2012, “Providing for a Bill of Rights for Air Passengers and Carrier Obligations” — does it apply to stranded passengers in this case?

2. If not, who should shoulder at least the meals of the stranded passengers — the passengers themselves, Xiamen Airlines, MIAA, TIEZA/DoT?

3. This is not the first time that NAIA was closed due to plane accident on the runway. Were there lessons learned?

4. What are the impacts on the Philippine tourism sector?

On #1, seems that the answer is No. The cancellations and flight delays at NAIA were not caused by the other airlines, they even suffered huge losses because of extra hours, fuel and other costs associated with landing in Cebu or Pampanga, and flying out with no passengers as their passengers were trapped at NAIA.

Thus, those airlines may not be obliged to give free meals. Passengers who opted to cancel their delayed trips should get refunds but it takes a long time and there are standard deductions from the original ticket prices.

On #2, still subject to investigation and legal debates but it seems that Xiamen Airlines and/or the Manila International Airport Authority (MIAA), as well as the Tourism Infrastructure and Enterprise Zone Authority (TIEZA), should have covered even the meals of the stranded passengers.

MIAA collects P200 per domestic passenger as airport terminal fee, and P550 per international passenger, meaning the agency should provide certain services to the passengers especially for emergency cases like this.

TIEZA, an attached agency of the Department of Tourism (DoT), collects travel tax of P1,620 per Filipino traveling abroad on economy or business class, and P2,700 for those on first class. TIEZA projects seem “invisible” and non-tangible for Filipino travelers, the government simply collects money from them and give the officials and personnel lots of perks and good salaries.

On #3, the answer seems to be No. This is because each administration brings its own airport officials and bureaucrats, some of whom may have little skills in managing big and strategic agencies like MIAA and NAIA.

On #4, the impact is obviously negative. Foreigners or returning Filipinos (balikbayan) with only few days of stay here have already blown off their vacation with lots of unnecessary stress and expenses.

Philippine tourism arrivals in 2016 were only one-half (½) those in Vietnam and Indonesia and one-fourth (1/4) those in Malaysia. In tourism receipts, the Philippines got only one-third (1/3) that of Malaysia and Singapore and one-eighth (1/8) that of Thailand. 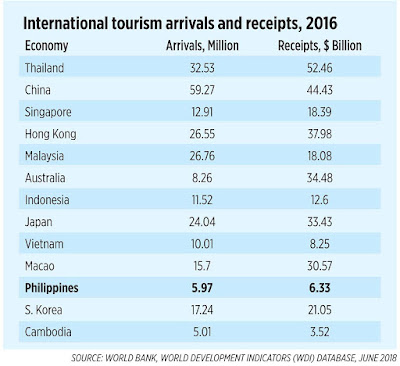 Too bad for the new DoT Secretary, this event is a sure headache in terms of missed targets. This is on top of the ugly Duterte policy of Boracay closure for six months, April 26 to October.

Some implications and policy adjustments for this event would be the following:

One, MIAA and TIEZA which are regular collectors of taxes and fees from passengers should learn to spend for the affected and often hapless passengers.

Two, MIAA should be considered for privatization but the private owners-operators still subject to various regulations by government agencies like the DoTr, CAB, SEC. The purpose is to strengthen professionalism and help depoliticize the management and operation of the airport, since officers are not subject to mandatory replacement every time a new administration comes to power.

Three, NAIA expansion to have a second or third big, wide runway for big planes, should be expedited. Or the creation of second and third international airports as alternative to NAIA — in Sangley Point, Cavite, and/or Bulacan should be expedited as well.


Four, integrated PPP (construction then O&M to be done by the same entity) and not hybrid PPP should be adopted in NAIA expansion and/or creation of alternative airports.
-----------------