On Aug. 13, Armed Forces of the Philippines (AFP) Chief of Staff Gen. Carlito Galvez, Jr. admitted that China’s radio warnings to Philippine aircraft and ships in the South China Sea (SCS) are “a daily occurrence.”

The AFP leadership has actually been mum about this, giving only occasional admission of such China warnings until BBC, one of the international TV networks allowed by US Navy Patrol in one of its recent patrols at the SCS, reported that it was able to pick up China’s aggressive warning to a Philippine military aircraft supposedly flying nearby: “Philippine military the aircraft. I’m warning you again: Leave immediately or you will bear responsibility for all the consequences.”

BBC observed that China’s radio warning to the Philippine aircraft was less courteous compared to the US Navy aircraft which also received a China military warning.

The previous Aquino administration hauled China to the UN-backed Permanent Court of Arbitration (PCA) in The Hague, Netherlands. It was a good move and on July 12, 2016 or less than two weeks into the Duterte administration, PCA rewarded the Philippines with a ruling that China’s 9-dash line has no basis in international law.

President Duterte, however, has never explicitly used and cited that PCA award and instead, tried to appease if not kowtow outrightly with the Beijing communist government.

This policy shift was reassessed during the Stratbase-Albert del Rosario Insitute (ADRi) forum last July 12. VP Leni Robredo, former DFA Secretary del Rosario, SC Associate Justice Antonio Carpio, UP Law Prof. Jay Batongbacal were among the speakers and they highlighted the lack of importance given by the Duterte administration on the value of such arbitral award.

In terms of defense spending, there is some change made by Duterte — there is marked increased in the proposed budget for the Army, Air Force and Navy and decline in the general headquarters (HQ) and other support units. Obligation budget refers to possible extension of service delivery and payment beyond the calendar year while cash budget refers to service delivery and payment within the calendar year with maximum extension of three months (see table 1).

Looking at the regional picture in defense spending, the World Bank’s World Development Indicators (WDI) has some interesting data. 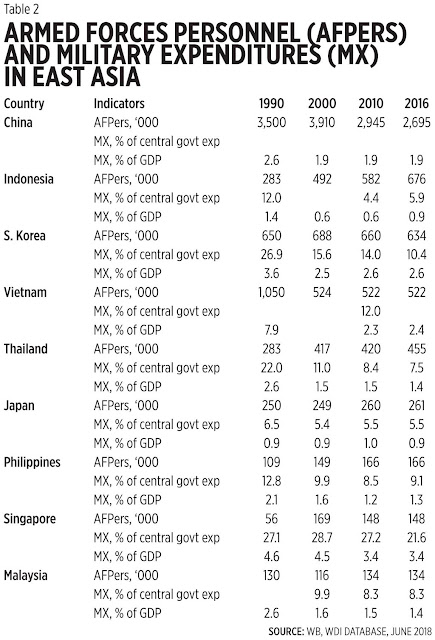 The Philippines’ military personnel and spending look small compared with its neighbors, but considering that it has little external defense capability and the main function of the AFP is internal defense like fighting the NPAs and ragtag separatist and Islamic fundamentalist groups, the spending looks big.

Other Asian countries have used both diplomatic and limited military engagement in facing China bullying in the SCS. Vietnam and Indonesia, for instance, have sank some intrusive Chinese fishing boats that are sometimes backed up by China Coast Guard boats.

The Duterte administration’s kowtow attitude to the China communist government is shameful. It should redeem itself by reasserting the Philippines’ ownership of those stolen islands and territories, have military coordination with the US Navy and have regular joint patrols in the area, among others.