A friend, Vic Saulon of BWorld tweeted this the other day: 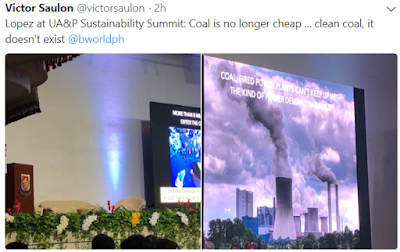 I replied to Vic with 2 tweets:

2. Their gas plants in Batangas are sure money makers, Malampaya gas has priority in the grid. Coal off peak hrs can sell P2/kWh or less, need to keep running even at 0 or neg profit off-peak hours, recover profit daytime. They demonize coal like the Legarda-Leviste solar business.

Malampaya gas is relatively cheap because it goes straight from Malampaya platform as gas to Batangas power plants as gas, no need to convert to liquid, transport via huge ships, store as liquid, then convert again to gas for power plants use.

This huge cost prompts the Lopezes and their allies, environmental NGOs, to lobby that government  through PNOC and DOE should be heavily involved, perhaps use taxpayers' money to build the LNG storage tanks and regassification facilities, then they will use the gas for their gas plants in Batangas. DOE is hesitant to compromise taxpayers money for this so I think this is their game plan, just a raw hypothesis.

The Lopezes and their allies make lots of noise -- in media, press conferences, rallies by some street militants, congressional hearings, etc. -- to demonize coal, perhaps stop all new coal power plants, which can lead to medium-term power shortage. Government might be forced to use taxpayers money to build those LNG facilities, or private funds to build the facilities but government should give them lots of direct and indirect subsidies, various mandates.

The Energy World Group (EWG), an Australian energy multinational, built a 650 MW gas plant in Pagbilao, Quezon. No demand for any govt subsidy, direct or indirect, mandatory energy mix, they just build their own gas storage, regassification facilities. They have the technical, engineering and financial muscles to build the facilities and sell gas power at competitive pricing.


In contrast, the Lopezes have about 3,000 MW of gas plants in Batangas and they seem hesitant to build their own LNG storage and regasiffication facilities unless there are govt subsidies, govt-set energy mix where gas power shd be made mandatory, and off-take security similar to Malampaya gas. Meaning even if their gas power becomes expensive, DUs and consumers should continue buying from them. See https://funwithgovernment.blogspot.com/2017/09/bworld-152-cronyism-in-renewable-energy.html

I hope this hypothesis is wrong. Meanwhile, their continued anti-coal drama is lousy and self-serving.
-------------