Most electricity consumers have that single most important concern and “vested interest” — to have cheap, competitively priced and stable electricity supply. Meaning no brownout even for a minute and yet the price is affordable.

They want to kill the stable and reliable fossil fuel, coal and oil-based power plants especially, and promote the most unreliable, most intermittent, battery needed and more costly energy sources solar and wind. Which will make our electricity prices higher and more unstable.

Cheap and stable electricity will be among the topics to be discussed this coming September 27, 2018, in a by-invite only forum “Energy Outlook: Supplying Rising Demand at Lower Cost” at Joy-Nostalg Hotel, Ortigas, to be sponsored by Stratbase-Albert del Rosario Institute (ADRi).

Let us review the Philippines’ actual electricity production and generation vs. installed power capacity and potential in 2009 (1st year of implementation of RE law of 2008 or RA 9513), 2013 (1st year of the granting of feed in tariff or FIT provision) and 2017. Power generation is expressed in tera-watt hours (1 TWH = 1 million MWH) while power capacity is expressed in gigawatts (1 GW = 1,000 MW). 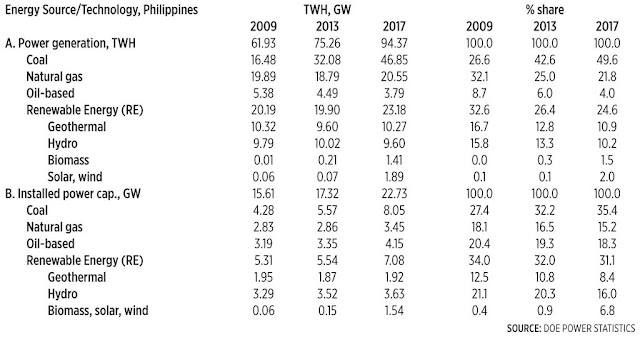 If people are thankful that we have no more blackouts despite rising demand, that generation charges on average are declining through time, coal power is the hero. In 2017 for instance, coal constituted only 35% of installed capacity but provided 50% of total electricity production.

If people are wondering why there is a new item in their monthly electricity bill since 2015, the FIT-Allowance and the rate is rising, blame solar-wind. In 2017, they constitute about 6% of installed capacity yet contribute only 2% in actual electricity generation, and the annual subsidies to them keep rising.

Among renewables, geothermal is the most stable and reliable but its cost is high. Hydro is good but it is weather and season-dependent. High water level and capacity factor during the rainy season when electricity demand is generally low, low water level and low capacity factor during the dry season when electricity demand is generally high.

Solar is unreliable, zero output at night, low output at daytime when cloudy and raining, it has high output only when it is totally cloudless. Wind is another intermittent, no output when the wind does not blow.