BWorld 251, Cure the big trade deficit, bring in the miners

Among the direct results of widening trade deficit is the peso depreciation, averaging only P51/US$ last year, now trading at P54/US$. The expectations are it will depreciate to around P55 in order to further encourage exports while discouraging less essential imports.

Many sectors look at various measures to spur the country’s exports but one thing that escapes their radar is to bring in the miners — have more metal exports, raw ores or semi-processed; have more mining investments and permits.

The Duterte administration though seems to be doing the opposite. The discredited and rejected ex-DENR Secretary Gina Lopez closed many mining firms even for frivolous and unsubstantiated cases and banned open pit mining. Her successor did not significantly reverse those idiotic policies despite recommendations by the Mining Industry Coordinating Council (MICC) to remove the ban on open pit mining, among others.

Below are primary data from the DENR’s Mines and Geosciences Bureau (see Table 1). 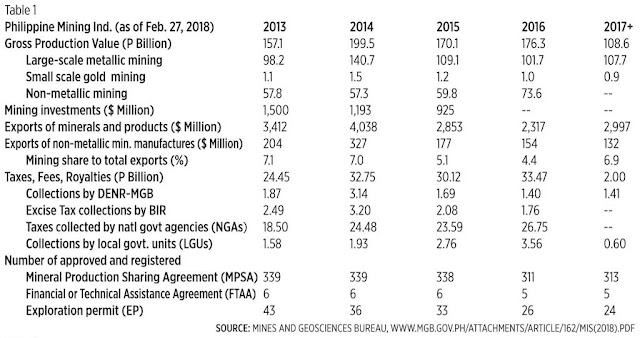 From the above numbers, notice the following:

One, very small contribution by small-scale gold mining despite the huge environmental damage created by thousands of such units. Two, low mining investments when a huge, single biggest foreign direct investment (FDI) in the country, the $5.9-billion Tampakan gold-copper mining project, has been tempered for nearly a decade now. Three, low exports share of metallic and nonmetallic exports when the opportunities are high. Four, significant tax collections by national and local governments. And five, declining number of approved and registered MPSA, FTAA and EP.

The opportunities for high mining exports are opened by recovering prices of important metals where the Philippines has good reserves, particularly gold, copper and nickel (see Table 2).

These and related issues will be covered in the forthcoming Mining Philippines 2018 on Sept. 18-20, 2018 at Sofitel Philippine Plaza.

One pronouncement by President Duterte a few months ago is that he will ban the export of raw mining ores, only semi-processed and manufactured mining products will be exported.

This mandatory, state-dictated mining manufacturing has been done in Indonesia some two decades ago and Indonesia is a much bigger mining player than the Philippines. The result was rather catastrophic — many companies, local and foreign, that went there later became bankrupt. The capex, opex and marketing chains were larger than expected and prices of manufactured metals were highly fluctuating.

Government is a lousy business entity and, hence, cannot be trusted to render non-lousy business regulations. It should stick to enforcing its environmental rules to all players, big and small miners, and not demonize the big ones.
---------------