A number of my friends shared the article by Men Sta. Ana of AER last week, https://www.bworldonline.com/reason-enlightenment-and-inflation/. He wrote there,

"If not TRAIN, what are the principal factors driving inflation? Global factors like the sharp increase in world crude oil prices and the hike in US interest rates (contributing to the peso depreciation) account for a significant part of the inflation. Typhoons or weather disturbances have resulted in higher prices of vegetables."

I commented that such reasoning is OA, palusot pero hindi lusot.

I have been asking this question over and over and zero reply from Dutertenomics and its supporters -- If this is true, then many if not ALL other countries in Asia, elsewhere should have experienced similar level of inflation hikes as the PH, right? They did NOT, the reverse happened for many neighbors, as world oil prices rise, as US int rates rise, their inflation declines.
http://www.atimes.com/article/the-fast-rising-price-of-dutertenomics/

But oil tax hikes by legislation are permanent, forever, unless repealed by another law. That is what many people react to. The ordinary barber or vendor – oil cost for his motorcycle, LPG for house cooking, veggies, chicken etc from provinces brought by trucks, his monthly electricity bill, etc – ALL have risen by significant amount because of TRAIN tax tax tax, as early as January-Feb. So they have to raise their barber charge, their palengke price mark up. And current inflation does not even include fare hikes by buses, taxi, UV express, jeepneys beyond initial P1 hike.

Nonoy Oplas, you might want to take a look at this: https://en.wikipedia.org/wiki/List_of_countries_by_net_oil_exports

We're the only developing country that is among the top 10 net importers [bottom of the list], except India. The short answer is that because we are more dependent on oil than other Asian countries, the oil price increases from outside hit us the hardest and in a different way.

Now you can make the case that tax hikes aggravated the problem, but you have to distinguish between which factors produce more of the increase. It isn't fair to blame tax hikes when it produces little of the effect compared to increases in world oil price.

I checked the link. KR, JP, CN, IN, PH among the top 10 net importers of oil, 2014 data. Sige pagbigyan ang old data. Now see this, one of the slides I presented at BMAP (Bank Marketing Association of the Philippines) last Friday. Despite the continued rise in world oil prices this year, 2018 ytd vs 2017 inflation, KR experienced a decline, 1.9% to 1.4%; JP and CN experienced an increase but only by 0.5%. PH increase is far out, 2.9% to 4.8% or 1.9 % pts increase. ALL of these countries did not have tax-tax-tax in oil and other products except the PH. 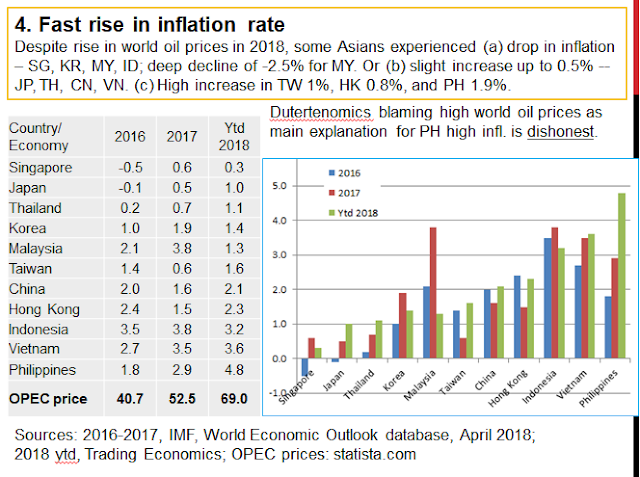 I can see that Dutertenomics and its supporters, rah-rah boys have little or zero humility about the real impact of their beloved TRAIN on PH inflation. Blame everything -- high world oil prices, peso depreciation, US int. rate hikes, etc. except TRAIN.

So since TRAIN is so cool and innocent, I can see that Dutertenomics and its rah-rah boys and girls will be clapping and jumping with joy when oil, lpg, coal tax hikes part 2 will occur this coming January or 3 months from now. This will give more money to their beloved govt, leave less money from their demonized rich who "consume 50% of total oil products" in the PH. Any additional inflationary pressure can be blamed on everything else except TRAIN. magaling.


Many people still insist that it is not fair to place the blame the high inflation primarily on TRAIN. Duhhh? It was still a TRAIN bill and there were many resistance in raising the tax on oil products as it will affect everything -- farm tractors, irrig pumps, threshers, harvesters, fishing boats, motorcycles, trucking of food products and other goods, transpo of people (bus, jeep, taxi, UV express, planes, ships, etc.) -- but Dutertenomics and its apologists like AER were so adamant that it won't affect the poor.

Another table I showed at BMAP forum. PH Inflation jumped quickly in Jan-Feb 2018 upon TRAIN implementation while many neighbors experienced decline or flat infl. People know that govt-legislated oil tax hikes are permanent unlike high world oil prices that can go down after sometime, like the $25/barrel we saw some 2-3 years ago. 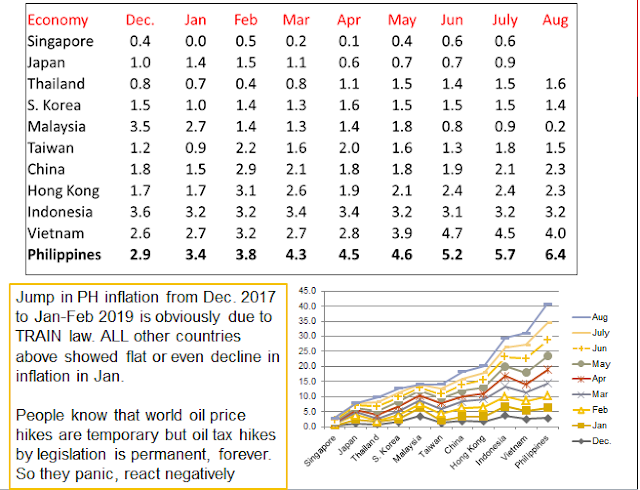 If people will keep denying the major impact of TRAIN on inflation, then those same people will clap and jump with joy when TRAIN's oil, lpg, coal tax hikes part 2 will be implemented this coming Jan. This will give more money to their beloved government and its welfarism while this will affect mainly the rich and not the poor. Lousy.

Posted by Bienvenido Oplas Jr at 2:00 AM