The Kavanaugh confirmation hearing, or hell by the left

I am reposting some fb comments by some American friends that I respect, September 28-30, 2018.


I'm watching the Kavanaugh hearing and several things come readily to mind: 1) Each of the shameless anti-Kavanaugh senators isn't half the human being that the Judge is; 2) Trying to make a Supreme Court nomination issue of a blurb in a 36-year-old high school yearbook is something that only a dirtbag would do; 3) The Judge, in spite of a spirited self-defense, is actually going easy on this bunch of Big Government thugs. When Durbin pressed him on calling now for an FBI investigation, the Judge should have said, "You are asking me to aid and abet my own character assassination for no other purpose than to delay a vote for political advantage. You're at the center of this disgusting conspiracy and I refuse to legitimize it by being your pawn. Get lost."

Senator Feinstein says the reason she sat for weeks on the allegation against Kavanaugh was to protect the accuser's desire to be anonymous and that it wasn't for political reasons. This raises some immediate questions in my mind: 1) So if the accuser just wanted nothing more but to tell a single Democratic legislator of her allegation and that would be the end of it, how much sense does that make and what possible purpose did she think that would serve? 2) If Feinstein really wanted to get to the bottom of it all and still keep the accuser's identity private, why didn't she at least ask Kavanaugh weeks ago about sexual crime charges without identifying the accuser? She didn't. Bottom line: I think Feinstein is a liar who, like so many of her "progressive" colleagues, will do just about anything for power. Power corrupts, as Lord Acton said, and as I like to add, power attracts the already-corrupt.

shame on the majority of journalists today (including Fox News Channel) who were ready to "convict" Kavanaugh based only upon the performance of his accuser. You have to hear both sides before rendering judgement. Many men have spent decades in prison before their accuser recanted. If you automatically believe someone just because she's a female, you can unfriend me now. I don't know what the truth is in this matter, but I believe in the right to answer your accuser. 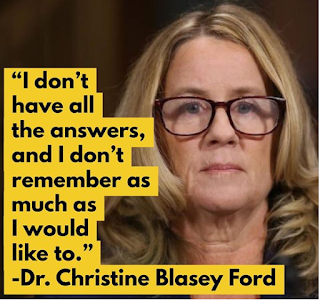 every woman I've heard from who has been the victim of a sexual attack says you don't forget the circumstances. If she was too drunk to remember the details, how can she be 100% sure it was him? Inconsistencies.

"Practical advice on how to judge sexual assault claims ... I note that Kavanaugh's accusers raise all ten red flags."
http://thefederalist.com/2018/09/25/10-red-flags-sexual-assault-claims-employment-lawyer/#.W6p5yUqqQVV.facebook

"If you get angry when we accuse you on nationwide TV of being a gang-rapist, you lack judicial temperament."
This is the 2018 version of "We'll throw you in the lake, and if you don't sink, you're a witch".

From Scott Adams, one of the more brilliant observers of the modern scene:

“‏Dems destroyed Kavanaugh's life, and his family's life, for naked politics . . . then they raised doubts about his temperament because he seemed upset about it. Wouldn't we be more concerned about his humanity if he took it in stride?”

Can't say fairer than that. I keep asking people, would you be calm and collected if someone spread an accusation all around the world that you are a gang-rapist?

It appears that Thomas Sowell, the noted black scholar, could see into the future. At any rate, he sure foretold the Kavanaugh hearing ...

"Emotions neither prove nor disprove facts. There was a time when any rational adult understood this. But years of dumbed-down education and emphasis on how people 'feel' have left too many people unable to see through this media gimmick."
Posted by Bienvenido Oplas Jr at 10:20 PM