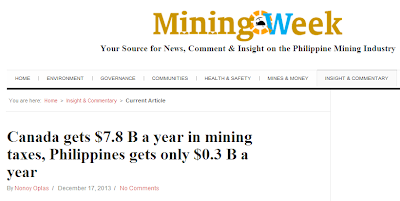 “The Mining Association of Canada released its annual report on December 3 about mining industry payments to Canadian governments, prepared by ENTRANS Policy Research Group. Now in its tenth year of publication, the report found mining payments to federal and provincial government coffers total an estimated $71 billion from 2003 to 2012 in aggregate mining taxes and royalties, corporate income taxes and personal income taxes paid by mining sector employees….

“According to Natural Resources Canada, the Canadian mining industry employed more than 418,000 workers across the country in 2012—representing one in every 41 Canadian jobs. Moreover, mining workers earn the highest wages and salaries of all industrial sectors in Canada. The average weekly pay for a mining worker in 2012 was $1,599, which surpassed the earnings of workers in forestry, manufacturing, finance and construction.”

The Philippines, which is supposed to be a mining powerhouse with an estimated mineral potential value of around US$ 1 trillion, is not able to optimize both its mining corporate revenues and taxes. From 2008 to 2011, the Philippine government was able to collect only around $310 million a year in corporate taxes, fees and royalties, from large-scale mining companies. 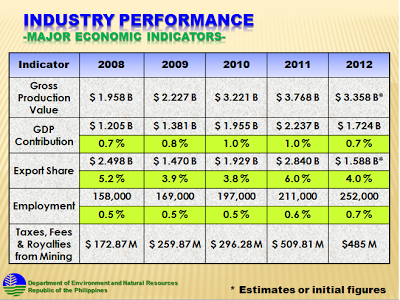 The above Philippine data of mining taxes, fees and royalties is understated because (a) it covers only large scale mining firms, and excludes small scale mining that produce huge amount of gold via the black market, and (b) personal income taxes, social security contributions by workers and officials of large mining firms are also not included. By how much is the projected understatement? Maybe +/- $150 million per year, a rough estimate.

The way business uncertainty and financial instability is inserted in the country’s mining sector, both the economy and the government are the net losers here, as shown by preliminary 2012 and 2013 data from the MGB-DENR. 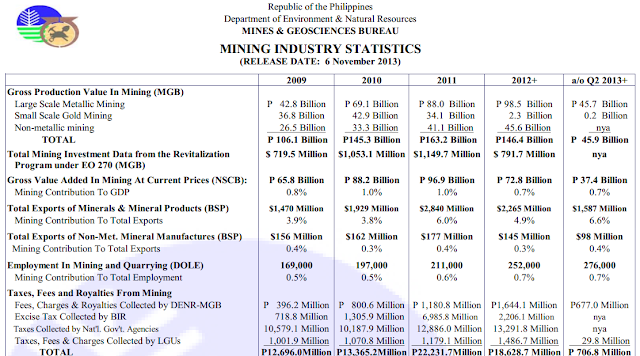 Mining gross value production in 2012 was comparable to that in 2010 but lower than in 2011. Production this year, if the first half figures are the basis, should be less than P100 billion, which is even lower than 2009 and 2010 production.

The national government itself should be alarmed of this trend. If certain sectors are against large and corporate mining due to environmental, cultural, political or religious reasons, the national government should help explain to them the threat to people’s livelihood and fiscal shrinkage of collections from the sector. Very often, the same group of people who express strong opposition to large scale mining are also lobbying for more government welfare and subsidy programs, which are sourced from taxes and regulatory fees collection.

The $0.3 billion Philippine government collections from the large mining firms should see shrinkage in the coming years if anti-large mining and anti-capitalism sentiments are not checked and neutralized.
-------------