Nepal and its Maoist Government 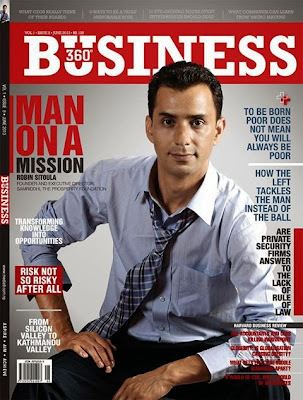 * A guest post from a friend in Kathmandu. Robin is a co-founder of Samriddhi, The Prosperity Foundation (http://samriddhi.org/), a free market think tank in Nepal. He was featured in the June 2013 issue of Business 360, Nepal's free market leaning monthly business magazine where I also write a column under "Free Market".
---------

Nepal has been a part of an elongated political transition for nearly half a decade now. Following the Nepalese Civil War (1996-2006) monarchy was abolished and the Unified Communist Party of Nepal (Maoists) emerged as a major mainstream political party from the first ever Constituent Assembly (CA) election held in 2008. After the first CA failed to deliver the constitution in May 2012 and got dissolved, efforts were made to create a multiparty government. But the political negotiations where the Maoist party exercised much influence (Dr. Baburam Bhattarai from UCPN (Maoists) still being the Prime Minister of the caretaker government) led to the formation of a technocratic electoral government in March 2013. In the meantime, a hardline faction split from UCPN (Maoists) in June 2012. The split faction led by Mohan Vaidya later opposed the second CA elections held in November 2013 and even used violent means, such as bombing, to deter the political parties and citizens from participating in the elections.

Amidst ambiguity and confusion regarding the electoral technocratic government, led by Chief Justice Mr. Khil Raj Regmi, the second CA election was initially announced to be held in November 2012. Despite speculations to the contrary, the elections were held in a largely free and fair manner on November 19, 2013. With a voter turnout of over 75% (in the face of violent obstructions and national strike by the hardline Maoist faction) and deemed free and fair by almost all national and international observers, the results of the election has left a huge majority of people and analysts shocked, especially the Maoist party itself. With the results of both first-past-the-post voting and proportional representation, it could be said that Nepal’s politics has moved marginally towards right where Nepali Congress, the country’s oldest political party and considered to be fairly centrists have won around 34 percent of CA seats. Similarly, The Communist Party of Nepal (Unified Marxist-Leninist) has come in second with around 30 percent seats. Despite their party’s name, the Marxist-Leninists are considered only slightly left of the center in Nepal. The Unified Communist Party of Nepal (Maoist), the dominant Communist party, secured only around 14 percent of the seats, which is a small fraction of its previous share of 37% in the 2008 CA election. The conservative party with monarchy and Hindu nation still on their agenda won around 4 percent of the seats whereas other parties considered left of the center constitute around 11 percent of the total CA seats.
The Unified Communist Party of Nepal –Maoist (UCPN-M), which was the largest party in the last CA and other Madhesee parties-- with predominance in the southern belt in the2008 election-- who lost several seats do not seem to be happy with the results. They have been claiming that the elections were rigged and it should be ‘re-evaluated’. UCPN- Maoist has gone to the extent of announcing that the party will not participate in the CA process if the results are not revaluated. This is seen by many as yet another tactic to divert the agenda from the Maoist Sumpremo Prachanda’s failure as a party leader and to ensure their larger participation in the CA despite the hard hit loss.

Looking at the current mandate of the largest (but still not enough to 51% majority) party in the CA, Nepali Congress should lead the government in coalition with other parties and also lead the process of constitution formulation and promulgation. The CA needs to finalize the constitution within two years and run the government of the next four years. Nepali Congress has had the reputation of being a pro economic liberalization party. However, power conflict and personality clashes and rifts within the party are very strong, as seen in the past. This kind of political bickering can already be seen within Nepali Congress and CPN-UML. Yet people of Nepal are anticipating a new government will be sworn in within a month’s time. Nepali Congress, as a mandated leader of this process has been making public statements that it would work towards creating a bi-partisan consensus government in this leadership. But the possibility of a bi-partisan consensus government seems bleak. In a case like this, the best likeliness is that the largest two parties -Nepali Congress and CPN-UML- will form a joint government. If this scenario works out, many expect a fairly stable political situation and possibility of a constitution actually being promulgated within stipulated time period. However, the strategic steps of the UCPN-Maoists will be critical to the overall process. As the political discourse has been shaping every day, it is yet premature to predict what the UCPN (Maoists) will settle with. Will they accept the mandate of the elections and adhere to the accepted democratic norms, or will they come up with new non-democratic stunt to win political strength? That is yet to be seen.

(Note: The percentage of parties’ representation in the CA (mentioned here) is calculated without considering the 26 seats that will be nominated by the new cabinet of Ministers and will be added to the current 575 CA seats to form the full assembly of 601 members).
------------