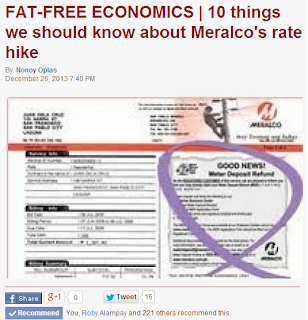 1. The P4.15 per kilowatt-hour (kwh) electricity rate increase is short-term. It should have applied for only a month (if the increase had not been staggered) while the Malampaya natural gas platform was under maintenance. After that, the original lower rates, other things being equal, should return. Thus, contrary to public opinion, the rate hike is not long term.

2. The rate increase stems mainly from the generation charge, partly from the transmission charge, but nothing from the distribution charge. As distributor, Meralco is on the last stage of the electricity supply chain and is the collecting agent for all players (including the taxes that the government levies), and so naturally receives the brunt of public anger.

Table 1. Schedule of Rates for December 2013

Compare the December rates above with the November rates below. Supply charge remained at P0.6043/kwh or P19.88/customer/month, while metering charge also stayed at P0.4066/kwh or P5.00/customer/month.

Table 2. Schedule of Rates for November 2013

The generation charge from November to December this year increased by P2.00/kwh, transmission charge by P0.0372, and system loss charge by P0.1950. As for the distribution charge, no increase.
Last October, the per kwh charges were as follows: generation charge, P4.6832; transmission charge, P0.8652; and system loss charge, P0.5050 -- all lower than the November rates. But the September rates were slightly higher than those of October, as part of the normal fluctuation in prices per month.

3. Lack or absence of competition is bad. Electricity distribution in the Philippines is always a monopoly, given to a specific entity through a congressional franchise. The Meralco monopoly is an example. In addition, there is a Constitutional restriction, as foreign equity is not allowed. 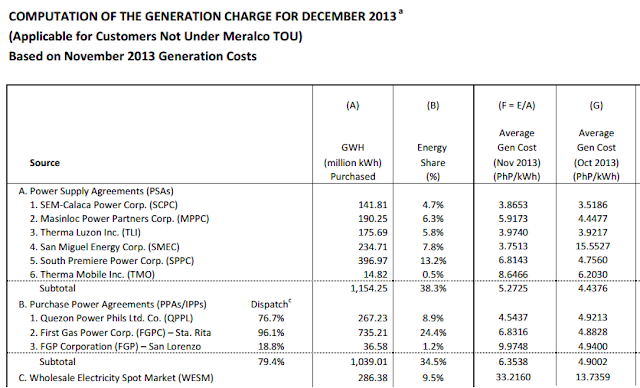 
The big power plants from which Meralco gets its electricity are Sta. Rita and San Lorenzo of Lopez-owned First Gas, and the Ilijan plant of SPPC. The three run on natural gas. The other big source of electricity comprises coal power plants. Comparing the per kwh cost of natural gas and coal on the one hand, and those from WESM on the other, the price differential is big, up to 10x costlier in November. 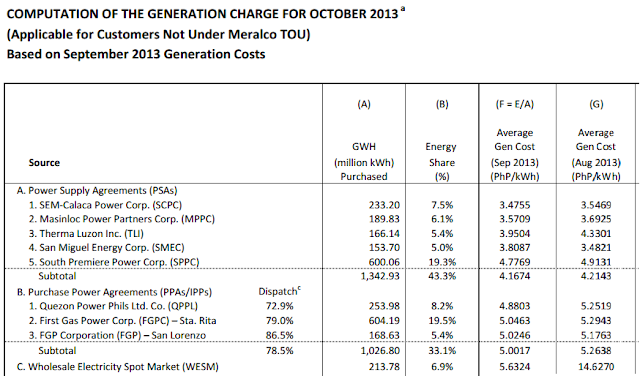 The same story can be seen in Table 3: electricity rates from WESM are a lot higher. The power plants that are on maintenance shutdown are the following:

The first three plants run on natural gas from Malampaya for a combined 2,700 MW; the next three  are coal-fired plants for a total of 1,930 MW. Overall, 4,630 MW of fossil fuel from six power plants are giving us cheaper and stable electricity. When they are down, whether on maintenance or by accident, we suffer from high electricity bills. Of the P4.15/kwh rate increase, P3.44 goes to additional generation charge alone as Meralco is forced to get power through WESM, where other power suppliers are using diesel, geothermal, hydro and other renewables.

5. The maintenance shutdown of Malampaya -- done every two years on average -- has been scheduled and announced around middle of this year. There was no “surprise rate hike” since this was announced several months ago. If natural gas is cheap, any shift to other power source will immediately result in a price hike. But such hike should be temporary, say for only a month, the usual length of maintenance shutdown for big facilities like Malampaya.

6. Cheap and stable energy from fossil fuels like natural gas and coal is desired by the public, as evidenced by their anger at higher energy prices from other power plants not running on natural gas and coal. The public however demonizes fossil fuel and emotionally endorses renewables like solar and wind, without realizing that these are expensive and unstable power sources.

How cheap is natural gas compared to other power sources? In the US, here are the estimated levelized costs of new generation sources, plants entering service in 2018, in $ per megawatt-hour. 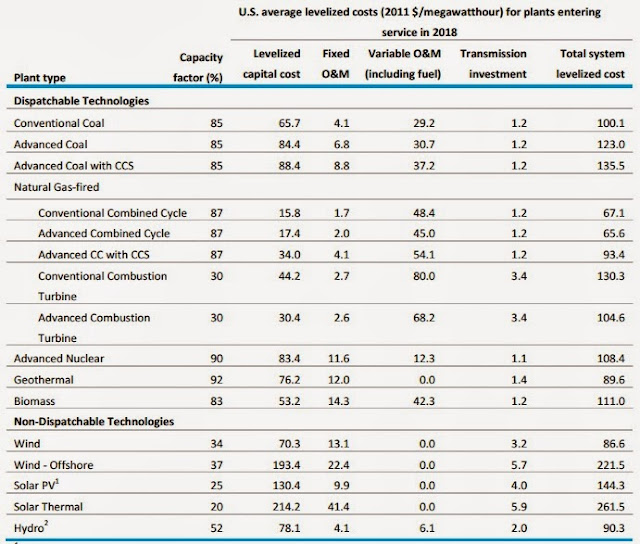 Ranking from cheapest to most expensive, in $ per megawatt-hour

The public is not angry at this. They have been hoodwinked by certain sectors like Greenpeace, World Wildlife Fund (WWF), the UN and Al Gore to think that we need more expensive and unstable electricity sources to “save the planet.”

8. The Electric Power Industry Reform Act of 2001 (EPIRA) or RA 9136 has removed state-owned National Power Corp's (Napocor) monopoly over power generation, allowing private players to compete. Many people are angry at this law because it allowed three big players -- Aboitiz, San Miguel and the Lopez Group --  to dominate or control 65 percent of installed generation capacity in Luzon.

But 65 percent control by three players is better than almost 100 percent control by just one corporation back then (i.e., Napocor). A friend of mine who works at SN Power (Norway) said Napocor power generation from Magat, Pantabangan and others dams was as low as 30 percent of their installed capacity. When SN Power-Aboitiz came and assumed the hydro plant, it raised the utilization rate up to 100 percent. This is one more proof that private players in a competitive environment do better than a government monopoly like Napocor. Thanks to the EPIRA.

9. We should have more natural gas and coal power plants as global price of coal is declining. The US, many European and emerging markets are slowly shifting to shale gas, another fossil fuel that is cheap and stable, and hence will fuel more industrialization in the developed world. 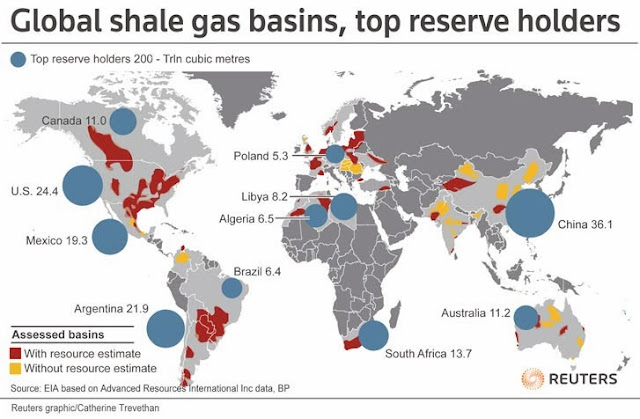 Shale gas will bail out those economies from the wastefulness and profligacy of their governments.
10. Overall, the subject has been sensationalized and politicized by certain sectors that dislike market competition, electricity privatization, and continued Meralco monopolization.

But one good thing that came out of the whole controversy is that people -- no matter if they're tree-huggers or harbor "save the planet" sentiments -- are actually unwilling to pay more for electricity whenever possible. If people love wind and solar, then they should just put up those solar panels on their rooftops, cool. They walk the talk, no issue. But it's a different thing when they say they want "clean, non-polluting, affordable solar/wind" by forcing the rest of us to subsidize their monthly electricity bills.
See also:
Fat Free Econ 47: Pork Scam vs. Public Debt Scam, September 07, 2013
Fat Free Econ 48: Jobs, Taxes and the World Bank, September 15, 2013 Fat Free Econ 49: Growth Amid Storms, December 03, 2013