An official of the University of the Philippines (UP) Manila, where the College of Medicine and the Philippine General Hospital (PGH) is based, Dr. Tony Leachon who is also a friend, posted in his facebook wall about the need to raise the budget of the PGH. 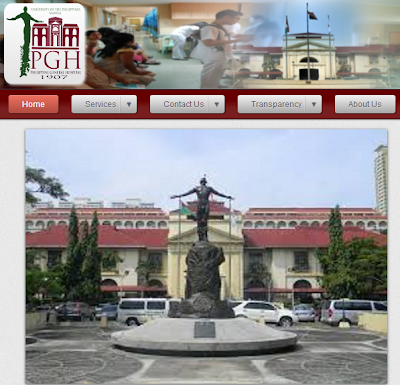 Those in UP Manila estimate that PGH needs P4 billion a year to run smoothly, a “Harvard like institution” and at least P1 billion is for CO alone to improve or replace many of its dilapidated facilities.

There are two moves being proposed. One is to double PGH annual budget and two, PGH should have a separate budget from UPS budget.

I suggested that there should be similar effort to pressure the Manila City government to contribute to PGH regular funding. I think it is safe to assume that about one-fifth of PGH’s patients, confined and outpatient, are residents of Manila City.

The City of Manila government does not feel it has any responsibility over PGH funding as it also finances about six city-owned hospitals, like Ospital ng Maynila , Ospital ng Sampaloc, Tondo General Hospital, Sta. Ana Hospital.

This is not correct. The city government has "no responsibility" but "has privilege" or "has right" to use PGH for its residents. Right without responsibility is a good formula for free riding and citizen irresponsibility.

A better option for the city government would be to sell or privatize one or two of its six (?) city hospitals, get the money and contribute to PGH regular funding.

This practice by national government agencies to subsidize Manila-based facilities and give Manila-based residents various subsidized or free services contribute to more congestion of Metro Manila. People in the Visayas, Mindanao, Bicol or Ilocos regions have no PGH but they contribute to the annual budget of PGH. They do not have MRT or LRT but they contribute to the annual subsidy of LRT and MRT. So many people from the provinces jump to Manila, partly to enjoy these freebies that are not available in their provinces and cities.

If the Manila City government will not contribute to PGH funding, PGH should NOT get budget increase from Congress. Instead, Congress-appropriated budgetary hike for healthcare should go to existing big DOH hospitals in Mindanao, Cebu or Iloilo, Bicol, Ilocos, Cagayan regions. Make these region-based hospitals become more modern, in infrastructure and health professionals’ training and specialized services. This way, the old practice of national agencies (UP, DOH) favoring Manila-based residents and contribute to further Manila congestion will be corrected.

Someone suggested that my above proposal does not and should not apply because of health insurance portability principle, that national taxes should apply to everyone. If we are to follow this logic, then it should be fine to have 3 or 5 more PGH in Manila City alone, and if funds for healthcare in other cities and provinces are not sufficient, public hospitals there can be closed down, anyway the people can go to the many PGH system in the city of Manila alone.

Any increase in public health should go to one regional or big island hospital -- in the Visayas, Mindanao, Bicol, Ilocos, or Cagayan region. Any significant increase in PGH funding should come from the Manila City government and from private donation, what Atty. JB Baylon is doing to raise funds for the PGH Medical Foundation through the "I am a Person Giving Hope (PGH)" campaign. Many showbiz, basketball stars and corporate individuals are supporting this cool initiative.

There should be more civil society and corporate involvement in increasing PGH funding, it should not rely on more national funding. Once again, the Manila City government must contribute to PGH annual funding as the hospital is serving many of its residents and voters.

On the contrary, it is big and rich cities and provinces that subsidize the poorer areas of the Philippines through the internal revenue allotment (IRA). I believe that it's the same for most other countries, even in a federal system. Some areas are just richer mainly because of geography (nothing to do with race) and enhanced by sound economic policies, efficient governance, and(!) population.

The link below is a good read:

Simply put, for the National Government not to subsidize the needs Manila and environs would be a disaster for the rest of the country.

You are right, you didn't write that.

I also agree to just separate PGH budget from UP. Other state universities salivate about UP's budget but they don't realize that a good amount actually go the PGH.

But to single out the City of Manila just because the city hosts the PGH is a bit unfair. I'm sure the rest of the Metro (cities with far lower spending on its own hospital(s) than Manila) and nearby provinces would have its constituents use PGH facilities.

Maybe the PGH can give us data on where their patients reside? Then ask *some* funding from their respective mayors (maybe this will force their legislators to push for higher PGH funding).

Anyway, the National Government also operates many other hospitals around the country:
http://www.doh.gov.ph/doh-hospitals-directory

I feel that there really is no need ask Manila to partly fund PGH but not the other cities hosting good DOH hospitals.

Manila is more accessible to the rest of the country than say Cebu or Davao (considering air, sea and land links). So putting the most advanced hospital there is logical.

But we have some good news. The Philippine Heart Center is now trying to have "regional heart centers". Other specialized hospitals based in Manila should follow suit.

I think as the Philippines grow richer, there is no need to centralize everything in Manila. The previous governments were just forced to prevent meager funds from being spread too thinly - thus, our present situation.