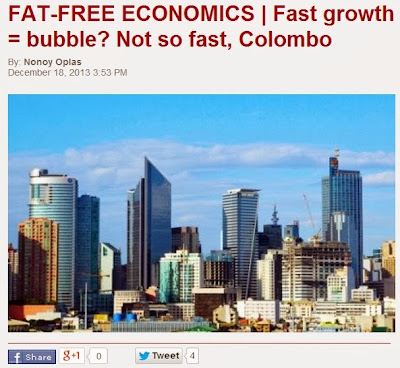 MANILA - A few weeks ago, an article from forbes.com written by contributor Jesse Colombo, “Here’s why the Philippines’ economic miracle is really a bubble in disguise,” went viral in the social media. One may not agree with the analysis and conclusion but many data presented were useful.

The Philippines’ recent strong economic performance -- like the 7.4 percent GDP growth in the first three quarters of 2013 -- is it a miracle or a bubble in disguise, as Mr. Colombo and a few others would put it?

An “economic bubble” simply means the value of something is a lot higher than what it should normally be, thus its price is not anchored on its real earning capacity – what we call macro fundamentals.
People should recognize that capitalism, innovation and competition is about bubbles inflating and popping in an endless cycle. For some companies, it is the cycle of expansion and contraction, with some going through a phase of bankruptcy, temporary or permanent. Capitalism without huge rewards is like religion without heaven, and capitalism without bankruptcy is like religion without sin. Innovation and competition always result in some bubbles.

To disprove Colombo’s conclusion -- that the country’s fast economic growth was a “miracle” or a “bubble in disguise” -- three data sets are outlined below, using the very same charts he cited in his article. In a sense, this is analyzing the same set of data from a different perspective.

Both short term and 10-year bond rates are coming down. This means that there is more confidence in the long-term growth potential of the economy, even with bubbles and instabilities factored in.

The above charts show that the supply of money -- whether coming from within or from abroad -- keeps rising. In economic jargon, the supply curve is shifting to the right, resulting in lower interest rates. Graphically, this can be portrayed as follows: 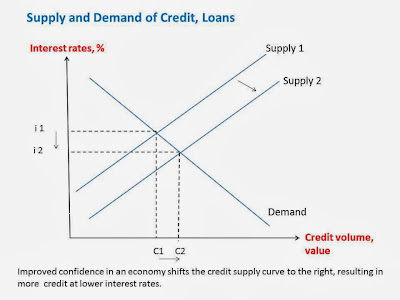 Data B: Consumer spending is rising.

Someone’s consumption is somebody else’s production. Supply and demand, production and consumption, they regularly meet each other at various equilibrium prices or mutually-agreed price points per commodity.

We have our big and young population to thank for this. More people means more entrepreneurs and workers, more producers and consumers. Many investment analysts and banks abroad look at it more positively than negatively; more as assets than liabilities.

Car registrations as proxy for car sales also showed a rising trend, soaring 50 percent since 2008. This means more people are leaving or selling their motorcycles or jeeps and buying cars. Cars and vans are  productivity-enhancing investments that transport people, students, goods and cargo.

Mr. Colombo and other people look at this negatively as it is a “credit-driven growth and bubble.” Not true. A better perspective is that lower personal savings is a result of low incentives to save money in banks due to low interest rates. Reacting to Mr. Colombo, newspaper columnist John Mangun wrote in another article: “Why would you save to earn 1-percent interest when inflation is 3 percent? The sensible thing to do is to buy a house or open a business, which is exactly what Filipinos have been doing in the last five years.”

Or instead of putting extra income in the banks, people buy a car, or send the kids to more expensive schools, or take more trips abroad for vacation. These are purchases of goods and services produced by other people and sectors of the economy.

Recall the basic Economics equation, Y or GDP = C + I + G + (X-M), where C is Consumption by households; I is investment in the form of capital outlay, durable equipment, plus stock market investments; G is government consumption; and (X-M) is net of exports minus imports.

Consistent with “someone’s consumption is somebody else’s production”, both local and foreign investors are putting their money here to capitalize on long-term continued growth and expansion of the economy, while other countries such as those in Europe suffer from low growth, if not recession. 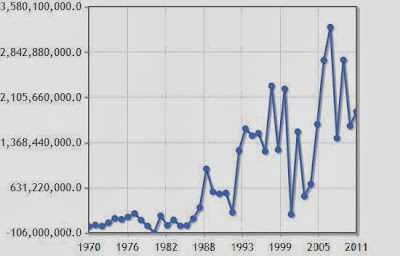 Foreign direct investments (FDIs) are rising. The numbers are net inflows, meaning what has remained of the inflows after outflows are removed. The amounts may be a pittance compared to what other emerging Asian markets like Indonesia and Thailand get, mainly due to a protectionist Constitution that limits if not prohibits foreign equity investments in many sectors of the economy. Still, the trend of rising FDIs is there for the past three decades or more.

Chart 8. Stock market has more than tripled since 2009.

Property bubbles can happen anywhere, anytime -- whether the macroeconomic fundamentals are weak or strong. When a property bubble pops or bursts, it is a correction mechanism but the price does not go down to zero. For instance, a condo unit priced at $100,000 and later mellows to $60,000 or less is bubble popped and the real price is corrected. A bubble burst does not mean that the condo price goes down to zero.

An economy without bubbles is a communist like North Korea. Property bubble there is impossible as everything is regulated and controlled by the state. Thus, economic bubbles are 100 percent part of society where people have the economic freedom to pursue commerce and entrepreneurship. People should just be wary when some guys promise them things that seem too good to be true, like Ponzi schemes. These are huge bubbles with bubbly returns for early investors but little or zero for late investors.

The one thing that shows real and long-term bubble performance is the Philippine government. For many years, government has been living beyond its means, spending more than domestic revenues can sustain and resorting to endless borrowing to finance the annual fiscal deficit. Wasteful public spending is clearly captured by persistent budget deficit even -- if there are no clear national emergencies -- and by rising total public debt stock.

So the Philippine economy is not that weak as portrayed by Mr. Colombo and other skeptics of the Filipinos’ capacity for hard work. A bubble does exist in some sectors or sub-sectors, and they will ultimately pop or burst, say a few years from now. But it is a correction mechanism: prices go down, stabilize, then climbs back again. And life goes on, waiting for another round or opportunity at high-risk, high-return projects.

What really makes an economy weak is the lack of rule of law. Laws are arbitrarily changed and applied by government (if at all). Strict requirements with penalties and high taxes for some, but lax requirements and tax avoidance by others. Many institutional investors, foreign and local, do not like this, so they do not invest or come in, and that reduces the productive capacity of the economy.