The Pope and Capitalism

A friend from UPSE alumni association, Mike A. wrote me in our SEAA yahoogroups and asked my views on   Pope  Francis, as  he  has  made a critique  on the Free  Market  ideology, and the Social Darwinian "survival of  the fittest" philosophy. Below is portion of a news report from theblaze.com.

Pope Francis Made Some Pretty Big Comments on the Global Economy: Here’s What You Need to Know
Nov. 26, 2013 1:26pm  By  Becket Adams

Pope Francis rebuked the culture of profit at any cost as he issued a 224-page mission statement for his papacy Tuesday, saying that mankind is called first to care for his neighbor and the poor….

The document also denounced the survival of the fittest theory of economics “where the powerful feed upon the powerless” and the poorest in society are excluded….

Unsurprisingly, as is the norm for this particular pontiff, some media outlets chose to present Francis’ words as an attack on yet another traditional pillar of “conservative” ideology: the free market. 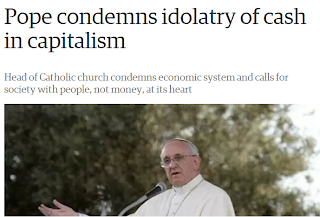 Well, a religious argument is based on faith, on belief and morality not so much on hard facts. No one asks for graphs, charts, tables and regression analysis to believe that a God exists, people just believe and have faith in a God.

To disappoint some people’s obsession with central planning and critique of free market, now invoking the Pope to strengthen their weak and lousy belief, here are some quickies. 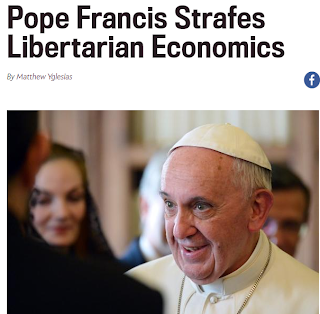 1. The free market system, the capitalist economic system, gave us yahoo, yahoogroups, google, facebook, youtube, twitter, linkedin, Samsung, Apple, iPad, HTC, Starbucks, McDo, Mang Inasal, Aling Karing Carinderia, Toyota, GM, BMW, Vespa, Suzuki, Shimano bikes, etc. They are all useful. If people do not find any of them as useful, then they don't use or buy it. There are still people in fact who don't have facebook until now, it should be fine, no one coerces them to get one. In addition, no one was also coerced via taxation to finance the start up of those private enterprises.

2. The non-free market, the non-voluntary exchange, the force and coercion sytem, gave us what? Thousands of bureaucracies, local-national-multilateral, and tens or hundreds of thousands of central planners, very often their plans contradict or duplicate the plans of other bright boys and bureaucracies.

There is also "state capitalism" where an institution of coercion tries to enter the world of voluntary exchange. But such state capitalism is possible only via rule of men, not rule of law. Certain requirements and polices on taxation, business registration and other regulations that normally apply to private enterprises do not apply to government- or state-owned enterprises (SOEs).


3. "Survival of the fittest" economic theory is a wrong term. The appropriate term is "expansion of the efficient" and "non-expansion of the inefficient", or Yes, “bankruptcy of the inefficient.” Mr. A puts up a bakery shop in a corner lot, it was doing well initially. Then Mr. B and Mr. C also put up a competing more glitzy, more fanciful bakery shops nearby and draw in many customers of A. Does this mean the death, non-survival of bakeshop A?

Maybe yes, but maybe No. People are rational, they innovate and adjust as much as possible. Those who do not adjust and innovate are likely to go bankrupt. So bakery A can focus on cheaper (and smaller) pandesal at P1 per piece while B and C sell fancy pandesal at P3 or more a piece. They serve certain markets, certain consumers, over the same locality, and they can all survive, no one dies. Instead of A prospering to become a big bakery shop, it just retained its small size in that area, and can plan an expansion elsewhere, in another village or municipality where it can innovate in its products, pricing and marketing.

Market segmentation, product and pricing differentiation. These are the key for enterprise innovation, market competition and economic freedom. Even people who took Economics for their college degree forget their Econ 102 or Micro Economics course. They may consider reading old books on microecon, or have a sit down in one undergrad lectures at UPSE.

Instead of listening to the Pope on economics, perhaps people should consider listening to undergrad lectures at UPSE or other universities. They will learn more. But if they want to hear stories for enrichment of the soul, then they should listen to the Pope.

Basic Economics by Thomas Sowell should be a very good primer. Highly recommended!