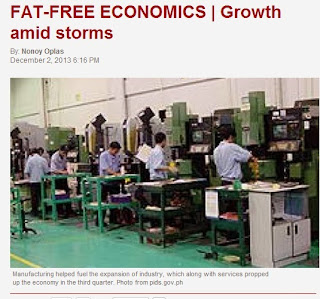 MANILA - By storms, we refer not only to natural typhoons and widespread flooding, but also to political storms that hounded both the Legislative and Executive branches due to the prolonged pork barrel scandal in the third quarter this year. It remains surprising therefore that the Philippine economy was able to grow by seven percent in the third quarter.

In the first three quarters of this year, the Philippines' gross domestic product (GDP) has grown so far by 7.4 percent. Gross national income (GNI) -- previously called gross national product (GNP) and includes income by Filipino nationals abroad minus income by foreigners in the country -- grew by 7.3. Net primary income (NPI) or net factor income from abroad (NFIA) grew by 6.7 percent.

Growth in per capita GDP, GNI and household final consumption expenditure (HFCE) are also shown below. All tables were taken from the National Statistical Coordination Board (NSCB) presentation titled Performance of the Philippine Economy, Third Quarter 2013, except the table from The Economist.

Compared to the growth of other emerging economies, Philippine growth figures are indeed high, next only to China.

And if compared to the industrialized countries, the Philippines’ GDP growth figures should be an object of envy of many European economies. The Euro area is projected to sustain its economic contraction by an estimated 0.4 percent this year, according to The Economist’s poll. Japan and the US are expected to have modest growth of 1.9 and 1.6 percent, respectively.

Where did fast growth come from?

Agriculture, hunting, fishery and forestry (AHFF) showed a near-flat performance with just 0.3 percent growth last quarter over its year ago level. Huge growth was contributed by the industry and services sectors, growing by 8.2 and 7.5 percent, respectively.

Within industry, manufacturing was the largest contributor, growing by 9.7 percent, followed by electricity, gas and water. Mining's contraction was not that big anymore, just -0.8 percent. This is because production was already low since last year. Manufacturing also contributes nearly three-fourths of total output of industry.

In services, double-digit growth of 12 percent was contributed by financial Intermediation (banks, stock market, foreign exchange trading, mutual funds, etc.) and real estate. The latter is also the biggest contributor to services, contributing one third of its total output, followed by trade and financial intermediation.

Aside from the above measured growth by industry or by sector and sub-sectors, there are also other indicators that support such growth data below. 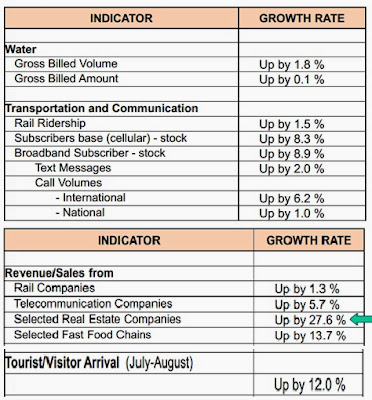 The two biggest contributors to GDP are HCFE (about two-thirds of the total) and durable equipment or investments (nearly a third).

The important lessons on why the Philippine economy was able to sustain the seven percent GDP growth are the following:

One, on the supply side, the agriculture, fishery and forestry sector needs particular market dynamism. It is here where there is large government spending -- through the Departments of Agriculture (DA), Agrarian Reform (DAR), Environment and Natural Resources (DENR), Public Works and Highways (DPWH), state universities and colleges (SUCs), local government units (LGUs) and pork barrel spending by legislators -- and yet growth remains anemic. While crop damage due to typhoons and flooding is indeed an important factor, it does not explain much because growth figures are computed on year-on-year basis, i.e., July-August period against the same three months of the previous year.

Dynamism in the industry and services sectors should help infect the agriculture sector. A move towards more corporate farming that use more science-based farming techniques should greatly help the sector.

Two, the services sector (both formal and informal) is an important forward linkage of agriculture and industry. High output in poultry and piggery farms for instance supports fast growth in the restaurants, fast food, tourism, and food manufacturing sub-sectors. Thus, while production value in the agriculture sector did not grow fast, high value-added in the services sector saves the day, resulting in higher overall GDP growth.

Three, manufacturing remains the anchor sub-sector of industry. Various policies -- taxation, labor, environmental, others -- that can adversely affect this sector should be avoided as much as possible.

Five, on the demand side, our big population is an important factor why HFCE remains the biggest contributor to GDP growth. More people means more entrepreneurs and workers, more producers and consumers.

Six, continued and sustained positive news about the economic performance of the country despite political storms and natural typhoons, have contributed to improved and higher investments in the country, captured by high growth and high contribution to GDP of durable equipment.

Finally, the government must sustain market-oriented reforms that attract both local and foreign entrepreneurs to invest in the country. Things remain bad or at least not so optimistic abroad, both in North America and Europe. Emerging markets in Asia like the Philippines continue to attract the attention of those entrepreneurs abroad who are thinking of jumping ship.

Posted by Bienvenido Oplas Jr at 1:56 AM