* This is my article for the December issue of this magazine, published in Kathmandu, Nepal.
--------- 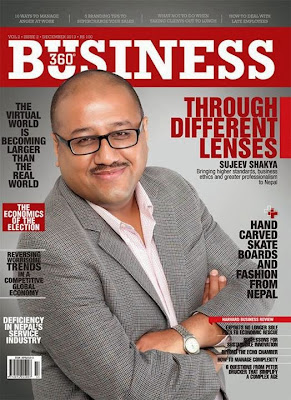 People need to be given enough leeway to be creative and innovative in introducing new products and services to their consumers, resulting in continuous and endless process of innovation and healthy competition among the various players in the economy.

This fact is among the lessons drawn from the two-days Economic Freedom Network (EFN) Asia  conference in Bangkok, Thailand in October. 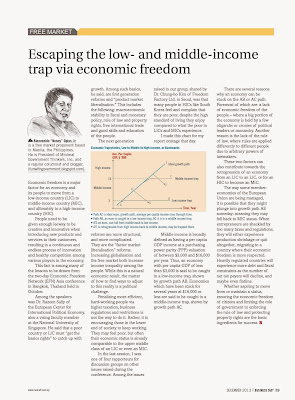 Among the prominent speakers of the conference was Dr. Razeen Sally of the European Center for International Political Economy, also a vising faculty at the National University of Singapore (NUS). He said that  a poor country or LIC must “get the basics rights” to catch up with growth. Among such “basics” are 1st generation reforms, “product market liberalization.” This includes the following:  macroeconomic stability in fiscal and monetary policy, rule of law and property rights, free international trade, and good skills and education of the people.

The next generation reforms are more structural and more complicated.  They are the “factor market liberalization” reforms.  Increasing globalization and free market does increase income inequality among the people. While this is a natural economic result, this is also a political challenge how to face this reality and find ways to address it.

Penalizing more efficient, hard working people via higher taxation, more business regulations and restrictions is not the way to do it. Rather, it is encouraging those in the lower end of society to keep working. They may feel “poor” when in fact, their economic status is already comparable to the upper middle class of a LIC or even a MIC.

In the last session, I was one of four rapporteurs for the four discussion groups on other issues raised during the conference. Among the issues raised in our group was shared by Dr. Chung-ho Kim of Freedom Factory Ltd. in Seoul, that many  people in HICs like S. Korea  feel and complain that they are poor, despite the high standard of living they enjoy compared to what the poor in low income and middle income countries experience.

I made this chart in my report on stage that day. 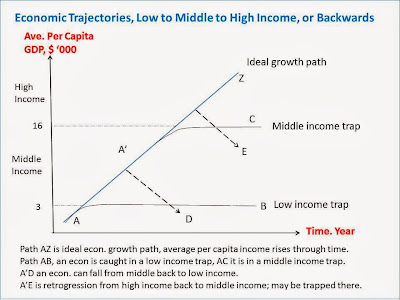 There are several factors why an economy can be stuck at AB or AC path. Foremost of which are: lack of economic freedom of the people -- where a big portion of the economy is held by a few oligarchs or business cronies of high political leaders or monarchy. Another reason is the lack of the rule of law, where rules are applied differently to different people due to arbitrary powers of lawmakers.

These two factor can also contribute to a retrogression of an economy from a lower  middle income to an LIC and go back to low income country. Or for an HIC to become an MIC.

The way some member- economies of the European Union are being managed, it is possible that they might plunge into growth path A’E someday, meaning may fall back to MIC status. When entrepreneurs are shacked by too many taxes and regulations, either they will experience production shrinkage or quit altogether, migrating to another country where their economic freedom is more respected. Heavily regulated country will experience more debt and fiscal constraints as the number of net tax payers will flatline if not decline.


Whether aspiring to move a status, ensuring the economic freedom of the citizens and limiting the role of government to enforcing the rule of law and protecting property rights, are the basic ingredients of success.
--------------