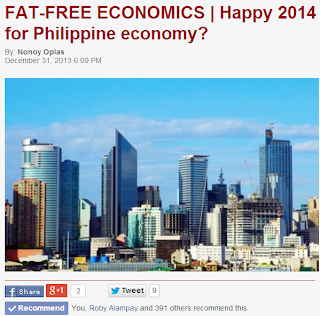 Another tumultuous year has passed. 2013 can be remembered as the year of huge disasters, with Typhoon 'Yolanda' (international name: Haiyan) causing death and massive destruction across several provinces in central Philippines in early December. A month before that, a big earthquake also devastated the central provinces of Bohol and Cebu.

On top of natural calamities, the Philippines also endured a political storm in the second half of this year, with the pork barrel scandal tarnishing the image of the Legislative and Executive branches of the government.

Against that backdrop, what can we expect for the Philippine economy in the coming year? Several big global institutions have produced their own economic forecast for 2013 and 2014. In a poll of some of the world's biggest private banks and securities companies, the Economist magazine came up with the following estimates: 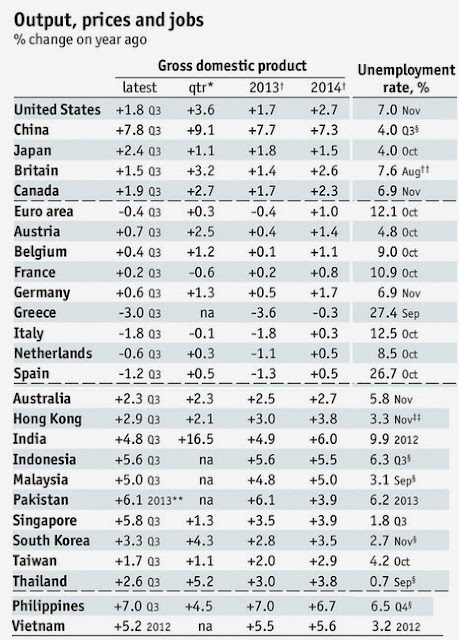 Pessimism about the economic prospects of the Euro area remains this year, with Greece, Italy, Netherlands and Spain all seen to contract. In 2014, they are projected to have modest growth.
Both developed and emerging markets of Asia are seen to grow faster than the Euro area and North America. Expected to have the fastest growth in 2013 and 2014 are China (7.7 and 7.3 percent, respectively), the Philippines (7 and 6.7 percent), India (4.9 and 6 percent), Indonesia (5.6 and 5.5 percent) and Vietnam (5.5 and 5.6 percent).

All fast-growers in Asia have big populations upward of 90 million. The banks polled recognize that a larger population means more entrepreneurs and workers, more producers and consumers.

Next, we check projections by the global vanguard of macroeconomic and external account stabilization, the International Monetary Fund (IMF). Its most recent and most comprehensive report is the World Economic Outlook (WEO) released last October. We arranged the grouping of countries to be similar as that by The Economist for easier comparison of projections.

Belgium, Italy, Netherlands and Spain are among Europe's biggest economies, and they are either crawling or backsliding. The US and Canada are performing better than those in Europe but their expansion not fast enough to compensate for sluggish growth on the other side of the Atlantic Ocean.
Asian economies -- led by China, Japan, India and South Korea, plus the other tiger and emerging markets of the continent -- continue to hum and push the world economy to modest growth. The Philippines is projected to be second to China in pace of growth this year and next year. 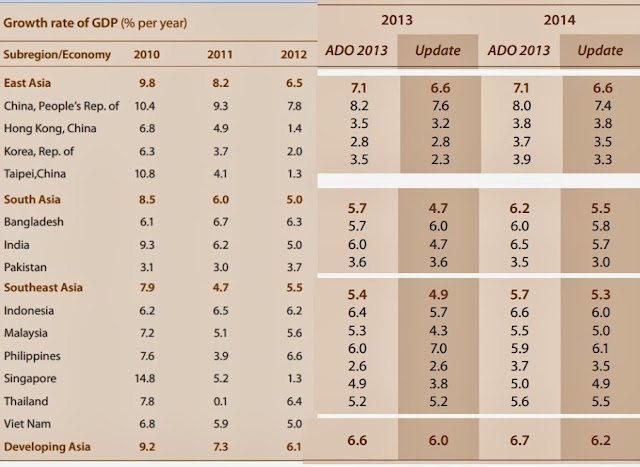 Within six months between the regular and update reports, ADB made some drastic changes in its growth projections, generally a downgrade. For this year, the lender cut its forecast for China from 8.2 to 7.6 percent; Taiwan, from 3.5 to 2.3 percent; India, from 6 to 4.7 percent; Indonesia, from 6.4 to 5.7 percent; Malaysia, from 5.3 to 4.3 percent; and Thailand, from 4.9 to 3.8 percent.
Only two countries were given an optimistic view: Bangladesh, up from 5.7 to 6.0 percent, and the Philippines, from 6.0 to 7.0 percent.

We note the same trend of downgrades for 2014, except for the Philippines. But with the destruction in property and decline in productivity brought about by Yolanda, it is not clear if the ADB and other institutions will retain their forecasts made two or three months ago.

We now look at the Philippines’ recent growth performance. From the first to third quarters this year, GDP growth stood at 7.4 percent, higher than last year's 6.7 percent. Growth for the entire 2012 stood at 6.6 percent.

The table below describes this performance, starting with the aggregate growth, then broken down into the supply side -- agriculture, industry and services -- and finally, the demand side -- household consumption (HFCE), government consumption (GFCE), investments (construction, durable equipment, etc) and net exports (exports minus imports of goods and services). 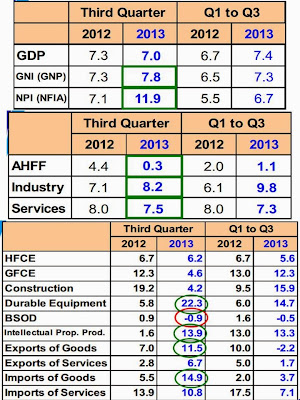 On the demand side, the industry sector this year grew rather fast compared to last year, but growth in agriculture and services slowed from last year. On the supply side, investments -- through construction and durable equipment acquisitions -- grew very fast, but there was a slowdown in both household and government consumption.

If we average the three forecasts above and the three-quarter performance, here is how the Philippines’ growth forecasts in the short term would look like. My own projection is made using actual growth data for the first three quarters of 2013.

A growth rate of six percent or higher will make many countries around the world salivate with envy. Aside from having a low economic base -- which tend to allow for higher growth compared to those with a higher base -- the Philippines is doing something good recently that may have been overlooked by those who tend to self-flagellate and focus on the negative too much.

Aside from ensuring solid infrastructure like reliable and cheaper electricity, more expressways to transport people and goods, dredged rivers and lakes to minimize frequent flooding in a period of global cooling, there is also a need to focus on freeing the entrepreneurial spirit of our people. Less bureaucracy, less politics, less regulation and restrictions will greatly help our people -- from ordinary workers to micro- and big entrepreneurs -- produce more goods and services. More output means more stable prices, more jobs created, and less poverty.