Now some legislators and the advocates of the law are asking, where is that money?
See various reports yesterday,


This is one reason why earmarking legislation, setting aside the projected revenues to particular sectors and government agencies, is wrong. I don't support earmarking of any revenue measures from new tax or tax hikes, or privatization proceeds. The supposed beneficiaries of earmarking are setting themselves for great disappointment. This happened after Fort Bonifacio privatization, others. Will happen in the future.

Soon, PAGCOR will be privatized, there is no way out with huge public debt of the government, rising by P400-P450 billion a year (!!!) but to privatize it and a few other govt corporations. Other agencies like DepEd, SUCs, LGUs, etc. will lobby for earmarking too for themselves, to the exclusion of other sectors or departments. Wrong. New revenues from whatever sources should be used mainly to reduce the public debt. Savings from interest payment alone, P330-350 billion a year, can be used for priority sectors and departments.


Those who campaigned hard for the passage of this law need not throw the towel. For now, it should be a lesson for them that earmarking legislation is wrong. They are setting themselves for huge disappointment.

They should also watch PAGCOR privatization, at least P200 B or more, of additional revenues, but other Departments will lobby for earmarking, and exclude public health, agri, etc. Winner take all for the strongest lobbyists among different agencies.


DOH UnderSec Ted Herbosa said that the DOF releases tax collections only after the collection year is completed. Sin tax collections from Jan. 1-Dec 31, 2013 is now in the 2014 budget. P33 B to fund the health premiums for NHIP of the poorest 14.7 million families or estimated over 40 million Filipinos.  Hospitals may get their increased income by providing health services to these Filipinos who were previously uninsured.

I thanked him for his good clarification, but while additional tax revenues were realized, the PH public debt keeps rising. From P5.21 trillion in Sept. 2012 to P5.61 trillion in Sept. 2013, or P400 trillion rise in one year. A P6 trillion total public debt by middle of this year seems no sweat. And that exposes one problem of budgetary earmarking -- luck to one or two department/s, woe unto others. When PAGCOR, other parts of Fort Bonifacio, other military camps, etc. will be privatized, woe unto other departments too as they will be excluded from additional revenues. Meanwhile, the public debt, and annual interest payment, will keep rising, and keep depriving everyone else of more money, they will go to the pockets of lenders. About P352 B this year on interest payment alone. http://www.treasury.gov.ph/.../NGDebtSept2013... 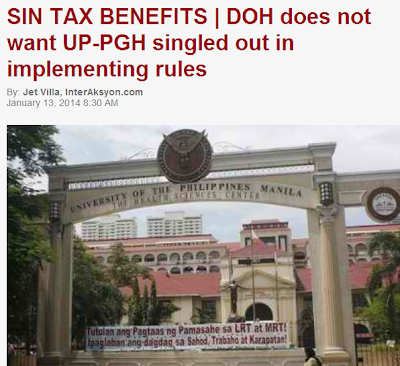 Meanwhile, see this new development. DOH is not so much a fan of the UP PGH, it thinks that the Department has been giving away research money somewhere else. From interaksyon,
----------