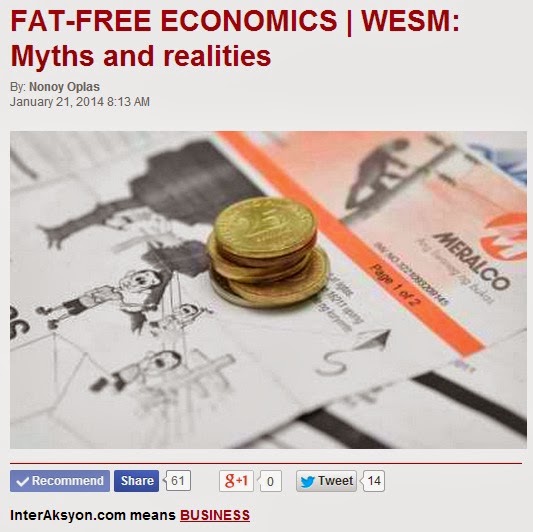 With the debate on whether the power generation rate increase -- mistakenly referred to as "Meralco rate hike" -- is justified or not, the role of WESM has been put under question.

Below are some allegations or criticisms about WESM:

1.  DUs or electric cooperatives like Meralco collude with certain power generators and bid up the price at WESM.

2.  DUs and bulk consumers can easily buy forward contracts or buy electricity for specified short periods in the future to cover any foreseen exposure they may have. This is on top of their long-term bilateral contracts with power generators.

3.  DUs who buy at WESM would know who supplied them power at any time, any day.

4.  It is “a misnomer, a huge farce: More than 90 percent of its transactions aren’t spot trading transactions at all. They are bilateral contracts, with the price and quantity not having anything to do with market conditions at any given time.”

5.  The rule that WESM “must offer all available electricity capacity to the spot market” is mocked and disobeyed by many power companies by offering the maximum bid of P62 per kilowatt-hour (kWh).

6. WESM and its high rates in the November-December period could have been bypassed by running the state-owned Malaya power plants.

How true or valid are these allegations? Let us tackle each of them -- with hard data.

1.  The allegation of collusion between some DUs like Meralco and power generators is belied by the average generation cost in 2013 -- P5.52 per kWh – which was lower than the P5.76 in 2012. The spike in the December billing – which was based on the November generation cost -- was mainly due to the absence of cheaper natural gas from Malampaya, and the purchase of more expensive power from diesel plants, so that brownouts would be avoided.

To prove “collusion,” one must show who colluded. Barring this, collusion is simply an allegation. Item number three below will illustrate why identifying who colluded is impossible. 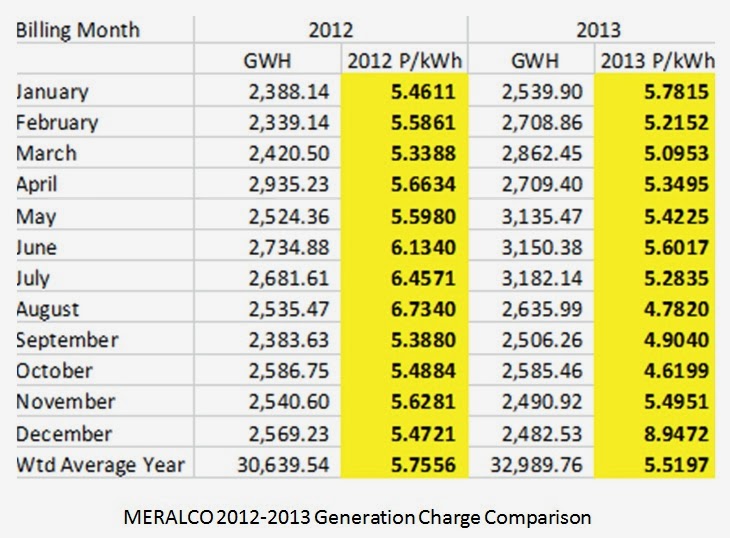 2.  DUs and bulk consumers can buy or contract electricity at WESM – say about 10 percent of their projected demand -- just one or two hours ahead, not weeks or months ahead. There is an allowance if some of its contracted generator plants will conk out or suffer output reduction due to mechanical problems, or the demand would suddenly go up.  It is a spot market and as such is characterized by price volatility. But at least power supply is delivered, and disruption or a brownout, is avoided. When supply exceeds demand by a wide margin, the price goes down. When this margin narrows, the price goes up.

Here is a short history of WESM prices from July 2006 to November 2013. The three outliers, January 2009 – when prices were very low -- and February-March 2010 and November-December 2013 – when prices were very high -- are explained in bold sentences. Note the lower cost of WESM load-weighted average price (LWAP) compared to average Napocor rates. 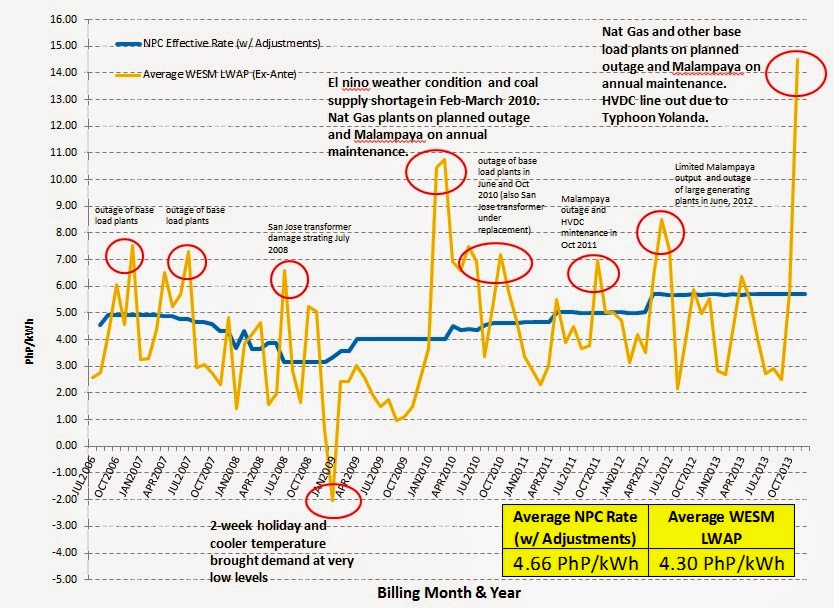 3.  Knowing who sold power and by how much at WESM is fungible. When you buy, you no longer know from which plant and how much power is coming, so there is no way Meralco or ERC can know. Suppose there are 10 generators (excluding those covered by bilateral contracts) supplying WESM in a given hour, and there are 60 buyers (excluding those covered by bilateral contracts) during the same hour, it is impossible to attribute to one generator any output bought by a buyer.

Take this case. On December 6 -- or two days before Typhoon ‘Yolanda’ struck Eastern and Central Visayas -- coal and hydro plants could produce less than 5,000 MW in Luzon, while demand stood at 5,400 MW. More than 3,200 MW of power were either on planned/scheduled shutdown or on forced outage. The oil/diesel plants provided the power to address demand that coal and hydro could not supply. But the supply came at a higher price, in exchange for no brownout that day in Luzon. 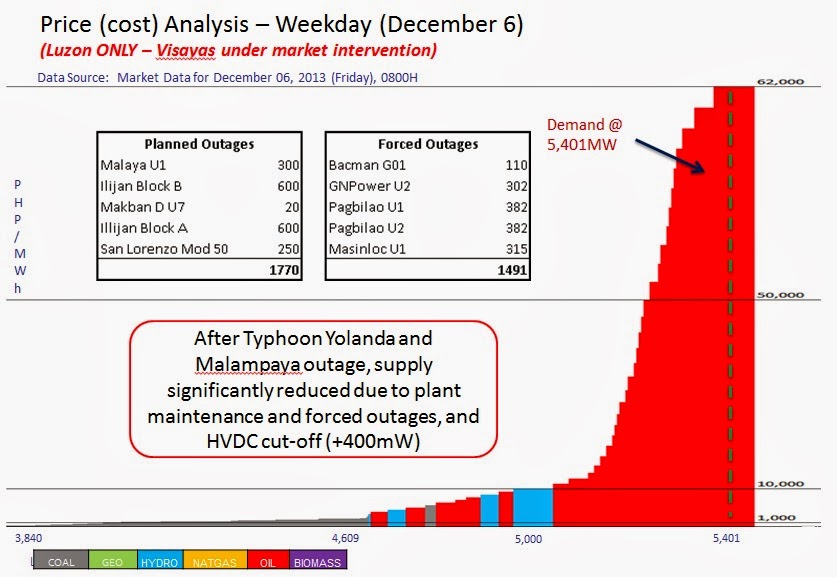 Knowing which among the various oil-based power plants supplied how much energy to different DUs and bulk consumers at different prices at different hours of the day cannot be determined. DUs decide whether to buy at that particular price that hour, or beg off on those hours and suffer brownouts in certain cities and municipalities of their franchise area.


4.  On the notion that bilateral contracts, not spot trading, rule WESM, a friend from the power generation sector sent me this observation:

“There used to be a limit of 90 percent on bilaterals, which was designed to ensure that some transactions were left to the spot market, but only for the first five years of the WESM (expired 2011).  Now there is no limit other than the mandate that all distributors source their generation at the least cost for the captive market.  WESM pricing is very volatile and most utilities do not want the volatility and will contract most if not all of their requirements, sourcing only the imbalances from the spot market.

“The imbalances tend to happen at peak hours, since Meralco should ordinarily have enough bilateral contracts to cover their baseload and even intermediate needs.  This means they are buying from WESM at the peak hours so their cost will be higher than the average WESM (the 33/kWh November 2013 vs 11/kWh that Bobi Tiglao was talking about). This is not necessarily bad, since the rest of the time Meralco was buying from their bilateral contracts at prices that in November (for Dec generation bill) ranged from P3.75 to P9.97 (the P9.97 I believe included the alternative fuel cost by previously nat-gas running plants).”

Here are the day-by-day power plant shutdowns from late October to early December 2013. 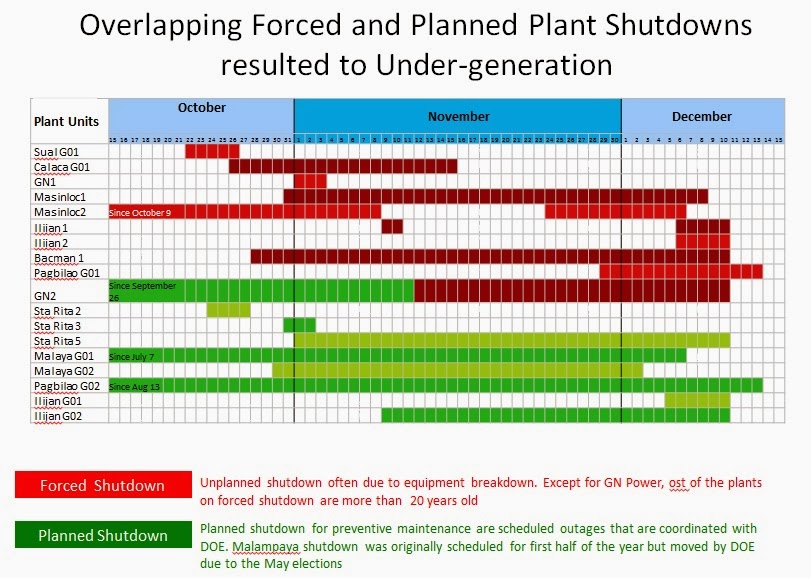 As shown in the above chart, the combination of scheduled outages (especially by cheap natural gas-running plants) and of unscheduled or forced outages (especially by coal plants that are second-cheapest next to natural gas) resulted in power under-generation. The power deficit can be supplied by the more expensive peak-load oil plants. DUs like Meralco then had only two options: buy from these more expensive power plants, or beg off and have rotating brownouts while keeping the old rates for billing customers.

When people curse even a half-hour brownout, or are willing to buy gen-sets running on expensive oil, that shows their unwillingness to suffer brownouts and their readiness to pay higher for electricity. Unfortunately, some are unwilling to divulge that much by going to the streets or taking their cause to the media or the Supreme Court.

5. On abusing the P62/kwh maximum bid price, the same friend observed that a DU like Meralco could possibly have contracted more standby capacity and assume capacity cost even if the plants are not running.  This pricing tradeoff will determine its maximum bid price in the spot market.
Here is an illustration using hypothetical numbers. Suppose a 1 kW diesel peak-load plant has the following costs:

Even on a weekend and on the day that Typhoon Yolanda struck central Philippines, electricity demand was high. Should be due to many Christmas parties and reunions, some factories, the malls and tiangge that were open until late evening, not to mention the many night markets sprouting. 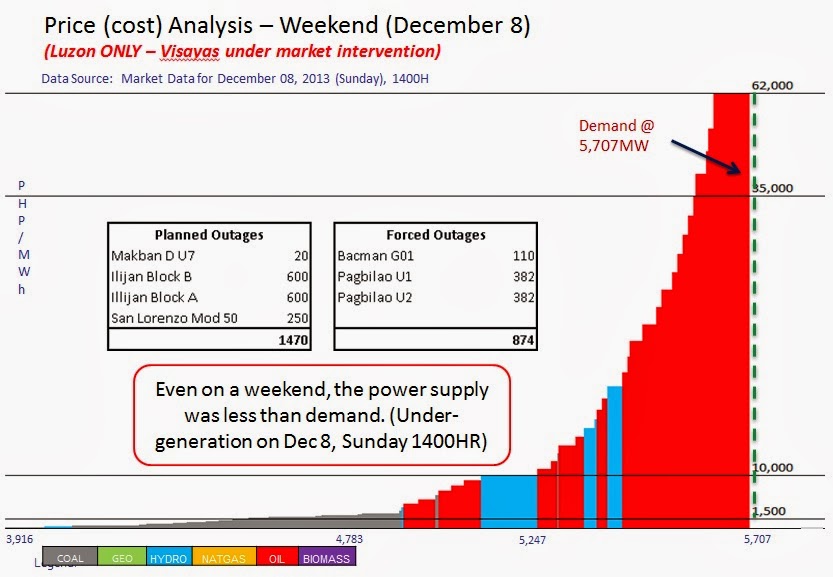 When a power company bids the P62/kWh maximum price in WESM, it does not mean that it automatically wants to abuse a particular situation of extra high demand relative to power supply at a particular hour of the day. WESM, as mentioned above, has a rule that power generators must “offer all output” to the spot market.

If a power plant with, say 100MW capacity, needs to slow down one or two turbines to prevent a possible unscheduled or forced shutdown the next day due to some mechanical troubles, what it does is to bid, say zero to P1/kWH, for the first 25 MW (this means automatic dispatch of their power supply, so they can fulfill their power contract to a particular DU).

6. On running the state-owned Malaya power plants, chart 4 above shows that Malaya 1 had been on maintenance shutdown between July until early December, while Malaya 2 was similarly shut down from late October to early December. Even if the Department of Energy (DOE) ordered the plants to run on expensive diesel fuel, they won't run. Reserves were really thin or tight in the November-December period because of the confluence of planned and unplanned shutdowns of several big power plants. 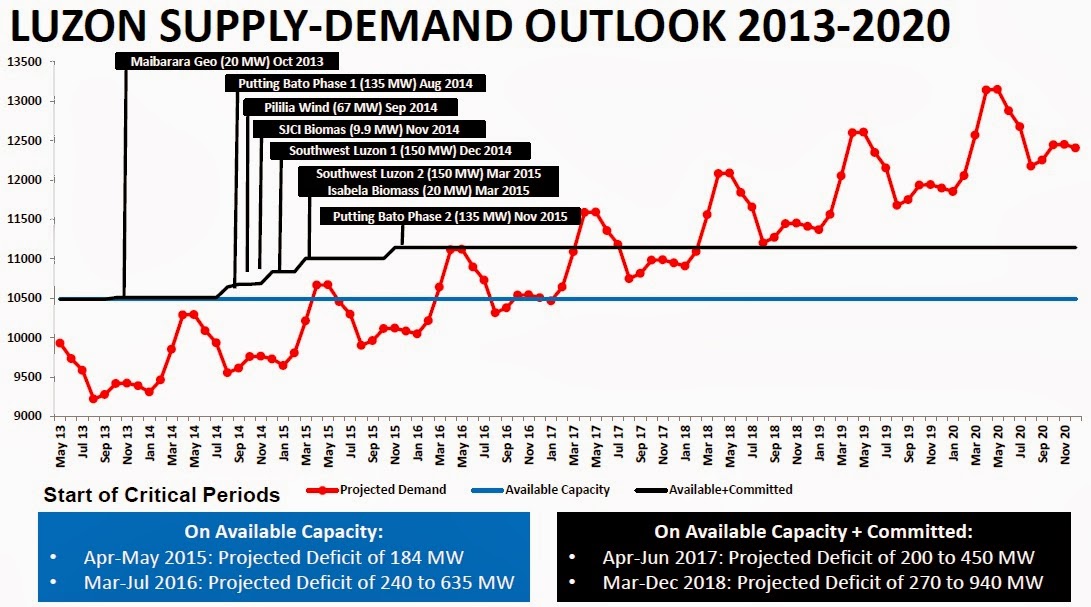 If the projected demand (if not higher) comes to pass, brownouts are going to happen in Luzon by April-May 2015. The chart also shows that for the April-May period this year, reserves will be very thin but sufficient to provide power, assuming not one of those big power plants will suffer from unscheduled shutdowns. For power plants that are 20 years or older, this assumption is likely to happen.

That is why during the peak summer months, limited brownouts in Luzon are likely to happen. And many people will complain again -- when electricity rates go up, when costlier electricity is not provided in exchange for brownouts.

What are the lessons from this debate?

2. Price volatility in the spot market is the tradeoff of power supply-demand volatility and uncertainty. Peak load power plants were invented mainly to plug this short-term (a few hours per day) power deficit, and there is a premium for such short-term use and supply of power, which prevents brownouts.

4. Such power generation rate hikes are a necessary evil. They are bad but having rotating brownouts, buying expensive gen-sets running on expensive oil, or enduring candles at night and risking fire, are equally bad, if not worse. The rate hike should have been temporary, only for December 2013 and January 2014, with the old rates resuming next month. With the Supreme Court temporary restraining order (TRO) on the rate hike, the debate on politicized electricity pricing will extend until March-April, if not beyond.

5. Allegations of collusion in WESM between DUs like Meralco and power generators are just allegations. It is not possible to pinpoint who supplied how much to whom at different prices at different hours of the day. It is also not possible to suddenly contract power for succeeding weeks or months at the spot market. The lead time is only one or two hours, not one or two weeks or months.

6. To prevent or minimize this occasional politicized electricity pricing involving not only the DOE,  ERC and Congress, but even the Supreme Court, there should be (a) more power plants, the reliable ones running on cheap energy sources like natural gas, geothermal and coal, and (b) proper or better maintenance of existing ones, especially those that are above 20 years old.

7. To bring down electricity costs, government taxes, fees and royalties should significantly shrink and decline. The value added tax (VAT) should also not apply on system loss charges, unless there is a zoombie value deducted tax (VDT) because system loss is electricity deducted from additional supply to consumers.

8. To add more power plants, especially cheap energy sources like natural gas and coal, government bureaucracy, permits, regulations and prohibitions should significantly shrink and decline. Some permits should be collapsed or abolished.

9. Hydro is also cheap. To have more hydro power plants, there should be more dams. Global cooling means more rains, more flood, more water every year, not less. The excess rainwater and flash flood should be impounded by more dams, in turn producing more hydro power. After producing hydro power, the excess water can be used for drinking (after being purified of course) or irrigation.