I like this new article by Romy Bernardo. My comments after his paper, below.
---------

The way forward for the power industry 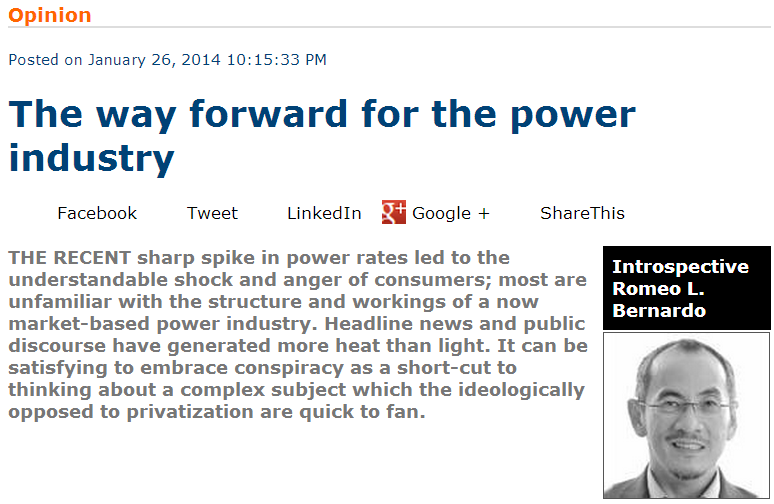 THE RECENT sharp spike in power rates led to the understandable shock and anger of consumers; most are unfamiliar with the structure and workings of a now market-based power industry. Headline news and public discourse have generated more heat than light. It can be satisfying to embrace conspiracy as a short-cut to thinking about a complex subject which the ideologically opposed to privatization are quick to fan.

What is emerging though from various congress hearings and submissions to the Supreme Court, is that this temporary two month spike was a product of a most unlikely and unfortunate perfect storm of planned and unplanned plant outages on top of already thin reserves. And what failures there were arose not from collusion, but from a bid and offer system that requires further refining, and perhaps, from insufficient diligence.

By way of disclosure, I was Undersecretary of Finance during the last two years of Aquino 1 and the first four years of Ramos administrations, an independent director in one major publicly listed power company and in an unlisted diversified holding company active in the energy business. While in government, I was involved in trying to addresss crippling blackouts in the early 1990’s that led the government to contract Independent Power Producers (IPPs) as part of the solution. Quick solutions had to be found -- the most expensive power was no power. Due to the outages, GDP flatlined for two years, 1990/92, lost output of P800 billion in today’s prices, equivalent to twice the cost of government’s infrastructure budget last year, or 20 years of its conditional cash transfer program. This is not even counting investments that were driven away, and the country’s lost momentum.

I resurrect this dark episode in Philippine economic history as a background to what may ensue if counterproductive actions are taken that lead to underinvestment yet again in power generation. Under the Electric Power Industry Reform Act (EPIRA; 2001) it is private sector players who are expected to deliver electricity under a competitive playing field, with government providing the enabling environment. This national policy was not arrived at willy-nilly but after seven years of debate both within the executive department and in Congress, with the active participation of all affected publics.

Modelled after successful privatizing countries, EPIRA was a recognition of the fiscal and institutional limitations of government in building and running power assets efficiently. As we know, such led to costly under-provision during the blackout years, and expensive stranded costs when the long-term growth forecasts failed to materialize post 1997 Asian Crisis.

Today many questions have been raised on whether EPIRA was a success. I submit that, while there has been a delay, a fair call is “so far, so good.” EPIRA has provided the framework for the restructuring of the Electric Power Industry, including privatization of National Power Corp.’s assets, defining the responsibilities of various government agencies and the private sector, and transitioning to a functioning competitive structure. The end goal was to make sure we had an ample and reliable supply of electricity, at reasonable and competitive rates.

What has happened since EPIRA was passed?
1. Privatization of the Power Sector Assets and Liabilities Management Corp. (PSALM) assets began with a slow start, but started to gain traction in 2006. To date 80% of the country’s generating plants have been sold, and a slightly lower number of contracted capacity has been privatized through IPP administrators. Transmission is now under a regulated private company. From less than a handful, there are now over a dozen players in the industry, including heavyweights like San Miguel, Metro-Pacific, Ayala, the Metrobank group, DMCI, and Filinvest, who were never in the power business before.

2. WESM/PEMC (Wholesale Electricity Spot Market/ Philippine Electricity Market Corp.) was established and is now a fully functioning trading platform. This is crucial in a market based system, providing an outlet for excess supply, and valuable signals for efficiency in despatch and for new investments.

3. Performance Based Rate setting was introduced and on the way to reaping the gains from replacing a backward-looking return on rate base tariff regime to one which provides strong incentives to improve efficiency and service quality, forward looking capex over a regulatory reset period, and benchmarking utilities against each other.

4. Open access was introduced last year after long delays. This is crucial to developing a competitive market. The thresholds now of 1 MW and above represents around a quarter of the Meralco and Visayan Electric Co. (Cebu area) service area total demand. This will bump up to 40% once the threshold is brought down to 0.75 MW.

5. EPIRA removed one of biggest sources of public debt burden and contingent macroeconomic risks. This was an important factor to our investment rating upgrade -- and lowered borrowing cost for government and private sectors alike, and helped improve overall economic performance.

A common complaint has been that under EPIRA, power rates have actually gone up faster, and that, as a consequence, we now have the highest power rates in the region. While it is true that our rates are higher than our neighbors’, this is because substantial subsidies have been removed as mandated under EPIRA so that “true cost of power” is adhered to while our neighbors continue to subsidize.

For example, Indonesia, Malaysia and Thailand have large oil and natural gas deposits and do not charge royalty on local sales. In contrast, the Philippines collects a royalty of about P1.46 per KWH of our own natural gas. Moreover, fuel prices for Malampaya and geothermal resources are indexed to international fuel prices. In a recent column, Boo Chanco estimated that around P3 of the average Meralco electricity charge is on account of government take.

According to a recent US Agency for International Development (USAID) study (“Challenges in pricing electric power services in selected ASEAN countries, 2013”) the fastest growing component of electricity rates is taxes -- zoomed by a compound annual growth rate of 65% from 2004-11. Once stripped of this and other adjustments, electricity rates only grew by 5.3% annually during this period, around the same as general inflation and cost of fuel. That is to say, tariffs net of taxes stayed constant in real terms, and for many under open access, actually dropped.

I do not disagree, however, that EPIRA has yet to fully deliver on its promise, as the recent black swan rate hike event and the shortages in Mindanao illustrate.

The right course though is not to turn back, but to go forward without further delay to complete its full implementation. And to execute better.

1. Government needs to be more active in encouraging generation and supporting private power developers in every way. The appetite to invest is there but developers are running into road blocks with “not in my backyard” advocates and unsupportive government units (eg. The 600MW RP Energy in Subic is two years delayed, now pending judicial resolution of the writ of Kalikasan).

2. Continue to lower the threshold of Open Access so end users can make their own choice of power suppliers. Generators can look at end users as a competitive market, and thus by-pass distribution utilities, the monopoly segment of the power industry.

3. All distribution utilities and coops can be made to contract 100% of their requirements for their “captive market” (i.e. those not under Open Access) to ensure this segment of the market does not carry the brunt of thin reserves through volatile and higher tariffs.

4. The National Electrification Administration (NEA) needs to provide guarantees with automatic remedies, like a bond or L/C that can be drawn to make some rural electric cooperatives credit worthy. This will need to go hand in hand with NEA exacting financial and management disciplines on erring co-ops. And stronger political will to cut-off recalcitrants. This and item (3) will also ensure there is no under-provision by Gencos for the system as a whole because deadbeat co-ops are netted out in their demand forecasts, resulting in thin reserves.

5. The Energy Department and Energy Regulatory Commission (ERC) have to be proactive in managing the market, including ensuring that the systems operator National Grid Corporation of the Philippines (NGCP) fully contracts what the system requires. The establishment of a reserve market has been long delayed.

I end this column with two notes. First, on the implementation of EPIRA -- we have no choice but to move forward -- we cannot put the toothpaste back into the tube.

Second, on the recent suspension of payments to Meralco and operators of Gencos -- this is “a gift to the Filipino people” as headlined only if the law of supply and demand has been suspended in the Philippine islands. What actually needs to be done is to de-risk the sector from political and regulatory uncertainty to make the market work and encourage more investments, yielding more competition, ample supply and reasonable, less volatile tariffs.

(The author is a board member of the Institute for Development and Econometric Analysis and Philippine Advisor of GlobalSource Partners, a NY-based network of independent analysts.)
--------

My short comments to his concluding paragraphs.

Not true. Rather, government should become less active, should do less if not do nothing. Meaning regulate less, bureaucratize less, tax less. The biggest barrier to entry of new power plants, hydro or coal or natural gas, is a maze of regulations and bureaucracies from the Department of Energy (DOE), EMB/DENR, BIR, LGUs. Power companies will sprout like mushrooms once these barriers are reduced. The demand for additional power will always be there, forever.

Correct. Since significant reduction of government bureaucracy is not likely to happen within the next 10 years or more, big power plants will come in trickles. It's the small power generators that will fill the gap, like 1MW hydro, 5MW geothermal, etc.

The other three, I agree with them.

The build-operate-transfer (BOT) and related schemes as applied, where after 25 years the government will get and own the plants, there is questionable assurance of renewal for another 25 years. Corrupt officials can say, government already owns it as stipulated in the 25 years BOT, why renew with original owners, unless they are our cronies. Better give it to DOE Secreary and the President's friends and cronies.

Out of 25 years, about 8 years are to be consumed by pre-construction procedures like conducting  feasibility studies, getting financing or credit, dealing with indigenous people and LGUs, etc.

A small plant will not take much time and can live with this 25 years BOT period. But big plants will have little operating and profit years. The tendency is either bid for high price always to recoup the investments quick, or not build the plants at all.

And that is one major reason why power supply here is low and limited. And why power cost is high.
----------