Carbon dioxide or CO2, is a gas composed of one molecules of carbon and two molecules of oxygen. It's not a harmful gas, it is not an evil gas. But with the UN, Al Gore, and various campaigners of more environmental and energy regulations, more government, CO2 has been demonized. 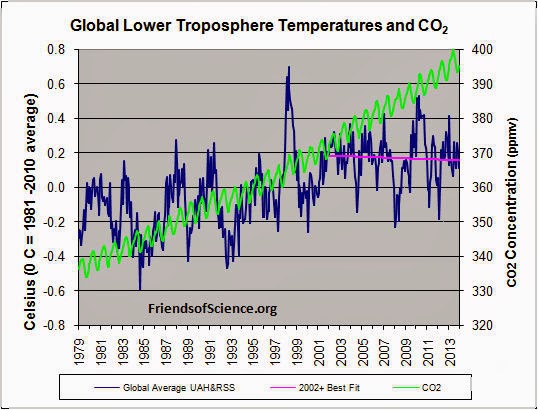 Here's a chart, global air temperature UAH and RSS average (blue) and their trend line (red) vs. CO2 concentration in the atmosphere (green), January 2002 to December 2013. There is "causality"?

A friend, Dr. Tony Leachon, posted yesterday in his facebook wall, "Global warming is everyone's problem, but which countries have contributed to it the most?"

I asked him, "Doc Tony, you are a scientist yourself. You believe in the claim that CO2 is a pollutant and harmful gas?"

Then Rosel DS joined. He wrote,
“Yes Nonoy, if CO2 is in excess as it contributes to the Greenhouse effect. US EPA Chief Jackson wrote: "In the endangerment finding, Jackson declares that current and projected concentrations of “the six key well-mixed greenhouse gases–carbon dioxide (CO2), methane (CH4), nitrous oxide (N2O), hydrofluorocarbons (HFCs), perfluorocarbons (PFCs), and sulfur hexafluoride (SF6)–in the atmosphere threaten the public health and welfare of current and future generations.” seehttp://www.forbes.com/.../epa-administrator-resigns.../

What happened to people’s high school or college biology? The gas that we and the rest of humanity exhale, the gas that our pets, farm and wild animals exhale, the gas that our plants, crops, trees use to produce their own food via photosynthesis, is CO2. It is a useful gas. No CO2, no plant life, no animals, humans that eat various agri crops. Now it is a harmful, pollutant, evil gas? Some institutions are just too corrupt to bend even basic natural science for their political agenda.

Rosel replied,
“Nonoy, we all agree on our biology basics. When in excess, carbon dioxide (coming mostly from industrial sources) becomes the primary green house gas that is the cause of climate change. I assume you agree on this. Hence for the public I share: http://www.epa.gov/climatechange/ghgemissions/gases/co2.html Do you have anything to add to enlighten the discussion? Lizbeth de Padua Dante Guanlao Simbulan Jr. Gina Lopez Doc Emer Jimmy Valena Thanks

“CO2 is an asphyxiant gas and not classified as toxic or harmful in accordance with Globally Harmonized System of Classification and Labelling of Chemicals standards of United Nations Economic Commission for Europe by using the OECD Guidelines for the Testing of Chemicals. In concentrations up to 1% (10,000 ppm), it will make some people feel drowsy. Concentrations of 7% to 10% may cause suffocation, even in the presence of sufficient oxygen, manifesting as dizziness, headache, visual and hearing dysfunction, and unconsciousness within a few minutes to an hour.[Wikipedia]”

His point, "When in excess, CO2... becomes the primary GHG..."
What is that excess? From about 285 ppm at the start of the Industrial Revolution or nearly 2 centuries ago, currently it's 400 ppm or 0.04%. Then you introduce 10,000 ppm, 70,000 ppm, you are introducing sort of zoombie dinosaurs and highly fictional stories. Get real. UN IPCC guys talk only of "doubling of CO2" (meaning about 800 ppm) to cause catastrophic/apocalyptic/horrific result in antropogenic global warming (AGW) of up to 4 C by the end of this century. Of course they mean "send us more money, lots and lots of money, and we will fight CC".

I suggested to Doc Tony that since he believes that  "CO2 is toxic", then he should be careful when he kisses his wife lips to lips too long, they will be poisoning each other as they both exhale CO2.

As I pointed out above, CO2 is a useful gas. No CO2, or very low levels of CO2 means plant extinction or near-extinction. No rice, no veggies, no grass for cattle, etc. In many greenhouse farming, CO2 as plant food and plant fertilizer, is introduced as supplement, up to 1,000 ppm. http://notrickszone.com/.../higher-co2-concentrations.../


Higher CO2 Concentrations Will Feed A Billion More People
notrickszone.com
If CO2 is increased 200 ppm above the current levels, (which have already increased production by the 13 to 15% cited above) production will increase by 13 to 15% (see here �and here ).

(2) Atmospheric CO2 Concentrations At 400 PPM Are Still Dangerously Low For Life On Earth
By P Gosselin on 17. Mai 2013

(5) Why and How the IPCC Demonized CO2 with Manufactured Information
Posted on November 13, 2013 by Guest Blogger