Thailand Politics and the Monarchy, Part 2 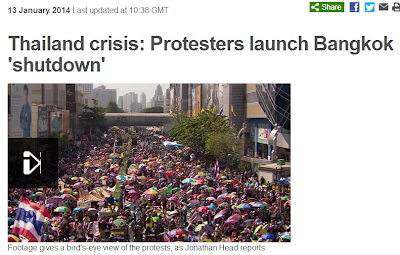 There will be a snap elections in Thailand on February 2 or less than 3 weeks from now. The Protesters can democratically and constitutionally remove the current administration if they succeed. But they want an unelected People's Council to assume power immediately with two years no election. Rule of law huh? Photo from BBC, http://www.bbc.co.uk/news/world-asia-25708092

The Democratic Party of Thailand does not seem to appreciate fully what rule of law and political liberalism really means.

Assuming the protesters including the Democratic Party will succeed in forcing the current government to step down without elections, they will be inviting another round of protests and "step down unelected" demonstrations. Despise for the rule of law invites another round of such despise, directed unto itself. 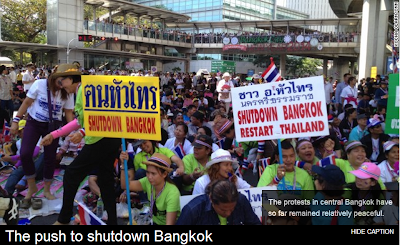 (Photo right from CNN). They succeeded in ousting Thaksin in 2006, and in all 4 or 5 elections after that, the Thaksin camp always wins an election, including the last election in 2010 where Thaksiin's sister, Yingluck, became Prime Minister. That is why the protesters are scared of elections, they know that they are mainly Bangkok-based, far from the rural voters where Thaksin made an impression there. The protesters know that they will always lose, that is why they advocate to set up a non-elected "People's Council", they select among themselves. And if they succeed, they do not want election for the next 2 years. Very undemocratic, even dictatorial.

There have been lots of military coup in Thailand before, but they hardly shot each other, it's called "coup de talk". The generals talk and threaten each other to relinquish power, if the military opposition has enough force on its side, the ruling military will give way. But somehow whatever faction wins, they have the approval of the monarchy.

Wrong policy on the part of the Democrat Party (DP, headed by former PM Abhisit Vejjajiva) to boycott the elections. They are affiliated with the Council for Asian Liberals and Democrats (CALD), supposed to advocate the primacy of rule of law. But the DP chose the rule of men option. Despise of traffic rules, despise of the constitution, despise of elections, They and the other opposition groups just want to install un-elected People's Council in power for two years with zero elections. http://edition.cnn.com/.../thailand-protests/index.html...

Not that I am pro-Thaksin. I am just pro rule of law. People should follow what is stated in their existing constitution.
-----------