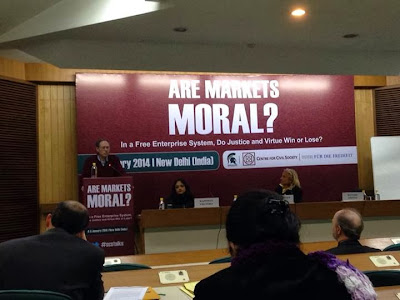 A good friend from Malaysia, Wan Saiful Wan Jan, posted this in his fb wall today, a forum he attended in Delhi, India.

"Are Markets Moral?" My answer is Yes. No one is putting a gun on someone's head to sell or buy something. Competition, not coercion or monopolization, gives more choices, more freedom, more happiness, to people.

"In a free enterprise system, do justice and virtue win or lose?" They win. Voluntary exchange, absence of coercion, gives justice to people. The only coercion that must be maintained, is to over-penalize, over-bureaucratize, criminals like murderers, thieves, abductors, rapists, land grabbers,...
friend, Andrew Sheldon, commented that markets per se are not moral or immoral, that moral agency lies with market 'participants', and how they conduct themselves.

Sound comment. Market participants behave based on existing rules. If rules are in favor of suppliers of goods/services, such participants are likely to abuse it. For instance, if a particular area has been assigned as a "tricycle route monopoly" (ie, no jeepneys, no buses, no air-con vans allowed), one can expect tricycle drivers to abuse it, like packing 5-6 passengers instead of the more comfortable 3, passengers have no choice anyway.

Markets by definition imply competition, not monopolization. When government comes in, it often creates monopoly privilege to certain sectors, like the tricycle drivers and operators, and deprive the ordinary passengers freedom of choice to take air-con vans or jeepneys.

Andrew replied that “markets are not always so formalised, and everyone does not necessarily agree with the rules, which are not always clearly cut, and sometimes illegitimately stated by govts, so they breakdown, and people make their own rules, perhaps in effect, negotiating a 'sub-market' rule book. I don't think markets are necessarily competitive; it just adds to their dynamism or choice. Markets are profoundly 'voluntary'.”

I believe the "default mode" is that everything should be a "contestable market". People (sellers and buyers, producers and consumers) can go in anytime, can go out anytime. They can do business anytime, or they can pack away in losses or bankruptcy anytime.

When there are no formal rules respecting competition, some bullies can terrorize all potential competitors and declare a monopoly or cartel in a given area. So the premise of "Are markets moral?" question should refer to a contestable market, not a rigged or terrorized, government-sponsored monopolized market.

I support natural law, or universal law, or whatever they are called. Universal because they should apply to all societies, all countries, all culture -- no killing, no stealing, no abduction, no rape, etc. Most, as in 99% of all laws enacted by the legislature are what F. Hayek calls as "commands, not laws".

So the theme, "Are (contestable) markets moral?", a Yes answer is consistent with natural laws. People can do anything they want, sell and produce anything, buy and consume anything -- so long as they do not steal, they do not harm and kill, other people.
------ 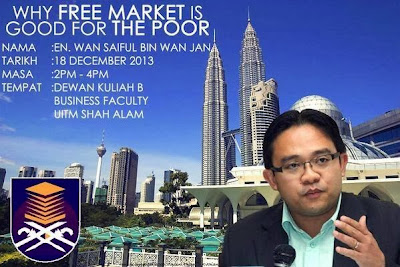 Last month, Wan was also invited to speak before some university students in Kuala Lumpur, "Why free market is good for the poor."

Yes, markets work for the poor because all markets are composed of individuals -- sellers and buyers, producers and consumers, men and women, old and young, rich and poor.

The first impediment to a free market economy is government. When people trade with each other across national borders, the conditionalities are very specific like quality, color, quantity, price discounts, volume, period of delivery, period of payment, etc. When government comes in, external conditionalities are imposed, like sanitary and phytosanitary measures, environmental standards (no whales or dolphins were hurt in your fish exports) come in out of nowhere, plus various taxes and fees to pay.

All monopolies and oligopolies in the country are created by the government. Initially via (a) Constitutional restriction to foreign competition, then directly via (b) legislative franchising. Then (c) other national agencies also create monopolies, like LTFRB create route monopoly for jeepneys only, aircon vans, buses are not allowed. Then (d) city or municipal governments can create monopolies for certain malls or supermarkets or gasoline stations. The local politicians can refuse giving a business permit to a new and competing mall or gas station, if there is an existing mall or gasoline station that is owned bythe family or close friends of the Mayor or some influential Councillors.
----------

Nice one Nonoy. As a side issue, there is the issue of 'conceptualising' rights. i.e. Some libertarians reject IP because they say you can't 'own an idea'. The folly of the Non-Aggression Principle (NAP) is that it tends to emphasis physical 'violence' rather than some conceptual provision for moral engagement.