In the new facebook group that I created and moderate, Government and Taxes, Liberty and Responsibility, a friend, Dr. Yolanda "Yolie" Robles (former Dean, UP College of Pharmacy, Director at the Philippine Pharmacists Association, PPhA), posted in early December last year. The exchanges that followed were nice. Posting the exchanges as is. I just added the diagram of the Hechscher-Ohlin Theorem (HOT) here, not part of the original exchanges.
----------

Yolanda Robles HI Nonoy. Thanks for adding me to the group. I just attended an AIM-KOICA event in Makati with the theme: Korea as a Partner of ASEAN, Furthering Cooperation for Enhanced Partnership and Common Prosperity through ODA. In this, the NEDA Representative gave a concise report on what the present government does in terms of poverty reduction and employment generation. Comments from the participants include: "the focus of employment generation is still on services, and which may require more college graduates rather than those with lower educational attainment. The greater number of poor and unemployed are those in the latter group. Why not also reinvigorate manufacturing which could employ more people of different educational attainments." Well, what's your say on this?

Nonoy Oplas Thanks Yolly. I am not sure if there is an existing Japan-ASEAN EPA (Econ. Partnership Agreement), sort of a soft Free Trade Agreement (FTA). So S. Korea should be initiating a Korea-ASEAN EPA too.

About the comment, I think it is a misconception that those in the services sector are mostly the college graduates. Not true. The services sector include (a) trading, wholesale and retail including ambulant and public market vendors; (b) Transpo, storage and communication which includes airlines, buses, jeepneys, taxi, shipping lines, pump boats for hire, etc.; (c) real estate, renting and business activities that include hotels, inns, lodging houses; (d) public administration including LGUs, and (e) other services like restos, karaoke bars, etc.

It is not good to dichotomize the economy as "manufacturing and agriculture are crucial, services are non- or less-productive". Food manufacturing will become hollow if there are no supermarkets, convenience stores, sari-sari stores (all under the service sector).

Yolanda Robles Thanks for your comment. I think the surplus college graduates take also jobs intended for high school and vocational graduates. That's why less jobs are less available to the latter group. The surplus of college graduates reflects the greater preference for white collar jobs, the mismatch between education and human resource needs, among others. As for trade agreements, there is such a thing as ASEAN + 3. The 3 refers to China, Japan and Korea which ASEAN countries have trade agreements with

Nonoy Oplas Yes, there is an ASEAN + 3, but it is only during the annual ASEAN summit, and not an EPA or FTA. So those 3 north Asian countries China, Japan, S. Korea initiate their own EPA or FTA with ASEAN as a bloc. Thus, a China-ASEAN FTA (I think to materialize by January 2015), a Japan-ASEAN EPA, and a S. Korea-ASEAN EPA/FTA. Since dealing with ASEAN as a bloc is more bureaucratic and more time consuming, some countries strike a bilateral EPA or FTA, that is why we have a Japan-Philippines EPA (JPEPA) and so on.

Yolanda Robles Yes, you are right. It was mentioned that Japan, South Korea, and China have country-specific agreements with some ASEAN countries and the current direction is to deal with ASEAN as a block

Nonoy Oplas Meanwhile, here is an old graph that I developed in a talk on free trade, Atlas-FNF conference in Kuala Lumpur in 2005. Trade protectionism penalizes consumers and protects local producers, that is why free trade is being pushed to remedy the price distortion caused by protectionism. 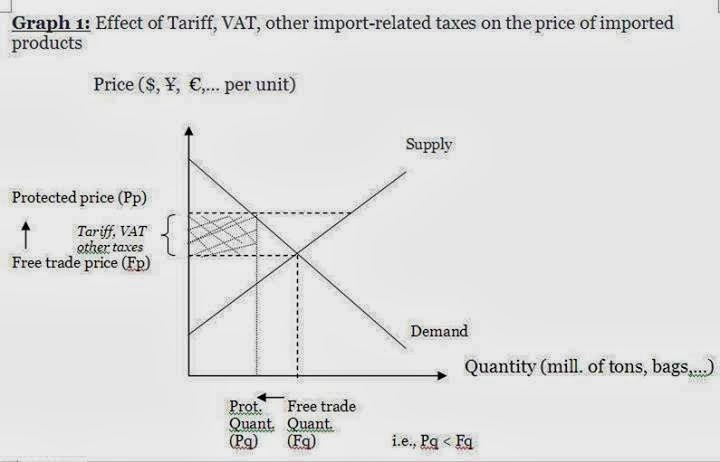 I saw Dr. Poch Macaranas of AIM this afternoon, he's the former Director of the AIM Policy Center. He said he is helping in the ASEAN FTA (AFTA), ASEAN Economic Community (AEC) and related issues, which should materialize by January 2015 (12 1/2 months from now) but has been moved to December 2015 or 2 years from now. I thanked him for that piece of info.

Being an advocate of free trade, I can only say that once trade is politicized and bureaucratized, instead of having free, unconditional trade between and among people, it becomes "trade with permission" from government.

Bonn Juego Noy, again, your kind of economics does not know how to create a wealthy nation in the PH context, how capitalism itself can lead to productivity explosions for the benefit of the entire economy. Good that NEDA understands the qualitative differences that different economic activities - manufacturing, agriculture, services - have for economic growth and the whole socioeconomic development process. My approach, of course, combines, among others, Marx, Schumpeter, and Keynes. As I said, I find yours more like the 'libertarianism' of Ayn Rand and the Koch Brothers, than the 'liberal' economics of Smith, Ricardo, Hayek, and Friedman who at least have a sense of moral philosophy. Anyway, greetings from stormy Scandinavia!
Nonoy Oplas Hi Bonn, of what use to society in manufacturing thousands of buses and jeepneys if there is no service sector that provides the actual transportation and mobility of people and cargo? Of what use to produce millions of chickens, pigs, etc. if there are no litson manok shops, restaurants, carinderia, supermarkets, talipapa, etc. (all are under the services sector)?


What I said above is that the services sector is an important part of wealth creation in the agri and industry sectors. Hope this is clearer now, cheers.

Bonn Juego Hi Noy! Quick one. My perspective does not believe in "comparative advantage" or specialisation in only one sector. As experienced by now developed countries, there has always been "synergy" among these sectors. It has been observed as key to the historical success of rich countries is the manufacturing industry. The demands from/for services, as well as agriculture, would come from a strong manufacturing productive base.

But remember it's not "manufacturing sector" per se that is the crux here, it's the dynamism of "increasing returns" that comes with a certain economic activity/sector.

Nonoy Oplas I think you misunderstand the concept of comparative advantage (CA). Take the Hecksher-Ohlin theorem of CA, among the workshorses of trade theory. It says that "a country will export the commodity that uses relatively intensively its relatively abundant factor of production." There is nothing in that theory or other CA theories that says CA is " specialisation in only one sector" as you suggested. A country,or even a person, can have multiple specialization at the same time. I have a physician friend who is a specialist in OB-Gyne, but also added specialization in cosmetics/aesthetics surgery, and can do emergency medicine too.http://funwithgovernment.blogspot.com/.../migration-and...

A country's abundance or lack of a certain factor of production can change through time. Thus, a capital-deficit country can soon become capital-surplus or capital-intensive country. 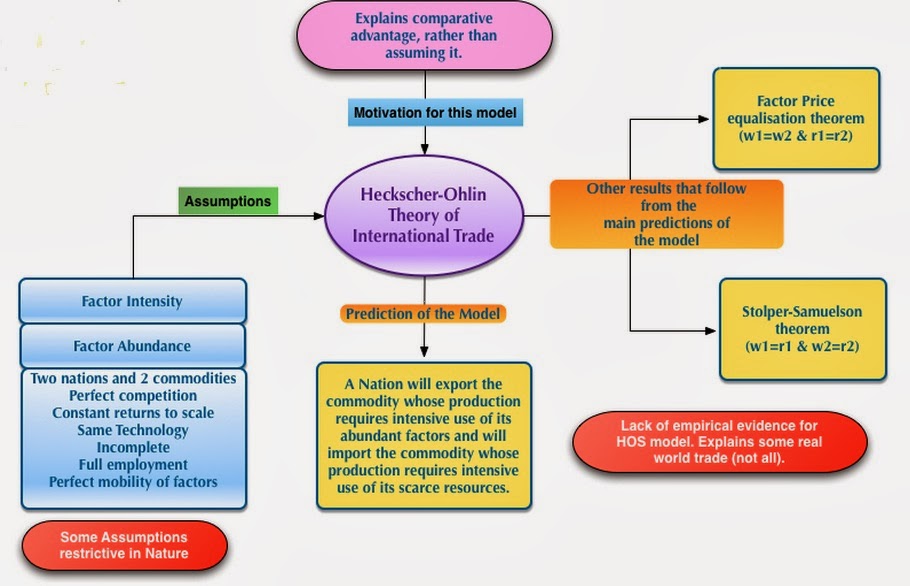 Government and Taxes: Migration and Freedom 16: Mobility and the Heckscher-Ohlin Theorem
funwithgovernment.blogspot.com
A discussion venue about the role (and misrule) of big government and high taxes. Also a second website of Minimal Government Thinkers, Inc.

Bonn Juego Ok, Noy, we agree on that that CA is not the secret to development success in history as well as for developing countries like the Philippines.

Ok, cleared and clarified, that you're not employing the simplistic Smithian and Ricardian CA trade theory based on labour theory of value on your earlier comment that: "It is not good to dichotomize the economy as 'manufacturing and agriculture are crucial, services are non- or less-productive'."

That you're not lumping together different economic activities -- mf, agri, services -- as if they are the same with the same impact on socioeconomic development. Good! Good! Good!

HOT is more sophisticated than Smith-Ricardo CA (based simply on bartering of labour hours) because it includes more factors of production and that it understands "diversity" in economic activities and as such offers a theory of "unequal" or "uneven" development. Akin to Rybczynski's theorem: when capital grows, output of capital-extensive commodity also grows while output of labour-intensive products contracts.

Based on HOT then, the PH will be much better off with a vibrant manufacturing sector, specialising in technological innovation-intensive economic activities which requires and/or results in a large division of labour. That is, let's specialise in economic activities with increasing returns, scale effects, innovation potential, and large division of labour. ('Advanced', technology-intensive SERVICES -- but NOT ALL services like your lechon manok services example -- can have increasing returns.) Unfortunately, this dynamism in the capitalist mode of production is not well captured in the seemingly static presentation of your graphs as if competitive advantages are solely based on differences in price levels, and not on innovation!

Come on, Noy, you're doing injustice to the great productive powers of the capitalist mode of production! Go back to your Marx, Schumpeter, and Keynes! Forget Ayn Rand and the Koch Brothers!

Nonoy Oplas I re-read my comments above, there was nothing there where I said, explicit or implicit, that we should neglect or relegate, manufacturing. Also, there was nothing there where I suggested that an economy should shy away from innovation. Rather, to emphasize that services sector can actually help pull the industry and manufacturing sector to grow faster. Thus, instead of producing 10 million tons of canned food, why not produce 20 or 100 million tons of canned food if there are plenty of supermarkets, convenience stores, sari-sari stores that are outlets for those manufactured goods.

Bonn Juego Great Noy - thanks for your time! More engaging learning discussion with you next time. Thanks to Yolanda for this space! Cheers!

Yolanda Robles What a clever, healthy and well-informed discussion. Luv it!