Among the key members and personalities within the Economic Freedom Network (EFN) Asia is Prof. Bibek Debroy, a famous free market economist at the Center for Policy Research, India. Below are some interesting quotes from him when he was interviewed in 2008 by EFN staff. 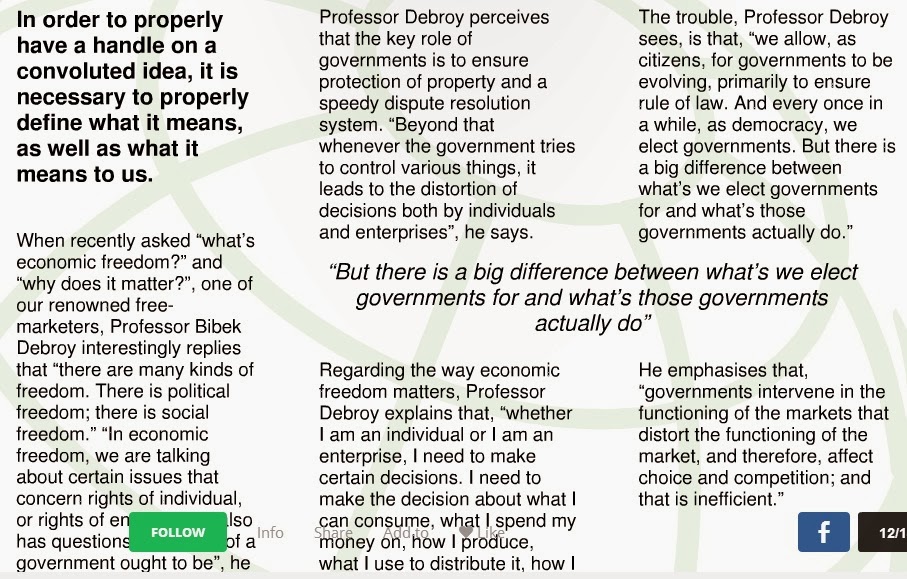 Amen, Bibek. He has been a friend of mine since September 2007 when I first met him here in Manila during the IPN-MG conference on innovation and public health. He was among the three speakers of high international exposure that day.

Below is a portion of his article, "Democracy vs. Socialism", published at the Economic Times, India. on September 04, 2010.


… Take the devolution agenda that any incoming coalition is bound to support. Most stuff one wants government to spend on is in social sectors. These are state, municipal or panchayat subjects.

Why not transfer funds directly to states, and lower down, scrapping the central sector and centrally-sponsored schemes? At best, there can be a menu of options the states can spend on….

Let all other devolution be formulae-based, without indicators for deprivation. Following the same line of argument, let forest and environmental clearances be decided by states. Let the ministry of environment and forests become irrelevant, except for international negotiations. Let there be decentralised identification of poor families and make the Planning Commission irrelevant.

Let’s make oil pricing market-determined. Policy paralysis and governance deficits, more important than current account and fiscal deficits, have been caused by Delhi. Let’s make Delhi irrelevant, even if the Seventh Schedule cannot immediately be amended. Friedrich Hayek correlated socialism and dictatorship. Though we are stuck with the Preamble, we can invoke democracy and demolish Delhi’s dictatorship….

Nor is foreign direct investment the key. If make Delhi irrelevant is one strand, make the world irrelevant is another. Let’s fix the domestic supplyside. Let’s reform agricultural markets and ensure inter-state movements of agricultural produce. If we fix the domestic problems, growth and investments will revive. So will manufacturing and exports.

This isn’t a pension, banking, insurance and Industrial Disputes Act agenda. Idon’t see why any incoming government should refuse to accept these two strands. All it requires is an acceptance of making itself less important and converting Centre-state (which is not an expression in the Constitution) to Union-state (which is one). Democracy, thus defined, is the best antidote to the dictatorship of socialism inflicted on us."