The anthropogenic or "man-made" warming/CC camp  is generally a parochial and  short-time reference hypothesis. I say parochial because they only focus and blame carbon dioxide (CO2) as climate driver and generally don't mention or discuss other natural contributors to climate forcing like the Sun, galactic cosmic rays (GCRs), water vapor, Pacific decadal oscillation (PDO) and Atlantic multidecadal oscillation (AMO), volcanoes, etc, And I say "short-time" reference because they generally look back over the past 160 years only, in  the mid 1800s which coincided with the end of the little ice age (LIA) and started a new cycle of past century's warming.

There is another good scientific paper posted in WUWT yesterday, Vostok and the 8000 year time lag by Euan Mearns. I am reposting portions of that paper including the concluding notes. The author's data covering nearly 450,000 years showed long-term warming-cooling-warming-cooling cycles. Yes, global warming did happen hundreds of thousand years ago when there was not even bicycles or telephones.


In comparing the temperature, CO2 and CH4 signals in the Vostok ice core, it is important to understand that the temperature signal is carried by hydrogen : deuterium isotope abundance in the water that makes the ice whilst the CO2 and CH4 signals are carried by air bubbles trapped in the ice. The air bubbles trapped by ice are always deemed to be younger than the ice owing to the time lag between snow falling and it being compacted to form ice. In Vostok, the time lag between snow falling and ice trapping air varies between 2000 and 6500 years.

Note that in all my charts time is passing from right to left with the “present day” to the left. The present day (year zero) is deemed to be 1995, the year that the cores were drilled. The GT4 time scale of Petit et al is used. 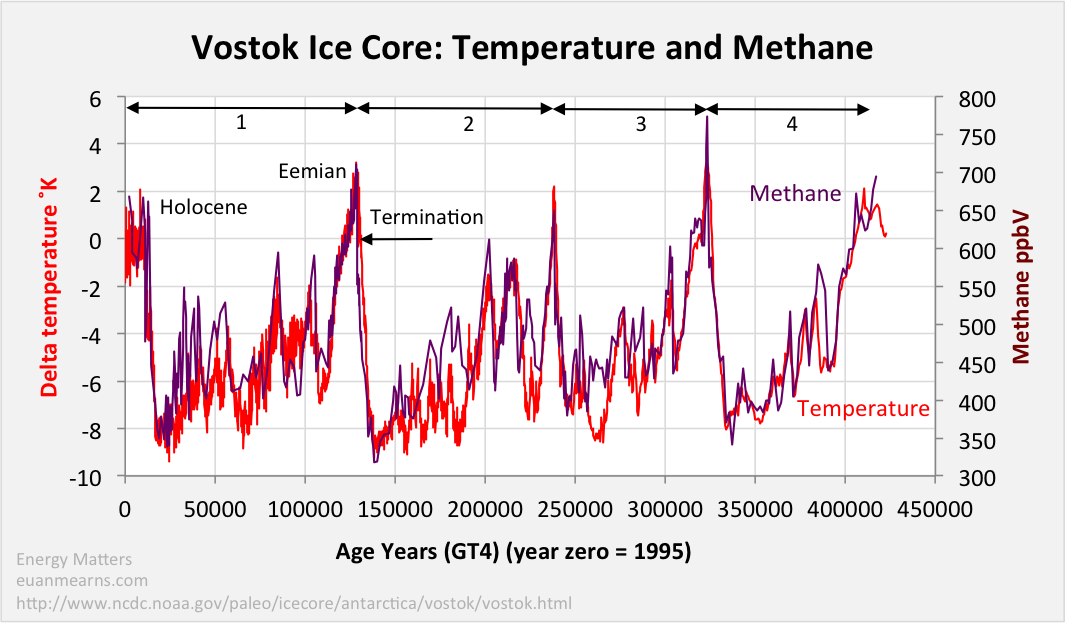 This shows that the ice age to gas age calibration is good. But does it show that methane variations of ±200 ppbV (parts per billion) are amplifying the orbital control of glaciations?

The fit of CO2 to temperature is actually not nearly so tight as for CH4. There is a persistent tendency for CO2 to lag temperature throughout and this time lag is most pronounced at the onset of each glacial cycle “where CO2 lags temperature by several thousand years”.

CO2 and temperature appear well-correlated in a gross sense but there are some significant deviations. At the terminations, the alignment is as good as observed for methane. But upon descent into the following glaciation there is a time lag between CO2 and temperature of several thousand years. Petit et al [1] make the observation but fail to offer an explanation and to take the significance into account preferring to make instead unsupportable claims about CO2 and CH4 amplifying orbital forcing. 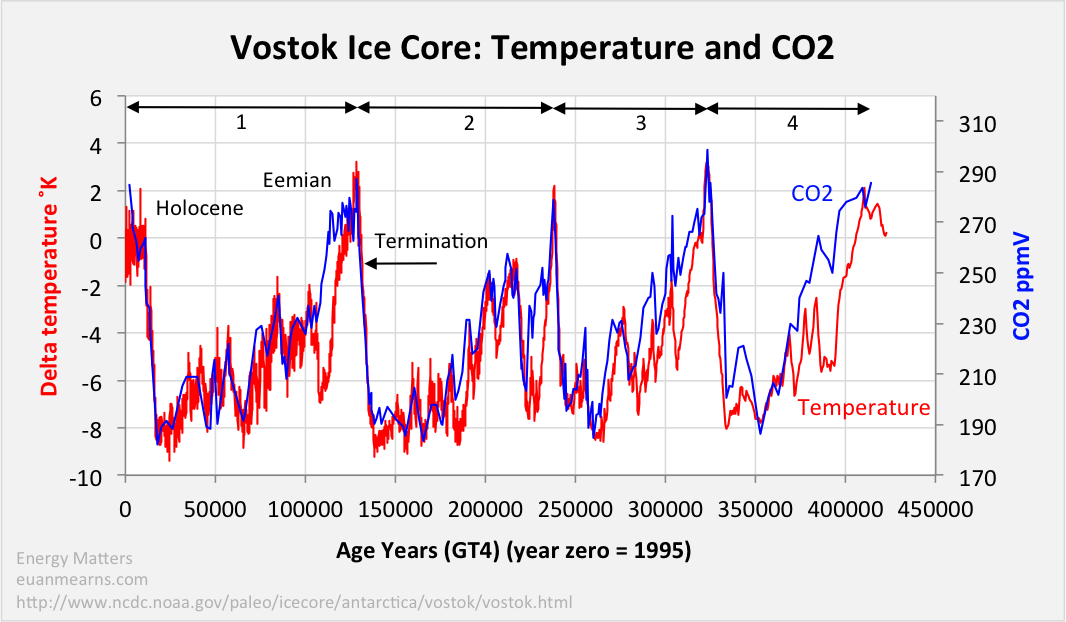 CO2 lags methane in a manner similar to the lag between CO2 and temperature. This time lag requires an explanation rooted in the geochemical environments that are both emitting and sequestering these gases. Petit et al [1] devote surprisingly little space to explaining the physical processes behind the CO2 and methane variations at all. 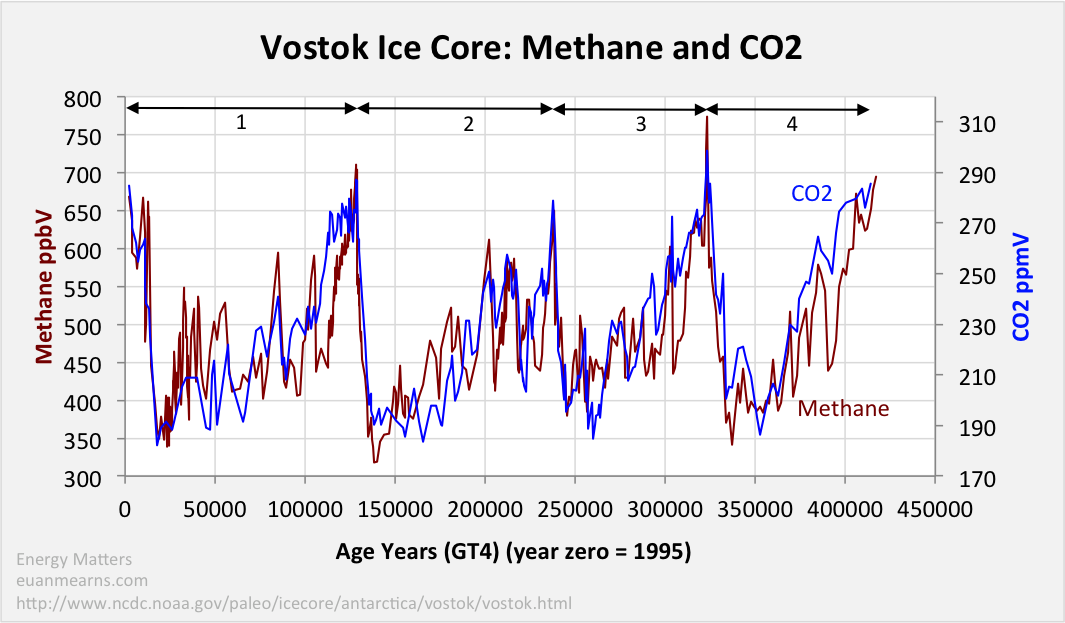 So what may actually be going on? A few months ago Roger and I had a series of posts on Earth’s carbon cycle. We never really got to the bottom of it but in the process learned a lot and turned up much interesting data.  I made three interim conclusions 1) deep ocean water contains much more carbon than the surface, and because of this 2) the much publicised oceanic CO2 solubility pump cannot exist and 3) most CO2 is removed from the atmosphere by photosynthesis – trees on land and phytoplankton in the oceans [4]. This may help us to understand the CO2 time lag. The deep oceans contain vast amounts of carbon, the product of rotting plankton at depth, and when the oceans warm or overturn, this C can be released to the atmosphere, quickly. But the return trip is not so simple since this depends on photosynthetic rates. In short, it seems that the oceans can exhale CO2 much more easily than it can be inhaled again.

On land, the re-creation of northern hemisphere ice sheets will kill high latitude forests and cause global migration of climatic belt boundaries towards the equator. Killing forests reduces the size of the terrestrial CO2 pump whilst simultaneously adding a source of CO2 – rotting wood. This will tend to offset the oceanic biosphere’s ability to pump CO2 down during the cooling phase.

* Over four glacial cycles CO2, CH4 and temperature display cyclical co-variation. This has been used by the climate science community as evidence for amplification of orbital forcing via greenhouse gas feedbacks.

* I am not the first to observe that CO2 lags temperature in Vostok [2] and indeed Petit et al [1] make the observation that at the onset of glaciation CO2 lags temperature by several thousand years. But they fail to discuss this and the fairly profound implications it has.

* At the onset of the last glaciation the time lag was 8,000 years and the world was cast into the depths of an ice age with CO2 variance evidently contributing little to the large fall in temperature.

* The only conclusion possible from Vostok is that variations in CO2 and CH4 are both caused by global temperature change and freeze thaw cycles at high latitudes. These natural geochemical cycles makes it inevitable that CO2 and CH4 will correlate with temperature. It is therefore totally invalid to use this relationship as evidence for CO2 forcing of climate, especially since during the onset of glaciations, there is no correlation at all.
--------------