Last Thursday, I went to De La Salle University (DLSU) main campus in  Manila to speak at a class on Development Studies, handled by my wife.

I put here the IPN logo because looking back, IPN  has greatly helped our think tank in guiding us to some policy discussions and advocacies, plus giving us some modest donations. Recognizing their support to us. 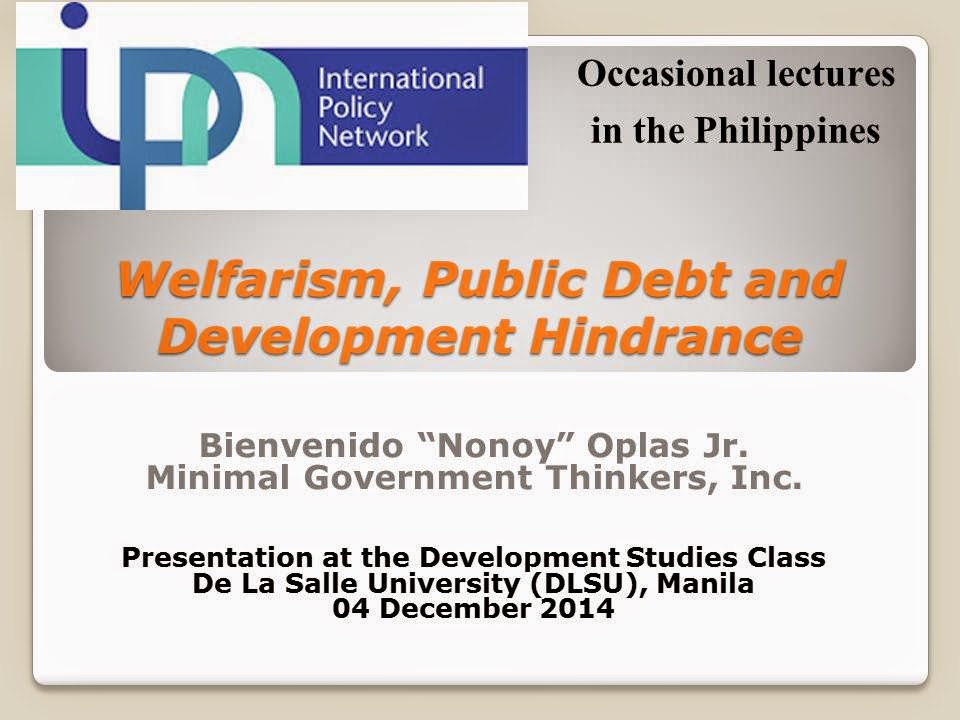 Welfarism in my presentation is defined as the political and social belief that individual and parental responsibility should be subsumed or substituted by more government responsibility in improving people’s welfare. So, from education to healthcare, from unemployment allowance to  food stamps, from housing to train fare, from seeds to agri credit, an endless program of subsidies, all financed via high taxes/fees/fines/penalties and endless borrowings.

Welfarism therefore, is giving more powers to governments and their  officials,  elected and appointed. Giving them more spending power and taxation power. Below, an illustration. 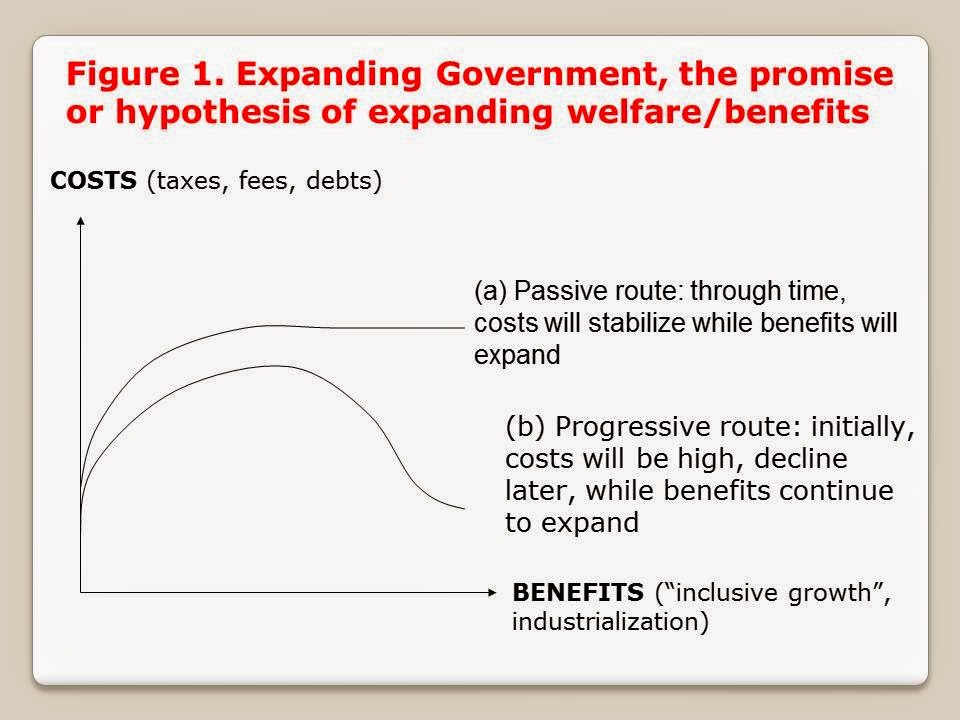 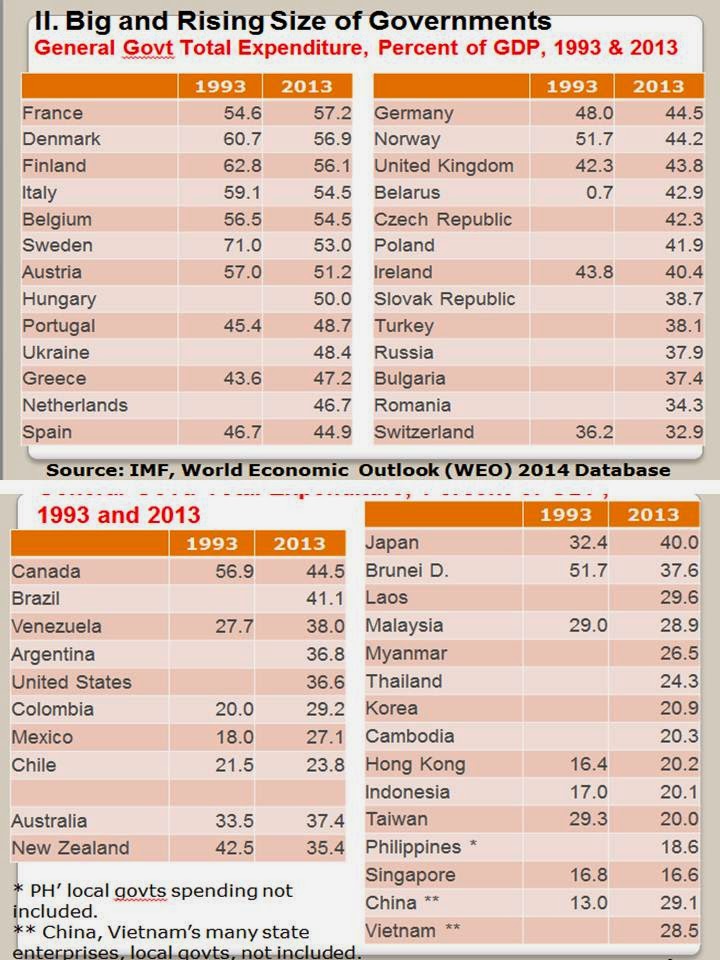 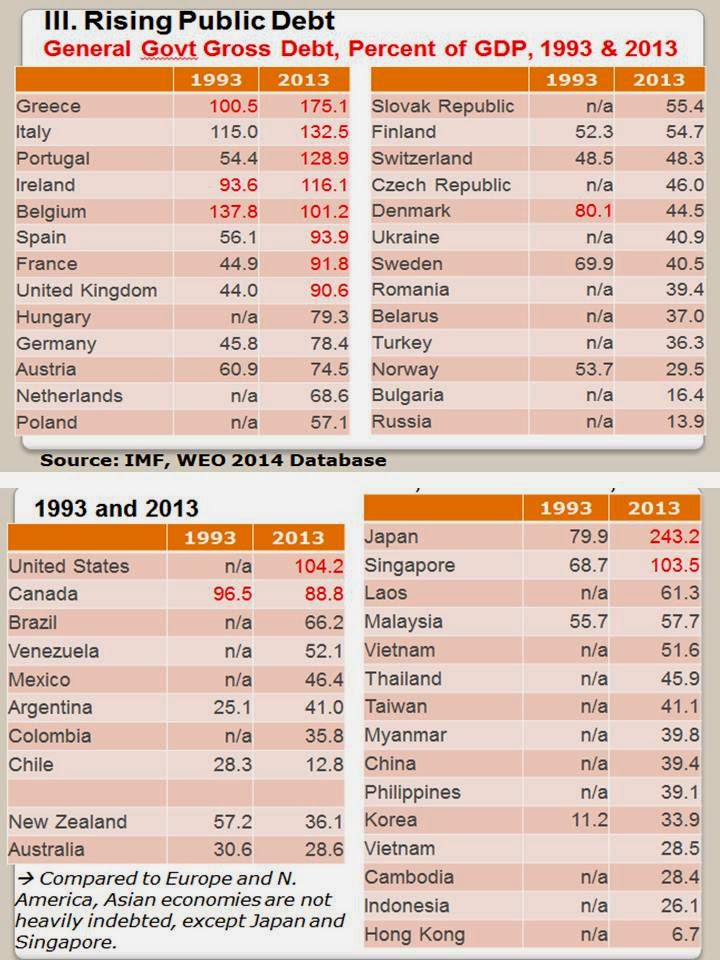 Some data on the Philippine government's public debt was also shown. Another illustration below. 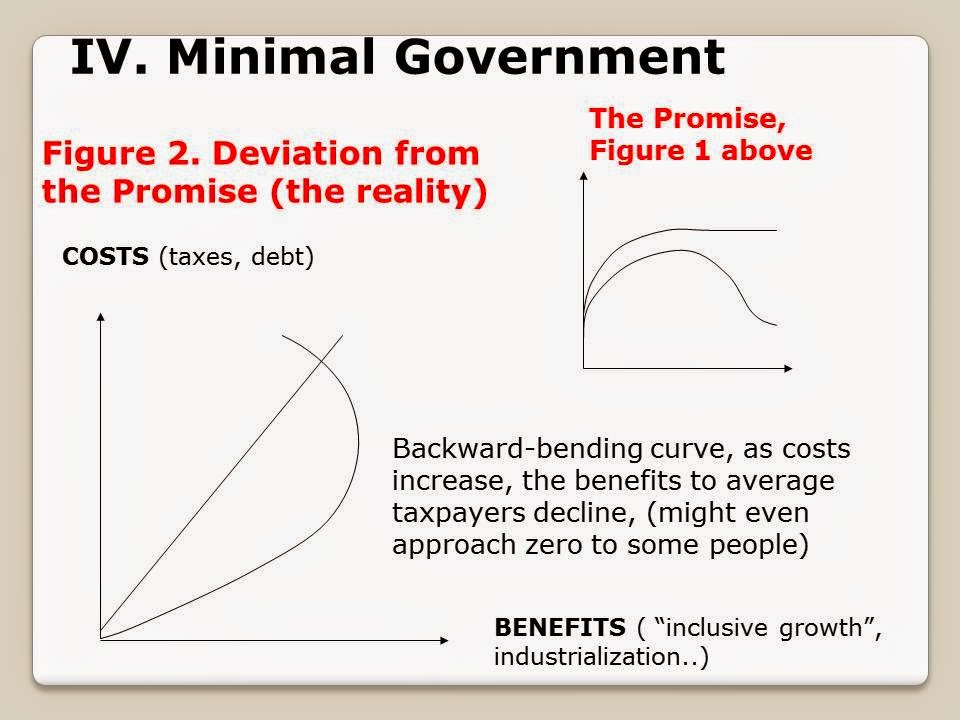 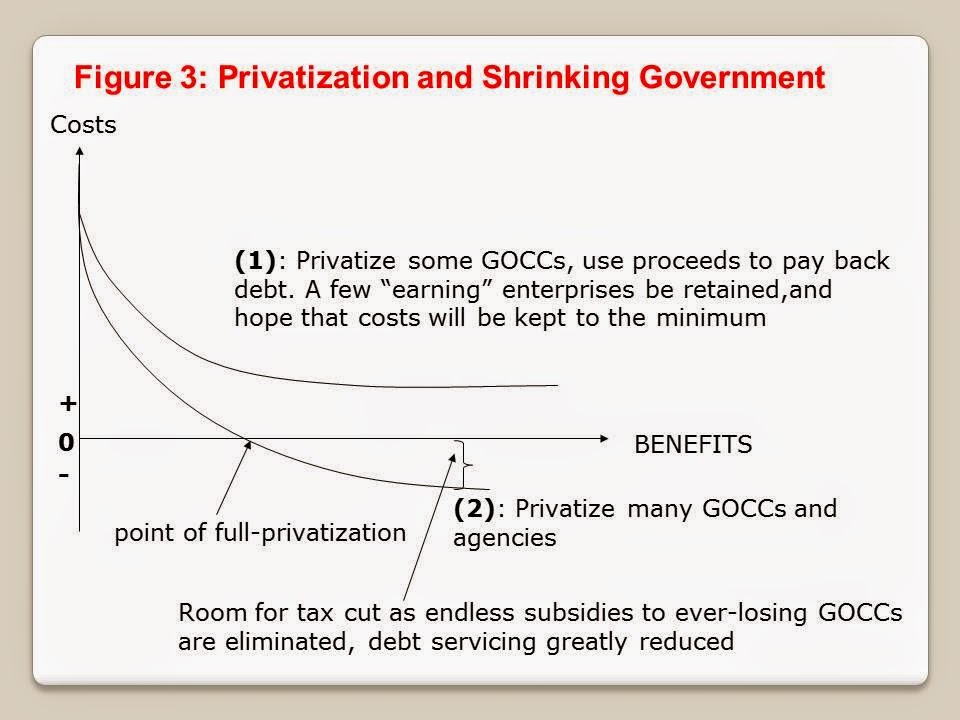 oncluding notes, plus some photos taken by Lee, one of the students who introduced me to the class. Thanks Lee. 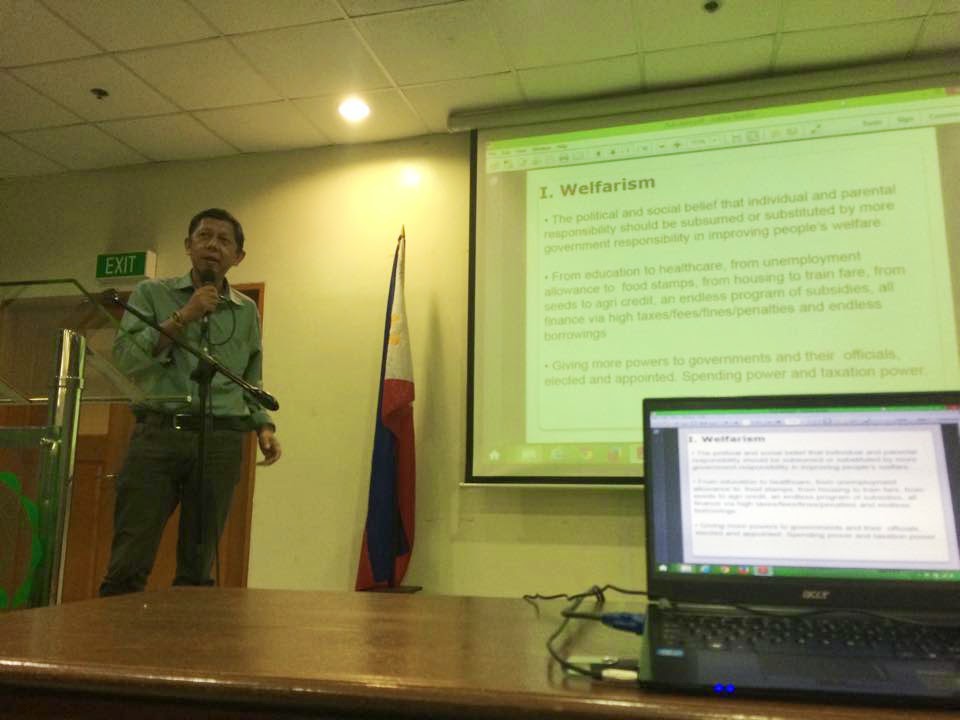 1. Welfarism and populism is wrong. Individual and parental/ guardian responsibility should not be subsumed by more government responsibility.

2. Welfarism results in corruption of the people’s values, creates more state dependency and sense of entitlement. The income and investments of hard working people are not entirely theirs, other people are “entitled” to  get a big portion  of it.

4. Existing taxes, fees, fines are no longer sufficient to sustain huge spending by governments. Endless borrowing is  the norm.

5. Almost all governments around the world are indebted, they vary only in the extent of indebtedness. The more welfarist and populist the government, the more  indebted it is. 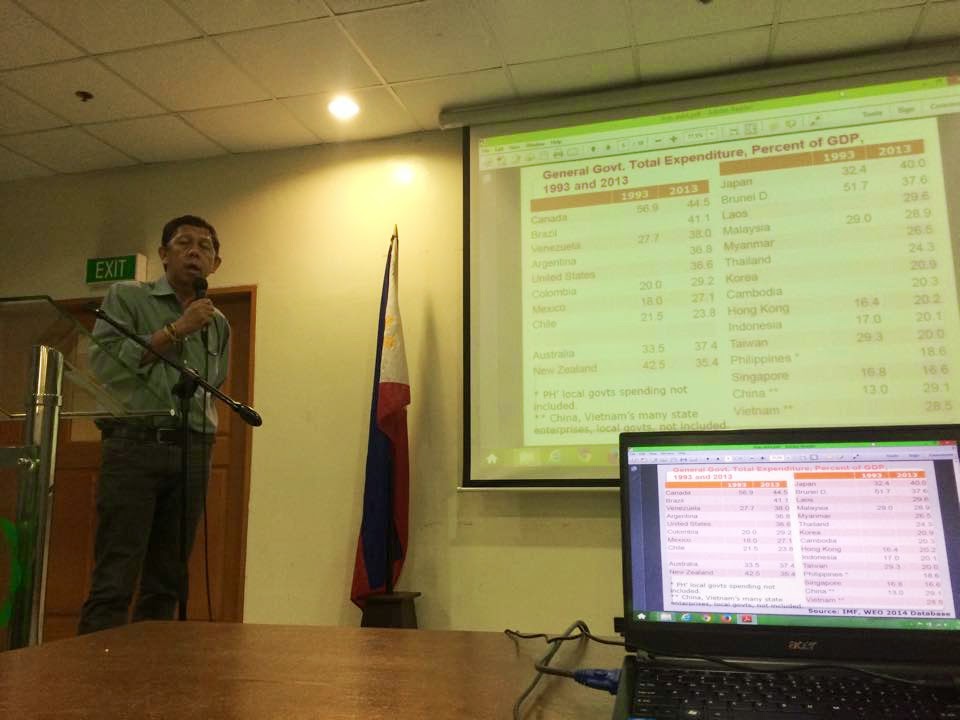 7. But  when there are no clear emergencies, governments should have balance budget at least, fiscal surplus if possible and pay back some debt. This is not happening, in most governments worldwide.

8. Fiscal responsibility, governments should learn to live within their means, do not engage in endless borrowings, do not mortgage the future of the next generations.

9. But we must not renege those debt payment, pay them all. The hugeness of the debt and its interest payment is a constant reminder to the current and future administrations that endless borrowing is wrong.

10. Reduce taxes especially personal and corporate income tax, leading to zero income tax. Governments have many other taxes and fees to collect, have many assets to privatize.

11. The promise and hypothesis of “expanding government leads to expanded  welfare” is hardly happening. In most cases, the opposite happens, backward-bending case of diswelfare as government  size keeps expanding.
-----------