One reason why the ecological movement is persistent on "man-made warming/CC" is because they are targeting amount of money, hundreds of billions of dollars per year, not per decade or one time payment. See various reports below.

Hey taxpayers of rich countries, will you remain rich if this large-scale extortion is implemented via the UN and other multilateral bodies (WB, ADB, IMF, etc.)? 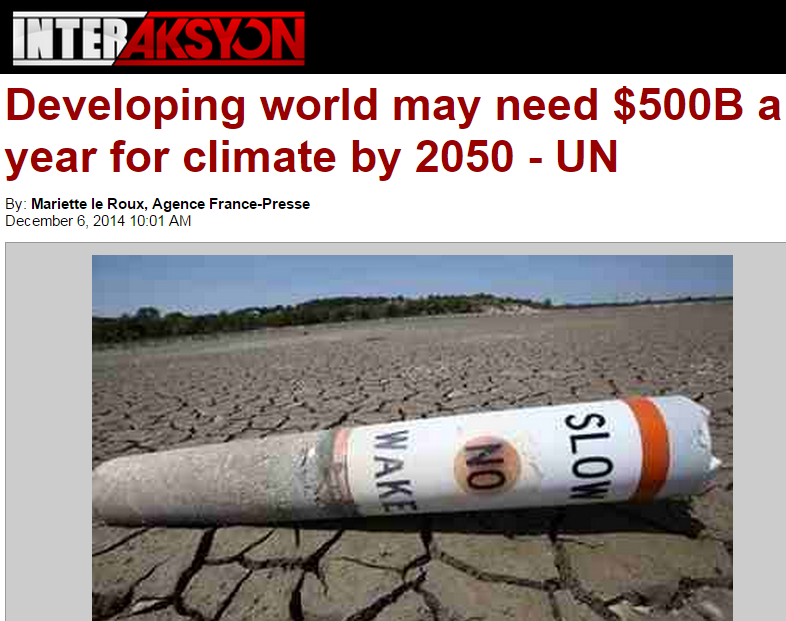 Developing countries may need up to $500 billion per year by 2050 to adapt to the ravages of climate change, dwarfing previous estimates, a UN report said Friday.

The figure was about 20 times today's public spending on climate adaptation, according to the United Nations Environmental Program (UNEP) that warned of a "significant funding gap after 2020."

In 2012-13, the amount of global public finance committed to adaptation was about $23-26 billion, of which 90 percent went to developing countries.

(IPCC) has projected adaptation costs in developing countries to reach $70-100 billion per year by 2050, based largely on World Bank figures from 2010.

And on some calculations, based on national-level rather than global-level studies, "adaptation costs could climb as high as $150 billion by 2025/2030 and $250-500 billion per year by 2050" -- and double that if the global average temperature rise is allowed to approach 4 C.

Ooppss, the climate and environmental socialism movement is not happy with $500 B a year extortion. Some guys there want higher, like $90 trillion over 15 years or $6 T a year. 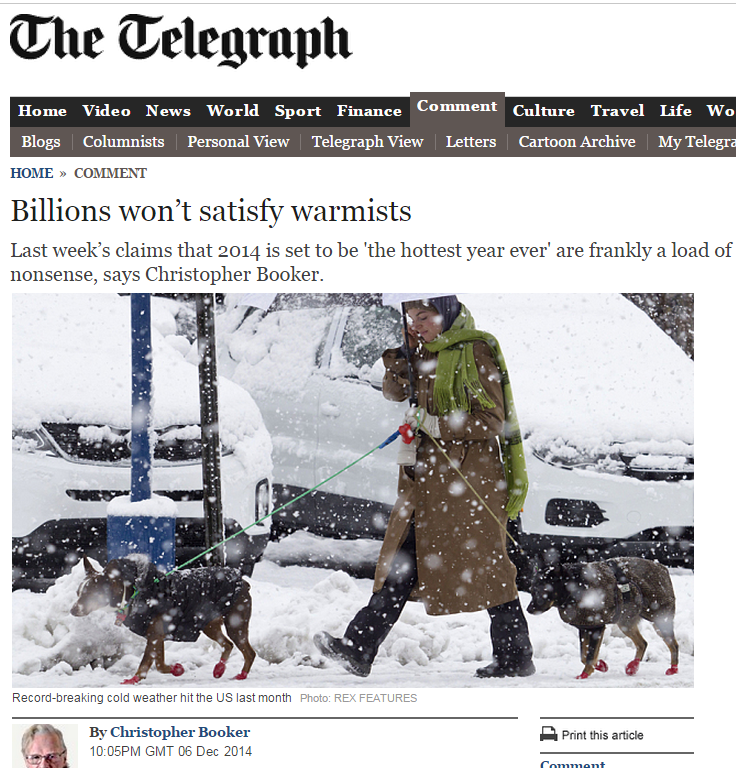 it was again proposed in Lima that richer nations should pay poor countries $100 billion a year to protect them from runaway global warming, the UN’s chief spokesman, Christiana Figueres, dismissed this as “a very, very small sum”. What is needed to decarbonise the global economy, she said, is “$90 trillion over the next 15 years”. It makes the £1.3 trillion we Brits are committed by the Climate Change Act to pay to halt global warming within 36 years look like chicken feed. 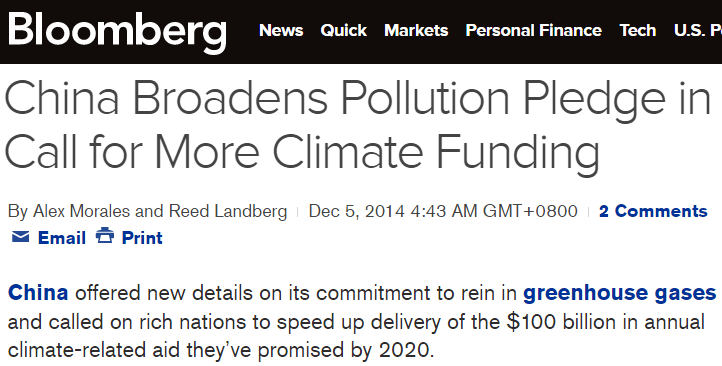 Su was critical of the progress industrialized nations have made to boost climate-related aid to $100 billion a year by 2020. The Green Climate Fund, a UN institution meant to channel an unspecified portion of that aid to developing nations, has pledges for about $9.7 billion so far." 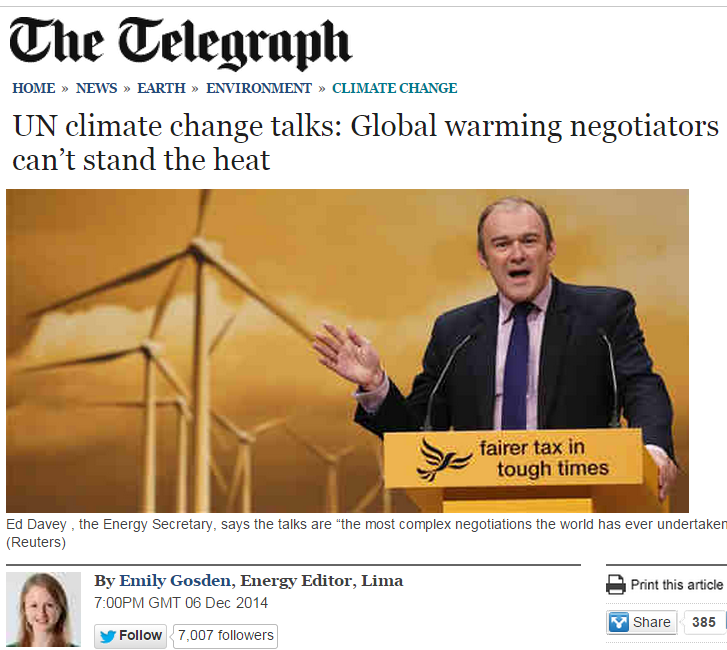 Developed nations have so far pledged almost $10bn (£6.4bn) of public funds – including £720m from the UK – to a new UN “Green Climate Fund” (GCF) to help developing nations.

China, which aligns itself with many of the poorest countries, has complained the total so far falls far short of a 2009 pledge by developed nations to mobilise $100bn-a-year of “climate finance” by 2020. “$10 billion is just one 10th of that objective,” Su Wei, China’s lead negotiator said, Bloomberg reported.

But Elina Bardram, head of the EU’s delegation dismissed the claim, insisting the $100bn was always intended to be mixture of public and private finance. The GCF was “by no means the only vehicle for delivering the $100bn,” she told reporters on Friday. 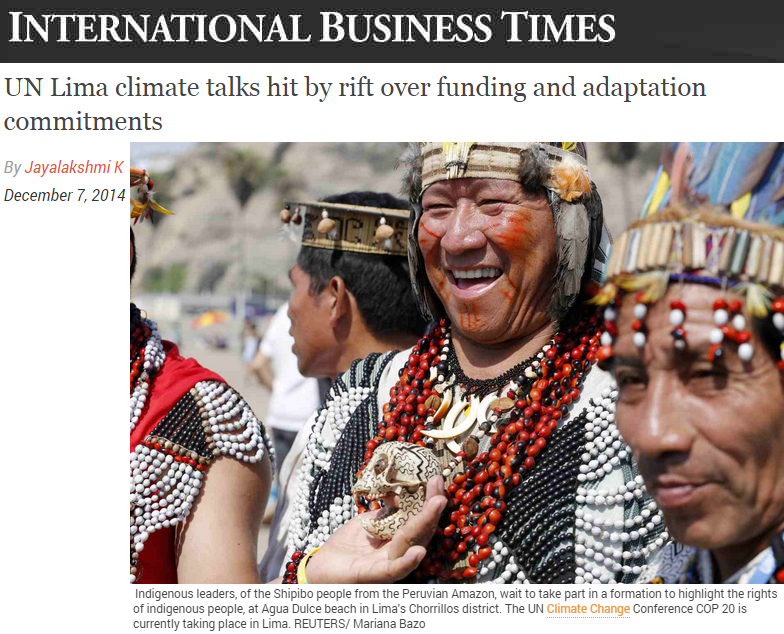 Hmmmm, the higher the extortion money being demanded from rich countries, the bigger will the climate lies ahead.

Meanwhile, our planet's fever keeps rising, we are sweltering and burning as more CO2 is released in the atmosphere. :-)

From WUWT, Onward marches the Great Pause, by Christopher Moncton of Benchley, December 3, 2014.