Another compilation of news reports and charts here, about the costly and unreliable electricity from renewables despite all the subsidies. 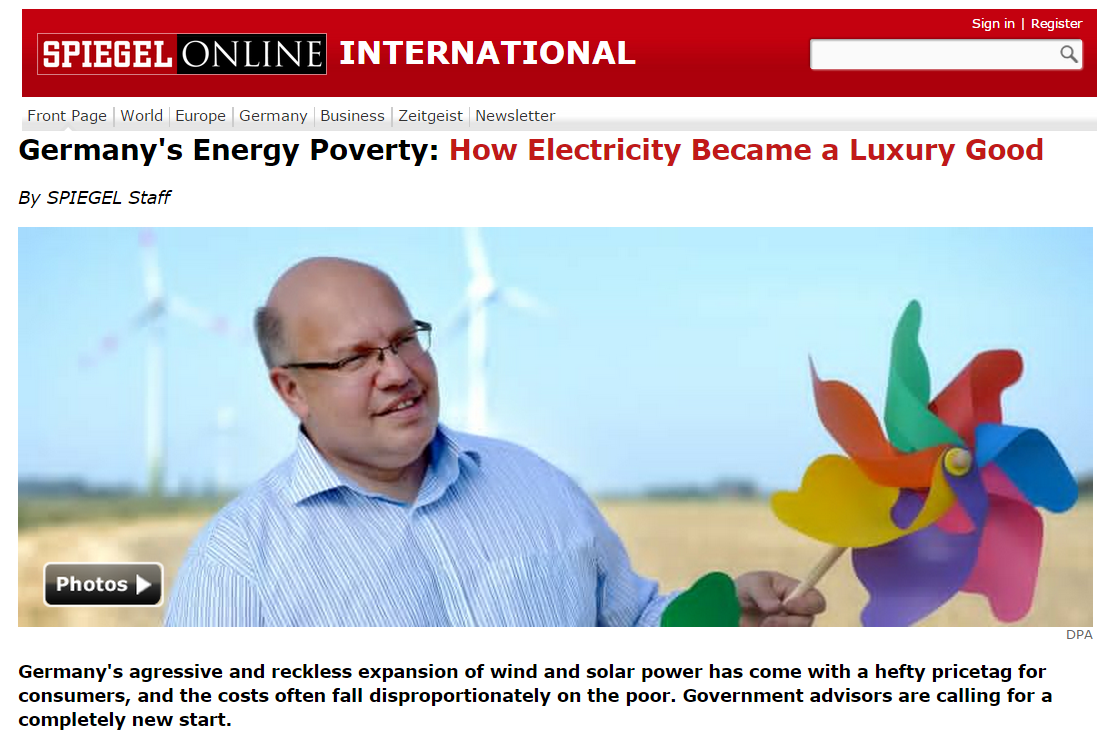 Altmaier and others are on a mission to help people save money on their electricity bills, because they're about to receive some bad news. The government predicts that the renewable energy surcharge added to every consumer's electricity bill will increase from 5.3 cents today to between 6.2 and 6.5 cents per kilowatt hour -- a 20-percent price hike.

German consumers already pay the highest electricity prices in Europe. But because the government is failing to get the costs of its new energypolicy under control, rising prices are already on the horizon. Electricity is becoming a luxury good in Germany, and one of the country's most important future-oriented projects is acutely at risk.

Even well-informed citizens can no longer keep track of all the additional costs being imposed on them. According to government sources, the surcharge to finance the power grids will increase by 0.2 to 0.4 cents per kilowatt hour next year. On top of that, consumers pay a host of taxes, surcharges and fees that would make any consumer's head spin.

"On Thursday, a government-sanctioned commission plans to submit a special report called "Competition in Times of the Energy Transition." The report is sharply critical, arguing that Germany's current system actually rewards the most inefficient plants, doesn't contribute to protecting the climate, jeopardizes the energy supply and puts the poor at a disadvantage.

The experts propose changing the system to resemble a model long successful in Sweden. If implemented, it would eliminate the more than 4,000 different subsidies currently in place. Instead of bureaucrats setting green energy prices, they would be allowed to develop indepedently on a separate market...

Becker wants to prevent his clients from having their electricity shut off for not paying their bill. After sending out a few warning notices, the power company typically sends someone to the apartment to shut off the power -- leaving the customers with no functioning refrigerator, stove or bathroom fan. Unless they happen to have a camping stove, they can't even boil water for a cup of tea. It's like living in the Stone Age. 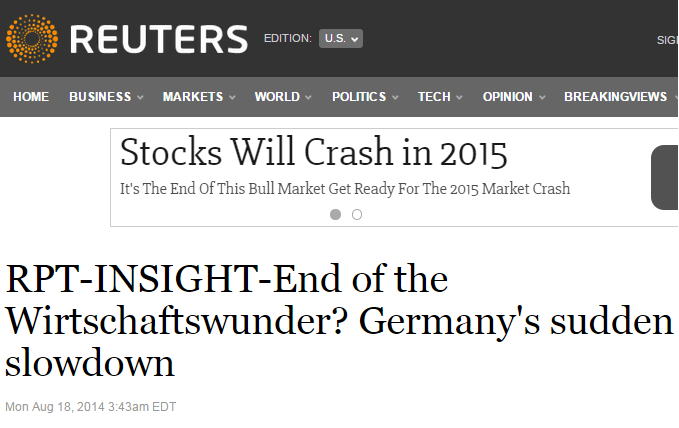 Energy intensive industries in particular have lost confidence in the future of Germany as a business location," said Thomas Mayer, a former chief economist at Deutsche Bank who now runs the Cologne-based Flossbach von Storch Research Institute. "I think this is a major issue that will burden German industry for years to come.

Good chart, Renewables' rated capacity vs. actual energy output, cases of the US, UK and Germany, 2008 to 2013. Huge gap between the promise (rated cap) and reality. 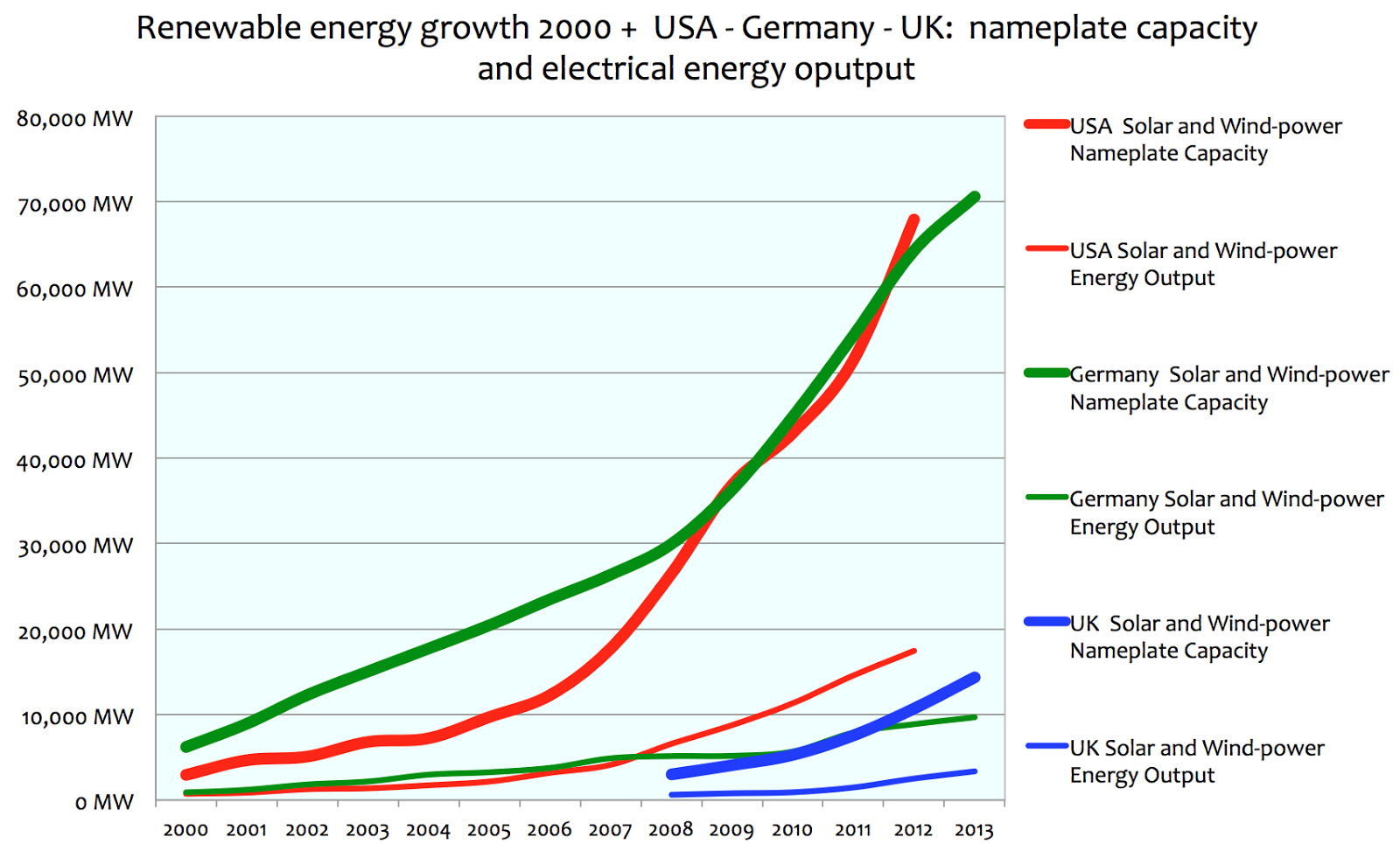 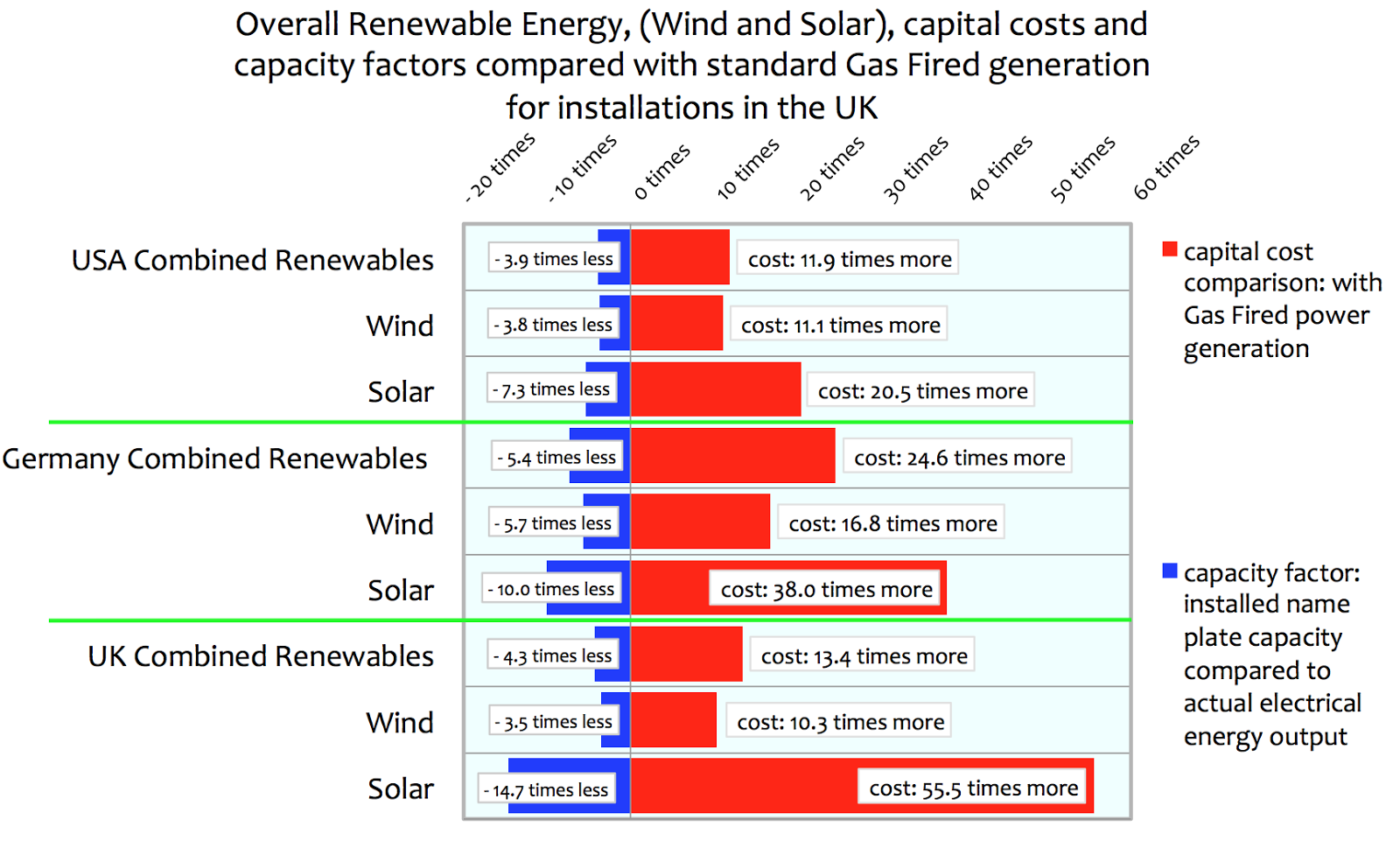 The inefficiency of intermittent sources like wind and solar in Germany can be offset by the efficiency of nuke in France and coal in Poland, thus Germany won't have brown outs. What the renewable fanatics in Germany (and abroad) forgot is that if they shut down their nuke or coal, then Germany will buy power from France, which is largely nuke power. Or buy from Poland, which has huge coal power. Same banana.

See this chart for instance. Germany needs up to 75 GW power on certain hours of the day, but solar + wind can supply a max of 25 GW. On other hours, solar + wind power is... zero, the wind doesnt blow, the Sun doesn't shine. Subsidize renewables more. 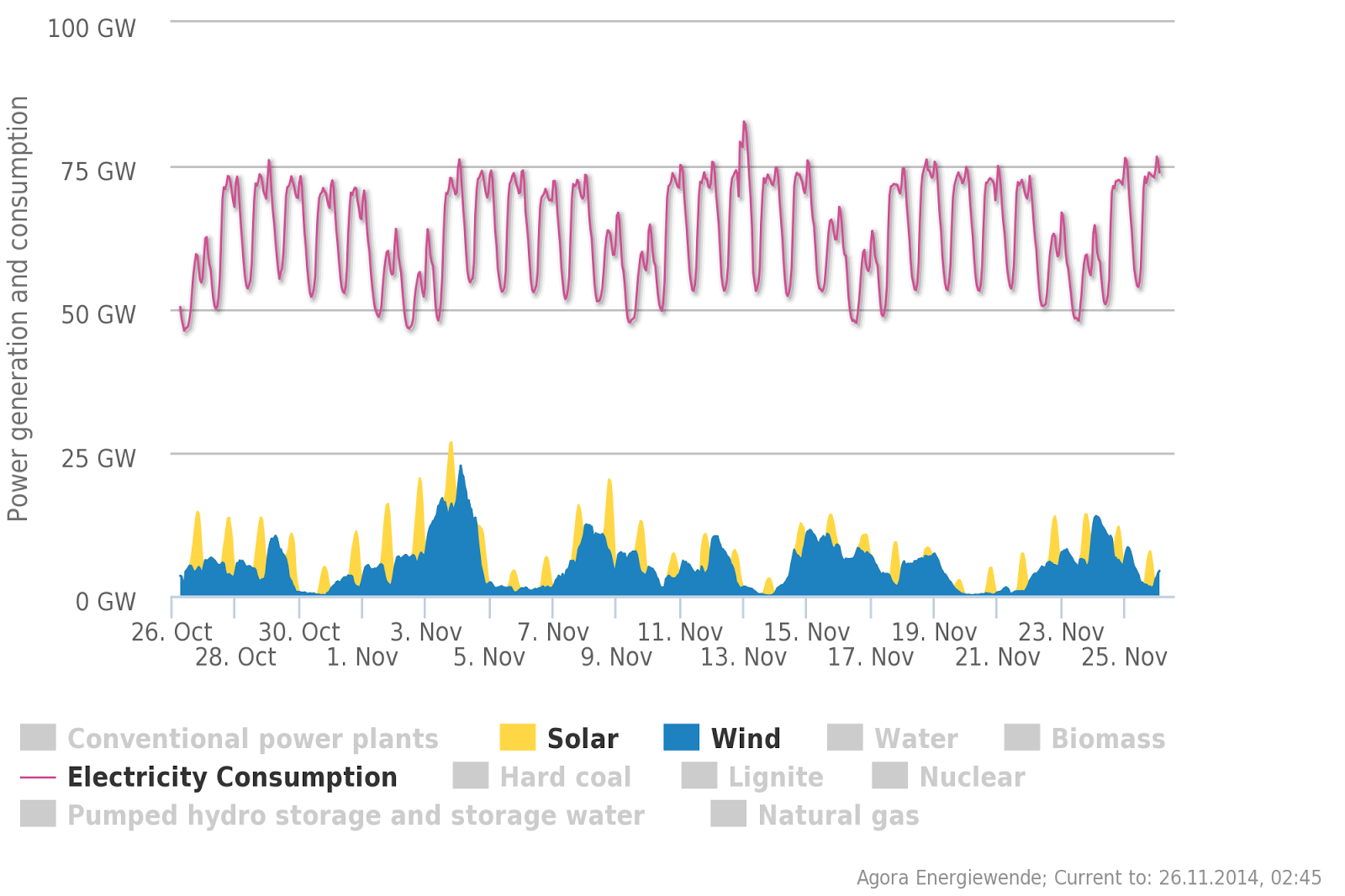 (5) From NTZ,
Price of power for all EU countries. cents/kWh, 2013. Denmark has the most expensive, Germany (Deutschland) is second.
http://notrickszone.com/2014/12/07/germanys-electricity-price-more-than-doubles-electrocuting-consumers-and-markets/ 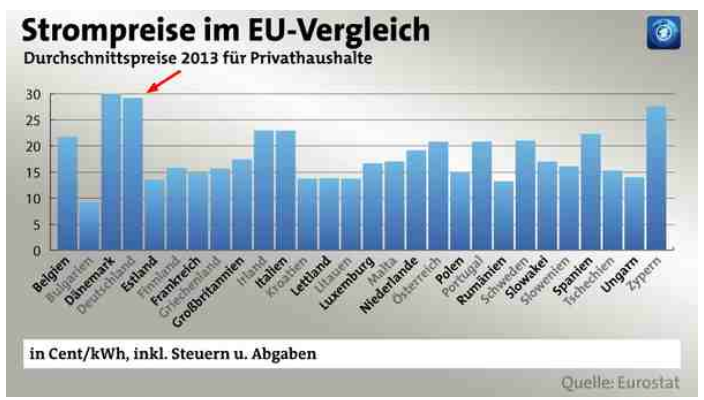 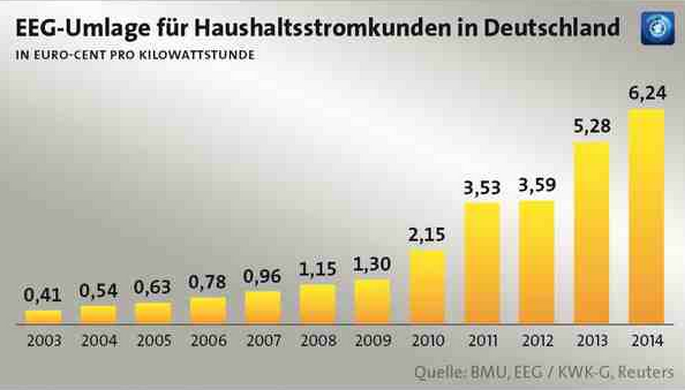 the silverback of the “big four” German energy producers who group the bulk of the country’s conventional and nuclear power production is about to close shop at short notice. The others will probably follow suit.

...both the minister for economic affairs and the chancellor’s office hastily preparing new legislation aiming at enhancing the situation of coal-fired plants by implementing an all-new market design. It will most certainly provide for compensation payments for coal-fired plants forced to turn idle or at minimum load when the grid is clogged by an oversupply of wind and solar energy.

German electric energy prices, already the second-highest in Europe, are increasingly choking off economic growth. More and more key sectors such as the aluminum, steel making and chemical industry are increasingly opting out of investing in the country, turning to regions offering more reasonable energy prices, notably the US.... 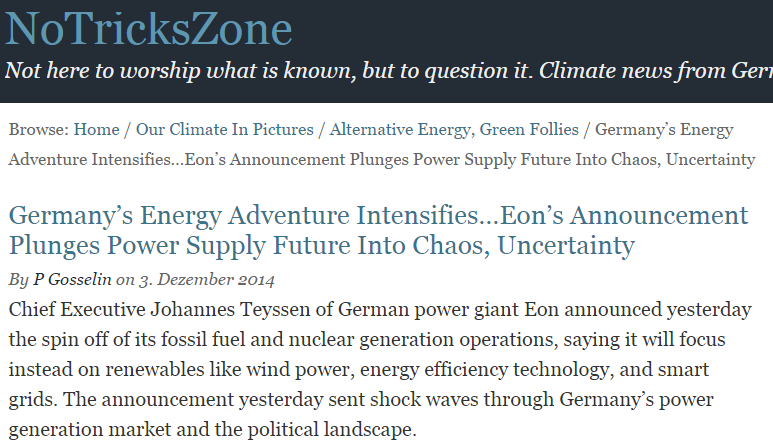 Holger Steltzner at Germany’s flagship Frankfurter Allgemeine Zeitung writes that the Eon move presents the German government with 2 major problems: “It has to make sure that the decommissioning of the nuclear power plants succeeds, and it must explain where the power will come from when the wind doesn’t blow.”

With 23 billion euros annually, the government subsidizes renewable energy that is worth only 2 billion on the market.

(8) From Business Recorder December 5, 2014.
Coal, not wind or solar, is Germany's electricity backbone. Coal generation is still the backbone of German power supply in a country set on moving away from nuclear power and favouring renewable energy over fossil fuels. The country in January to September used hard coal for 43 percent of coal generation, of which 17 percent was hard coal and 26 percent domestic brown coal, industry statistics showed. 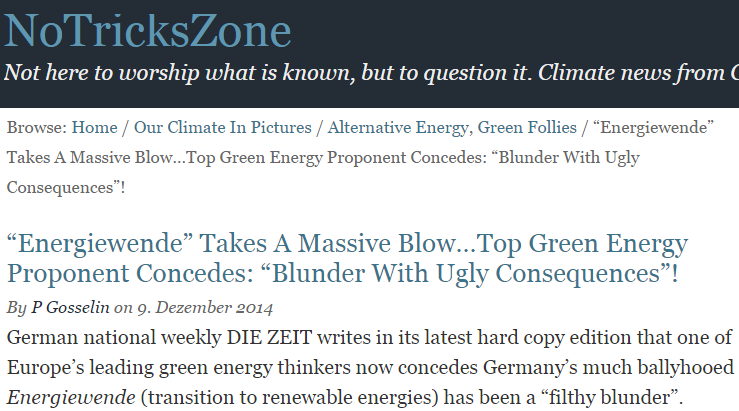 DIE ZEIT, an influential publication among Germany’s green centre-left, writes, “Germany will not even come close to reaching its climate target despite the massive investment in wind and solar energies....

It’s a blunder with ugly consequences. The Energiewende, as it is now set up, is not making the air cleaner, but dirtier.

Dozens of protest groups have sprung up over the past year along the 500-mile path of the project, SuedLink, one of four high-voltage direct current lines that are to carry wind-generated power from north to south.

The lines are described as essential to the success of the country’s pivot away from nuclear and coal power and toward mostly renewable energy. But nearly a year into the plans, the SuedLink project has set off an outbreak of not-in-my-backyard syndrome that threatens to disrupt a linchpin of Germany’s commitment to a lower-carbon future.

Finally, here is the actual electricity production in Germany from November 1-30, 2014 (above) then December 1-30, 2014 (below). Dark blue is fossil/coal and nuke; medium blue is wind, yellow is solar, green is biomass. When the wind does not blow, when the Sun does not shine, electricity output is zero. It is really the "non-renewables" that give stable and reliable electricity to Germany and all other countries in the planet. 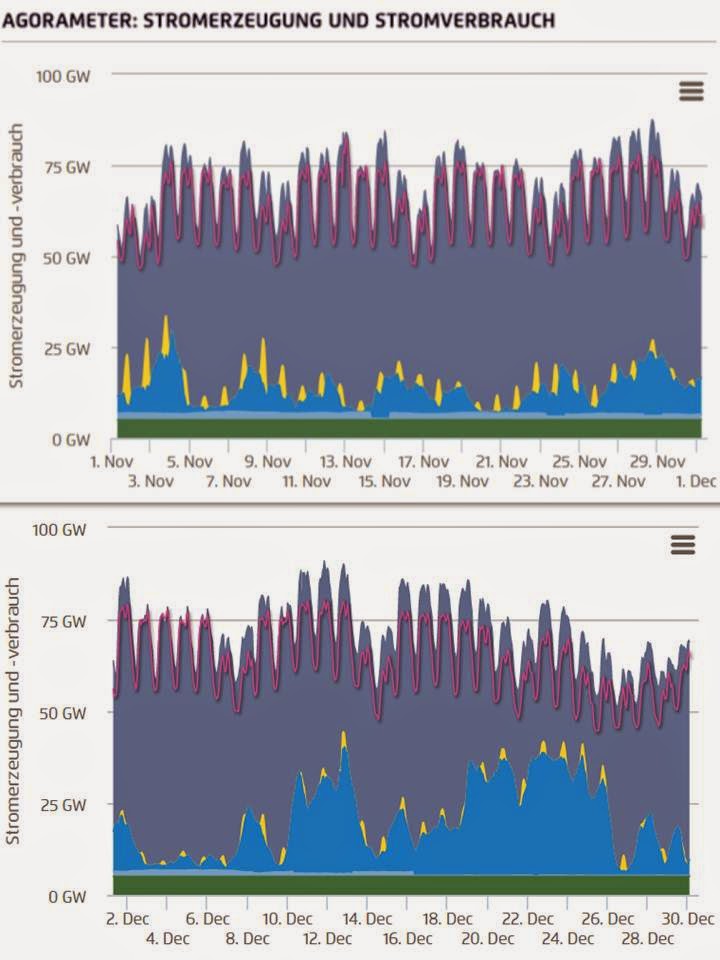 Bottomline: Governments should NOT intervene in electricity pricing, should NOT force, coerce and arm-twist all other electricity consumers to buy and subsidize from expensive and unstable power sources. Let consumers buy expensive electricity voluntarily so they can put their money where their mouth is. Those who are not convinced of such policy should not be coerced.
-----------