In my continuing debate with some members of the "Amend the Electric  Power Industry Reform Act (EPIRA)" fb group, I posted these 14 news stories there. Still very civil debate, something that  I  like.

Shale gas, not windmills, can free the continent from reliance on Russia.

Moscow's invasion of Crimea has now forced European governments to finally admit, among other inconvenient truths, that taxpayer-funded windmills will not deliver energy security, much less improved geopolitical leverage against Moscow. There are few silver linings to Russia's revanchism, but perhaps a serious European energy policy might be one of them. 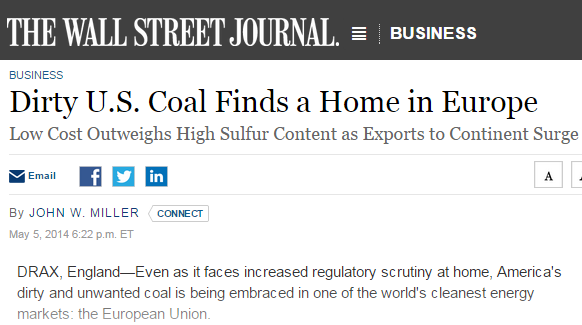 Low domestic demand has renewed the focus on U.S. exports, which are on track for a record-setting third straight year of more than 100 million tons. The 28-nation EU imported 47.2 million tons of U.S. coal last year, up from 13.6 million tons in 2003. Exports to the U.K. alone are up tenfold in the same period. The U.S. ranked second only to Russia in supplying Europe with coal last year, and the U.S. could further increase its market share if recent political tensions with Moscow disrupt Russian shipments.

Since 2003, German imports of U.S. coal have risen to more than 15 million tons from under a million tons. A spokesman for E.ON, Germany’s largest power and natural-gas utility, says it now purchases more than four million tons of coal a year, or 17% of its total, from the U.S., up from 800,000 tons in 2010. E.ON operates power plants in several European countries.

The average capacity factor — that is the output of an electricity-producing asset over a period of time divided by its maximum theoretical power output — was about 32 percent for wind power in the US over the past 3 years (Source). The Hawi Renewable Development Wind Farm is a little bit better than that at 45 percent, but for the 55 percent of the time that it isn’t producing power, backup is required. Often, intermittent renewable power power supplies are backed up by dirty and inefficient power.

When people talk about the intermittent nature of resources like the wind and sun, they are referring to the fact that there are times — often unpredictable — when these resources aren’t producing. At 7 am, the world is waking up and demand for electricity is climbing. At that early hour, and with the sun perhaps not yet shining brightly enough for solar power to contribute appreciably, back-up power is needed in areas like my neighborhood that utilize wind power when it’s available.

That is the nature of intermittent resources. People don’t usually think about the fact that if the wind isn’t blowing that an electric utility — somewhere — brings on line backup power." 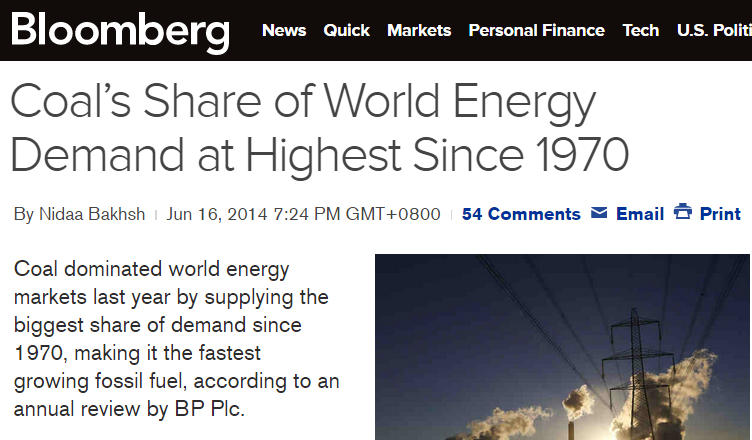 consumers are prioritizing cheap fuels over efforts to rein in greenhouse gas emissions blamed for global warming. Coal is the dirtiest fossil fuel, and use of it expanded at utilities fromChina to Germany.

Coal’s share of global energy use reached 30.1 percent, just below the 32.9 percent share for crude oil, which lost market share for a 14th consecutive year. China was the world’s biggest coal consumer, followed by the U.S. and India. 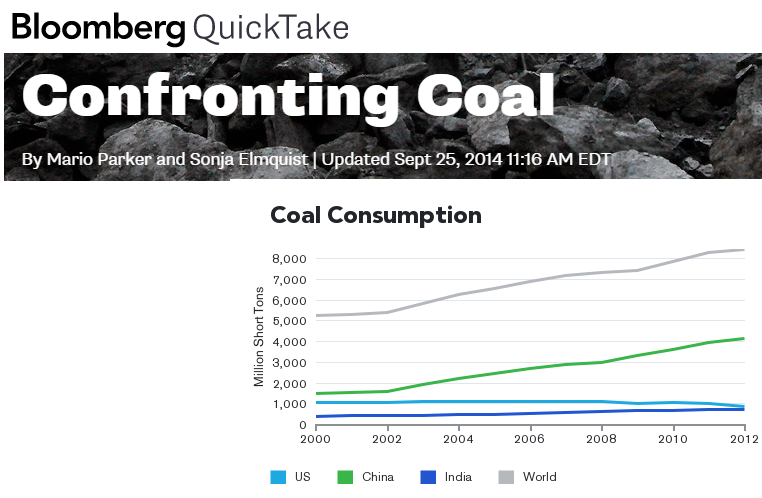 Coal ranks second among the world’s largest sources of energy. There’s enough to last for 132 years at 2012 production levels. China consumesas much of it as the U.S. does of oil,... In 2011, Germany’s appetite for coal increased to the highest level in four years after Chancellor Angela Merkel shut eight nuclear power stations following the Fukushima disaster in Japan... 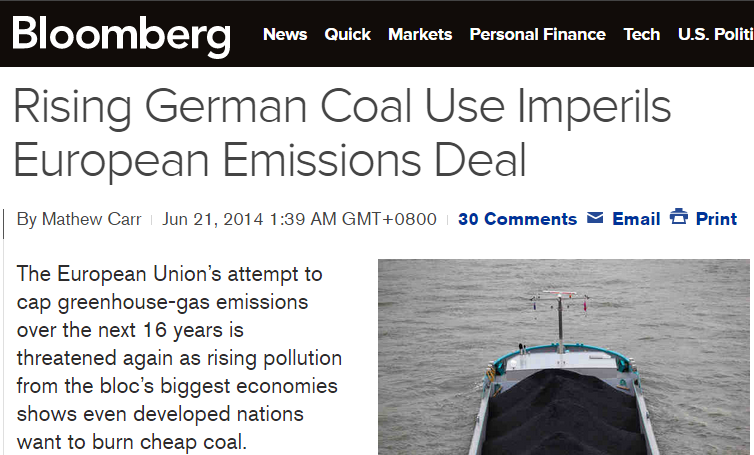 Germany, Europe’s largest economy, boosted consumption of the fuel by 13 percent in the past four years, while use in Britain, No. 3 in the region economically, rose 22 percent, statistics from oil company BP Plc show...

Germany’s emissions rose even as its production of intermittent wind and solar power climbed fivefold in the past decade....

German fossil-fuel emissions climbed 5.5 percent to 843 million tons in the four years through 2013, the BP data show. To meet its commitment, Germany would have to reduce its pollution by about 379 million tons, a further 45 percent. The BP statistics cover only fossil-fuel burning, which makes up about 88 percent of the nation’s greenhouse gas output. 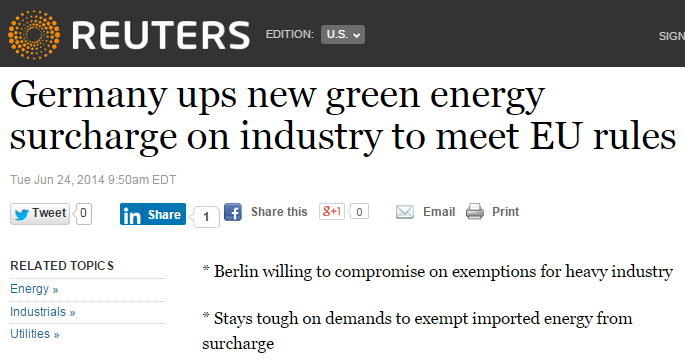 According to the new draft, industry producing its own electricity in new renewable or combined heat-power plants will pay 30 percent of the current 6.24 cents per kilowatt hour surcharge in 2015, rising to 35 percent in 2016 and 40 percent from 2016.

"It would be a massive own goal in terms of industrial policy if politicians were to put a surcharge on own power production used by many sectors for decades," German industry lobby BDI chief Markus Kerber said in a statement.

Subsidised renewable energy, led by wind and solar power, have sparked a political debate in Germany over high prices for consumers, who pay mandatory charges for green energy.

German consumers already pay the highest electricity prices in Europe. But because the government is failing to get the costs of its new energy policy under control, rising prices are already on the horizon. Electricity is becoming a luxury good in Germany . . .

For society as a whole, the costs have reached levels comparable only to the euro-zone bailouts. This year, German consumers will be forced to pay €20 billion ($26 billion) for electricity from solar, wind and biogas plants—electricity with a market price of just over €3 billion. Even the figure of €20 billion is disputable if you include all the unintended costs and collateral damage associated with the project. Solar panels and wind turbines at times generate huge amounts of electricity, and sometimes none at all. Depending on the weather and the time of day, the country can face absurd states of energy surplus or deficit.

Germany used coal, the dirtiest fuel, to generate 45 percent of its power last year, its highest level since 2007...

The transition, dubbed the Energiewende, has so far added more than 100 billion euros ($134 billion) to the power bills of households, shop owners and small factories as renewable energy met a record 25 percent of demand last year. RWE AG, the nation’s biggest power producer, last year reported its first loss since 1949 as utility margins are getting squeezed because laws give green power priority to the grids.

Europe faces power shortages in the next decade unless it balances its drive for low-carbon energy with investment in clean-coal and nuclear generation, according to the International Energy Agency.

Policy makers must boost incentives for coal-fired power that includes carbon-capture technology and spur investment in new atomic plants to replace aging reactors, Maria van der Hoeven, the executive director of the IEA, said in an interview. The investment in round-the-clock, or baseload, power is needed to cover intermittent wind and solar supply, she said.

“Not everything can come just from having more renewables,” van der Hoeven said in London on Nov. 12. “The system has to be stable so that the lights aren’t going to turn off the moment the renewables aren’t there. 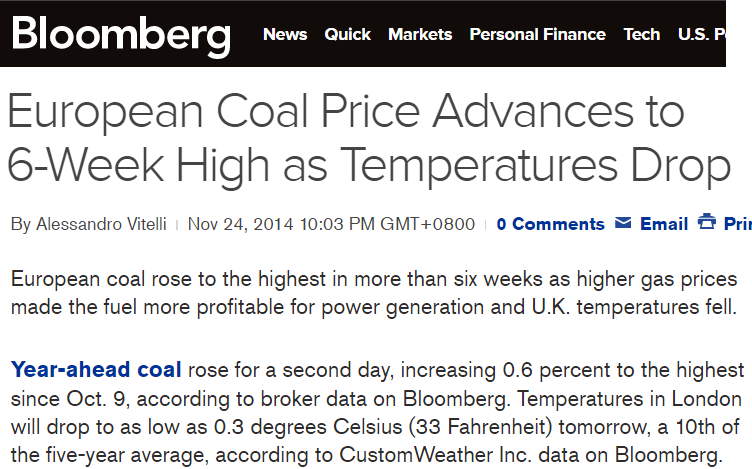 When it's too cold, Europeans run to coal, not wind or solar, to get warm. Again, not from WSJ, peks man  From Bloomberg again,

"Year-ahead coal rose for a second day, increasing 0.6 percent to the highest since Oct. 9, according to broker data on Bloomberg.

Stocks of coal at three import terminals in the Amsterdam-Rotterdam-Antwerp region dropped to their lowest in six weeks. Inventories fell 3.7 percent to 6.05 million tons from 6.3 million tons a week earlier,

When high subsidies are reduced or removed, many if not all renewable companies will be bankrupt. They survive only through expensive electricity being forced by governments to the consumers.

there are times when sun and wind combined were less than 2% of the needed supply. Unfortunately, power utilities simply cannot call Mother Nature up and place orders for power days in advance. They have to just take what Mother Nature sends, whether they want it or not, and German law says they have to pay for it even when they do not feed it in.
------------