The new Health Minister of Norway rocks. Being a libertarian or classical liberal, she knows the value of individual freedom and choice. Heavy smoking, drinking, skyjumping, downhill cycling,  head-buttin the ball in soccer, etc. are dangerous to one's health, people know that, but they do it anyway.

1. This Health Minister Says People Should Smoke, Eat And Drink As Much As They Want
David Nikel, Contributor  May 11, 2019, 02:39pm
https://www.forbes.com/sites/davidnikel/2019/05/11/this-health-minister-says-people-should-smoke-eat-and-drink-as-much-as-they-want/#6c626b731ffe

“I think people should be allowed to smoke, drink and eat as much red meat as they wish”, Listhaug told NRK. “The government can provide information, but I think people in general know what is healthy and what is not.”

Listhaug, who admits she is herself an occasional social smoker, also said she is increasingly sympathetic towards smokers. “They almost feel they have to hide away, and I think that's stupid. Although smoking is harmful, older people have to decide for themselves what they do.”

The outspoken right-wing nationalist is widely tipped to take over the leadership of Fremskrittspartiet (Progress Party) from Siv Jensen, Norway’s current Minister of Finance, in the years to come.

The party describes itself as “a libertarian party that believes in freedom for the individual, lower taxes, prosperity and a limited government that empowers people.” 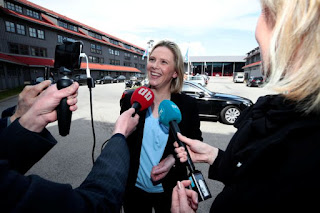 In a statement of her own, emailed Friday, Ms Listhaug said, "The government believes that people have to take responsibility for their own life, but the government has to make sure that everyone can make healthy and informed choices."

"The number of daily smokers has declined sharply since 2000," Ms Listhaug said. "This confirms that the Norwegian tobacco policy and control strategy works."

Ms Listhaug said people who smoked felt like "pariahs" in Norway, and that she would not be the "moral police" in government. She echoed comments made by Austria's far right, defending freedom of choice in opposing anti-smoking legislation.