* This is my article in BusinessWorld last Friday, May 17, 2019. I forgot to mention the Institute for Democracy and Economic Affairs (IDEAS, Malaysia) as co-sponsor of the seminar when I submitted my paper to my editor. IDEAS helped a lot in organizing that event.

The first presentation was “The Policy Ingredients for Innovation: Lessons From Abroad” by Nigel Cory, associate director for trade policy of the Information Technology and Innovation Foundation (ITIF, US). Nigel emphasized that intellectual property rights (IPRs) are essential for innovation because they (1) Create incentives for innovation and help repeat it in a virtuous cycle, (2) Induce knowledge spillovers that help others to innovate, (3) Attract investment and ensure companies can focus on innovating, (4) Promote the international diffusion of technology, innovation, and knowhow, and (5) Boost domestic levels of exports, R&D, and FDI.

The second paper was “The Role of IPR for Asian Development” by Philip Stevens, founder and director of Geneva Network. Philip showed a ranking of Asian economies, from the most to least innovative, in the Global Innovation Index (GII) 2018 Report. I added the GII 2012 Report here to show changes in global ranking and scores of selected economies (see table). 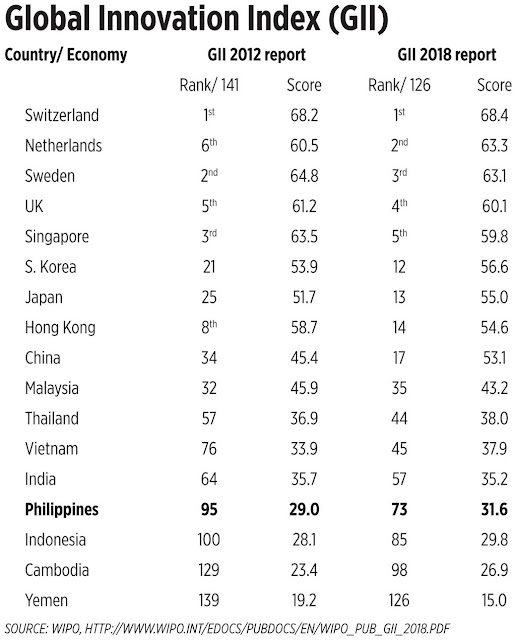 Third paper was “IPR and Access to New Technologies” by Amir Ullah Khan, professor at Maulana Azad National University in India. Amir showed some glaring health data in India: 1 government doctor caters to 11,082 people, 1 government hospital bed to 1,908 people, and 80% of the population do not have significant health coverage.

Then he showed the negative impact of heavy government interventions like drug price control and patent-busting compulsory licensing: “With non-availability of cancer drugs, price controls have had a depleting effect on the efforts towards development of new antibiotics. Of the 18 largest pharma companies, 15 have stalled work in antibiotics due to economic, regulatory and scientific obstacles.”

Fourth and last paper was on “Emerging Policy Threats to Innovation” by Azrul Mohd Khalib, founder of the Galen Center for Health and Social Policy in Malaysia. Azrul discussed the IPR on health polices in four ASEAN countries. In Indonesia for instance, amendments to the Patent Law would require that the manufacture of patented products and use of patented processes should take place in the country. In Malaysia, there is concern on IP protection and enforcement because the government has either issued or threaten to issue compulsory licensing.

The Philippines has shown improvement in global ranking and score but it still belongs to the bottom half in ranking as shown in the above table. Now there is growing appreciation about the importance of innovation and IPR protection.

While many Asian countries appreciate the value of innovation, there seems to be less appreciation on the value of IPR protection. As pointed out by Philip, among the weaknesses in Asian innovation are counterfeiting (3.3% of global trade in 2016, higher in Asia), online piracy, more difficult to secure and defend patents (compulsory licensing, restrictive patentability criteria like in Thailand, average of 16 years to gain a pharma patent).