On PH's ratings upgrade by S&P

In 2018, PH taxpayers paid P349 billion interest payment alone (principal amortization not included yet) for the huge government debt stock of P7.78 trillion. Now S&P has given the PH a ratings upgrade and many people are applauding. https://business.inquirer.net/269573/surging-economy-earns-ph-highest-credit-rating-in-history

What S&P signals to lenders and creditors is that it is ok to keep lending big time to the PH (around P 0.5 trillion a year) because in place are new taxes and tax hikes to make sure that lenders will be fully paid tomorrow.

Meanwhile, a lot of ratings upgrade occurred in the previous admin. Duterte inherited the momentum. 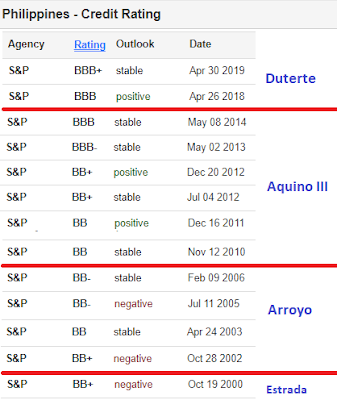 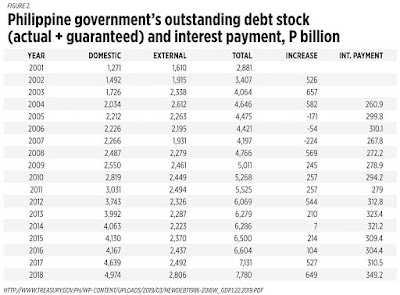 The big decline in debt/GDP ratio, from 52% in 2010 to 42% in 2016, occurred in the previous admin. Duterte team just inherited the wisdom of control-thy-borrowings of the previous admin, now they spend and borrow big time because there are many new taxes and tax hikes in place.

In ordinary household, social enterprises and private enterprises, people learn to save. Emergencies like a family member is terribly sick, heavy borrowing is justified, on top of selling and disposing some household assets and properties. When things normalize, people save and pay back their loans, and things move on.

In government, it's different. With or without emergencies, just borrow-borrow-borrow, no exception. And people clap and applaud government for its 'fiscal prudence.' Lousy.

Meanwhile, should the upgrade be rescinded?