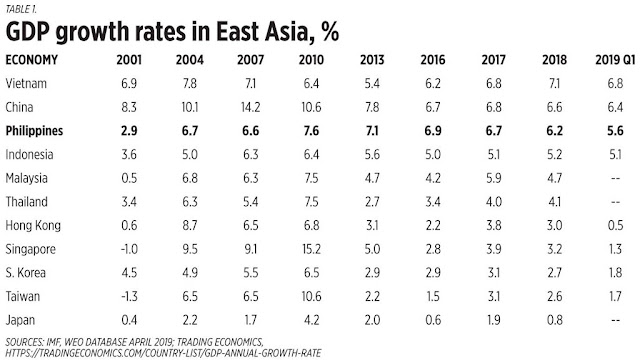 To help answer this question, recall this equation in basic macroeconomics:

So the two main reasons for our growth deceleration are the following.

“The budget impasse in Congress during the first three months of the year set off a spending cutback, which, in turn, stifled economic activity… This resulted in underspending of about P1 billion pesos per day, equivalent to P80-90 billion in disbursements for the first quarter of 2019. Were it not for this, the economy could have received a tremendous boost from much higher state spending… economy should have grown by at least one percentage point higher, at 6.6 to 7.2 percent in the first quarter, if the 2019 fiscal program had been approved on time.”

Dangerous philosophy, wrong prognosis by this administration. Why?

One, more state spending which requires more state taxation, more public borrowings would mean more growth? Wrong. As shown in table 2 above, growth deceleration in C and I, decline in private consumption and private investments, are the main reasons why overall GDP growth has been declining from 2016 to Q1 2019.

Two, G is small, only 9% share of GNI, and even a high G growth of 13% in 2018 failed to uplift the overall growth that year. Populist if not socialistic philosophy of more state spending, more taxation, is an ideological dinosaur that persists until today.

It is good that independent and opposition candidates like Serge Osmeña are explicit in campaigning for abolishing the oil tax under the TRAIN law as an election issue.

Significant tax cut will increase consumer confidence, C will pick up and it will pull up overall growth. TRAIN law’s cut of personal income tax (PIT) was a good move but the various tax hikes were not, they erased and negated the good will in PIT cut.

The pending TRABAHO bill (previously called TRAIN 2 bill) has been causing investment uneasiness, among the reasons why growth of I has decelerated to only 5% in Q4 2018, 7% in Q1 2019.

Hoping that the victorious senatorial and congressional candidates will introduce VAT rate cut from 12% (highest in East Asia) to 10%, even 8% in exchange for drastic reduction in exempted sectors.
--------------