“AYALA LAND, Inc. (ALI) is riding on the influx of Chinese firms coming to the Philippines as it plans to acquire up to 200 hectares of land in Central Luzon.”

No details were given in story #1, the Ayala conglomerate is also cashing in on growing China investments in story #2, and Udenna seems to be the main entry point for more China investors.

Is the Philippines slowly being swamped by China capital, China imports, China tourism and visitors?

I checked relevant data to help me answer this question. On merchandise exports, China is the fourth market of the Philippines in 2018 while its dominance as #1 source of imports is further cemented in 2017-2018 (see table 1).

In foreign direct investments (FDIs), investors from China catapulted to #4 in 2018 with nearly $200 million, from below $30 million in 2016-2017. Investors from Singapore, Hong Kong and Japan remain the top sources of long-term capital in the Philippines (see table 2). 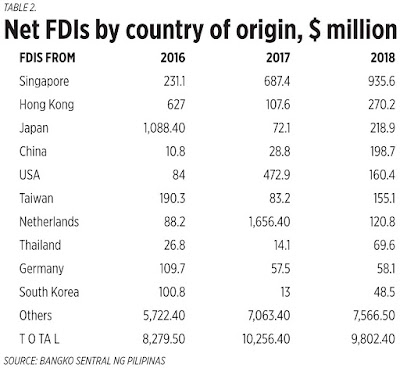 And in tourism, Chinese tourists are inching fast with nearly 1.3 million visitors in 2018, hoping to dislodge S. Korean visitors in a few years while visitors from the US including Filipino-American balikbayans have also breached the 1 million level (see table 3). 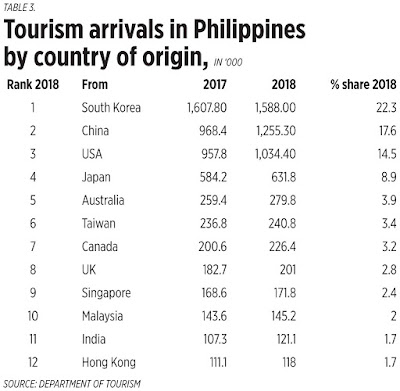 China is known for large-scale secrecy in business and political numbers, there is a tendency to understate or overstate certain figures. The imports from China figures, while already big, should be much bigger as it is common knowledge that large-scale smuggling occurs until now and most of the goods easily land in Divisoria, Quiapo, Baclaran, and other big mass-market areas.

The market-oriented reforms for efficiency (MORE) needed is to have more transparency in the actual number of workers, tourists, businesses, investments, imports from China. The DOF, DOLE, SEC, etc. are known to be strict with Filipino businesses but they seem to be grappling for regulations and taxation of these Chinese enterprises. President Duterte’s favoritism with China and Xi Jinping need not be followed by the line agencies. More on China later.
---------------