BWorld 330, Energy and elections: The Philippines and Australia

Sydney – The Philippines held its mid-terms elections last May 13, and “man-made” climate change, “more renewables” were marginal if not non-issues altogether for many of the national and local candidates. The energy issue was whether there would be any blackout because of the series of yellow and red alerts (insufficient power supply and reserves) many weeks before Election Day.

On May 18, Australia also held its federal elections, and for the Labor Party, among their big issues were climate alarmism, reducing carbon emission by 45% by 2030, and closing the Adani mine, with various surveys showing they would win. The Liberal Party campaigned for energy realism, and cheaper and stable electricity for a stronger economy. They won and PM Scott Morrison is reelected.

PM Morrison once brandished a lump of coal in parliament, saying, “This is coal – don’t be afraid!” True. There is nothing scary about coal but there is something to thank for it – because among the world’s biggest and industrialized economies are heavy coal users. The Philippines, having more coal plants recently and demonized by many anti-coal activists and climate alarmists, is actually a “midget” or small-time coal player in the world, even in Asia (see table). 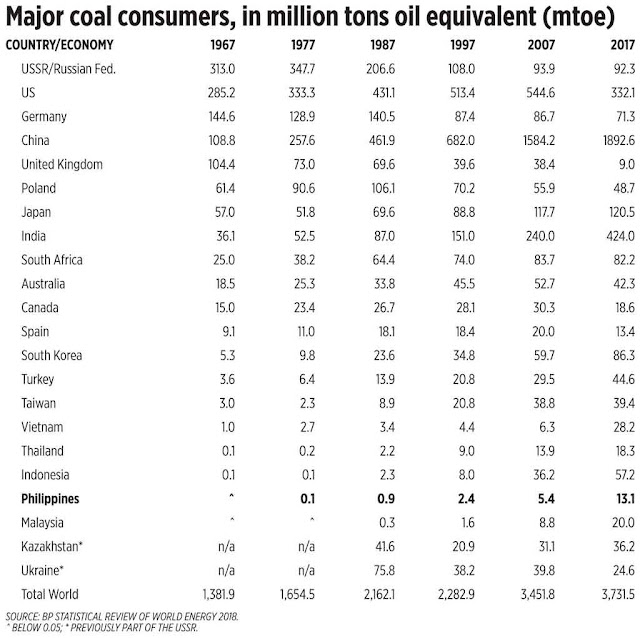 Two recent reports in BusinessWorld show that the problem of power inadequacy continues and I quote portion of the reports:

“’Those that exceeded the outage allowance under the contract should not be charged on consumers, but on the generating company that failed to deliver.’ At present, the obligation to provide replacement power depends on the provisions of the PSA between a distribution utility and a generation company.”

Both reports 1 and 2 would tend to restrict leeway for existing gencos and power plants when the bigger issue is how to have more power capacity, more gigawatts of new, stable electricity to be added into the system, something like 1.5 GW a year or more. When there is more power available, some DUs may contract just half of their needs and get the other half from the wholesale electricity spot market (WESM), even without new DOE or ERC regulation.

Meanwhile, I am here in Sydney to attend two big events, the ALS Friedman Liberty Conference by the Australia Taxpayers Alliance, and the biennial World Taxpayers Association (WTA) conference, May 23 to 26, 2019. Energy security and more power competition is among the topics to be discussed in some panels.
--------------------