A report in BusinessWorld reiterated the value of IPR protection: “PHL remains out of US IPR watch list for 6th year’ (April 27, 2019)

“FOR the sixth straight year, the Philippines was not included in the US government’s watch list of countries with weak protection of intellectual property rights (IPR)… after being included from 1994 through 2013,” the report said in part.

Good news then. Last week, April 26, was World Intellectual Property Day as declared by WIPO with the theme, “Reach for Gold: IP and Sports.”

“When IPRs are protected, markets are formed that encourage innovators to compete to make the next breakthrough product consumers demand — be it training equipment, a smart sensor, or a new media platform. In this way, athletes and innovative markets are sure to always go faster, stronger, higher! Neither innovation nor sport can exist without enforceable property rights.”

Global ranking in IPR protection and innovation in East Asia 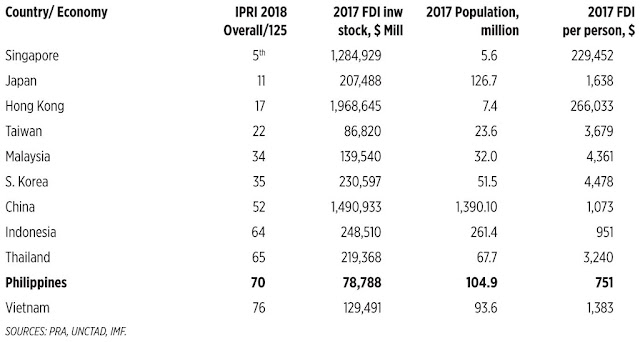 More property rights protection, more investments. Japan is the exception here because Japan is the main source, not destination, of FDIs in many countries abroad. On May 15, the Geneva Network (UK) will hold a one-day seminar and meeting of Asian free market think tanks, institutes and academics doing work on IPR protection and trade to be held in Kuala Lumpur.

And on May 24 or 25, PRA (US) will hold a side event on IPR and investment promotion in Sydney during the 17th meeting of the World Taxpayers Association (WTA) conference and the 7th Friedman conference by the Australia Taxpayers Alliance.