1. Lower inflation. The April 2019 inflation is 3.0%, dubbed as the “lowest inflation since January 2018” and hence, good news. This is only half of the story. The other half is that even such “low inflation” is actually the highest among the more mature economies with updated numbers in East Asia, both year to date (ytd) 2019 and full year 2018. Dutertenomics should be ashamed of this (see table 1). 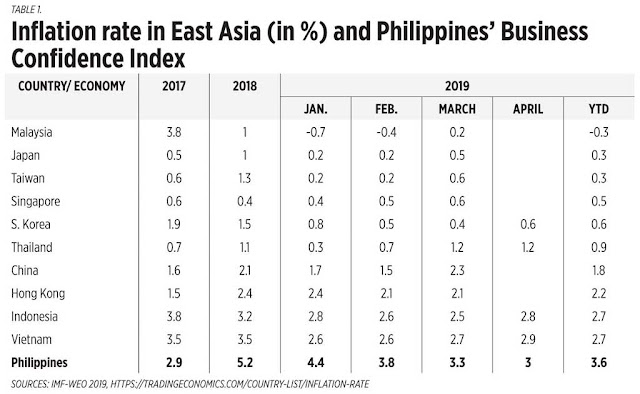 2. Ratings upgrade. S&P’s ratings upgrade for the Philippines to BBB+ was credited to President Duterte and the leader of the Dutertenomics team, the DOF. Again, that’s only half of the story. The other half is that while the Philippines suffered lots of mediocre if not negative outlooks under the Ramos, Estrada and Arroyo administrations, things reversed to lots of upgrades under the Aquino administration. Dutertenomics simply inherited the momentum (see table 2). 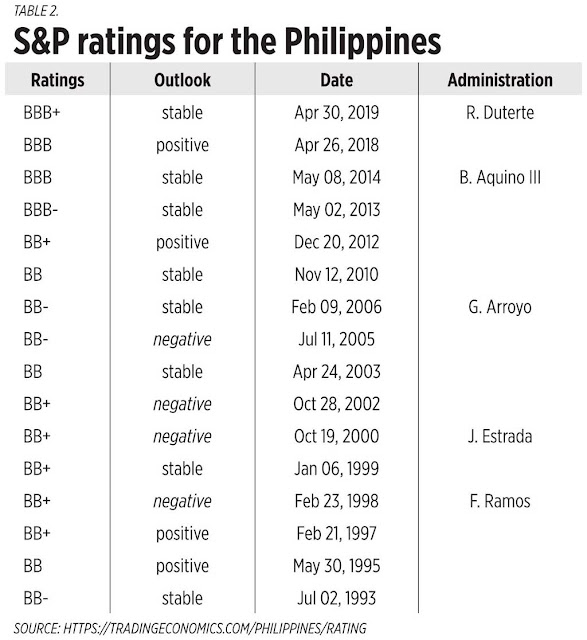 3. Sectoral deterioration. Using 2010 (last half-year of Arroyo and start half-year of Aquino administrations) as reference year, we compare numbers over the past four years.
a. Business confidence has been declining.

b. Ease of doing business global ranking improved, then declined.

d. Public debt has been rising big time in the last two years.

e. Public debt/GDP ratio declined big time 10% from 2010 to 2016 or just six years, then the ratio has stopped declining under Dutertenomics.


Voters should remember these and penalize the Duterte/Hugpong candidates. Support independents like Serge Osmeña. The market-oriented reforms for efficiency (MORE) is to reverse the irrationality of many tax hikes to finance huge current and future over-borrowings by Dutertenomics especially for China ODA.
-----------------